Hannah soon learned that being surrounded by flames was not the best time to strike a pose. Photos: Warner Bros

As survival flicks go, there have been far better (Deliverance) and significantly worse (a long and varied menu) than Those Who Wish Me Dead (TWWMD), which stars Angelina Jolie as a traumatised smoke jumper.

Given that it's directed and co-written by Taylor Sheridan, who wrote the Sicario films, from a novel by acclaimed crime and supernatural fiction writer Michael Koryta, one did have rather high hopes.

The movie clearly has ambitions for its principal characters, but spreads its attention around too many others.

Therefore, it ends up in solid thriller territory, like The River Wild or Cliffhanger (to name a couple of other outings that saw good guys going up against criminals and against the elements) but falls short of being great.

One year on from a devastating forest fire that left her devastated because she failed to "read" the wind and thus feels responsible for the lives lost there, Hannah (Jolie) is consigned to a solitary lookout tower in her neck of the Montana forest.

Her path, or lack of one, somehow crosses with that of young Connor (Finn Little), a 12-year-old boy on the run from two merciless assassins (Aiden Gillen and Nicholas Hoult). Oh, and the forest is on fire too.

While that setup ought to be enough on its own, other characters get tossed into the mix, like local sheriff Ethan Sawyer (Jon Bernthal) and his pregnant wife Allison (Medina Senghore).

At a relatively lean running time of 100 minutes (counting the credits), making room for these folks forces TWWMD to merely gloss over Hannah's trauma and the transformative effect of her struggle to help Connor. 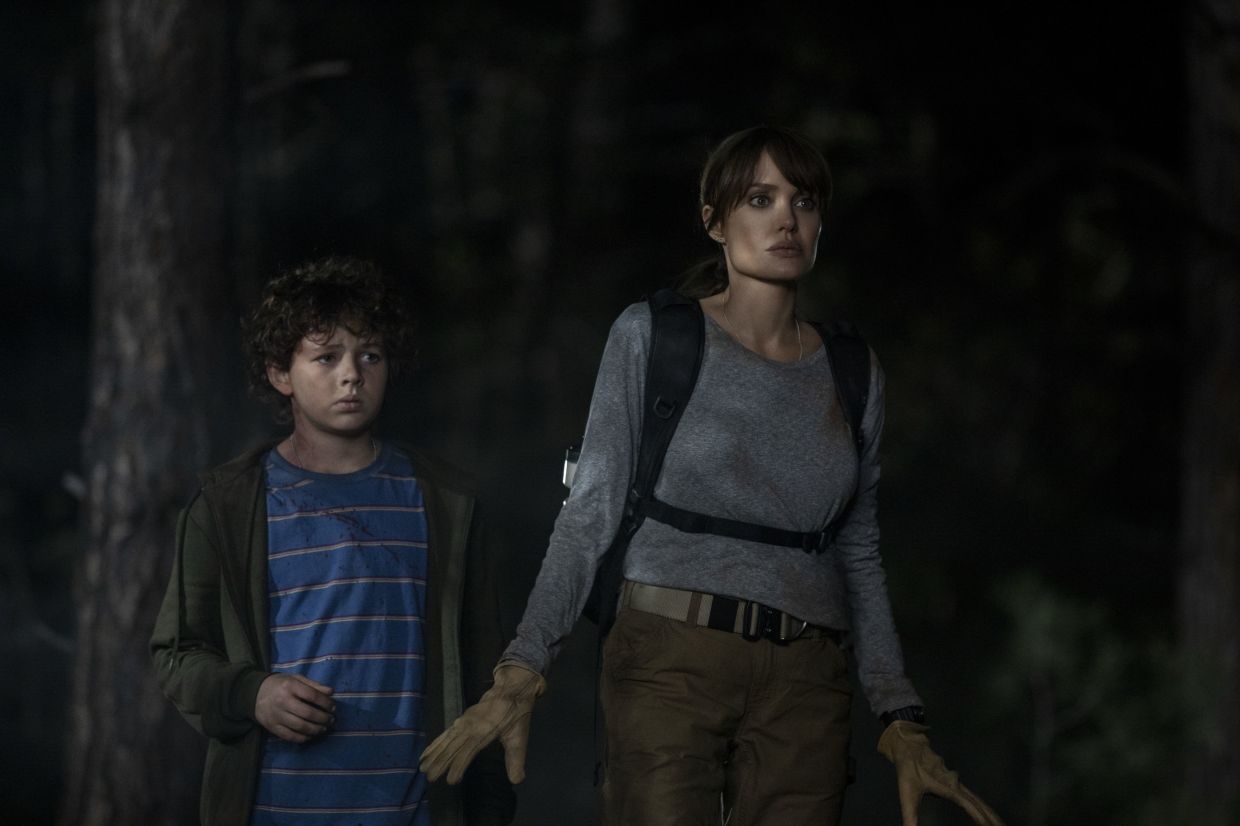 'Beware the moon and stick to the road, those nice men at the pub warned us. But did we listen?'

While it is refreshing to see generally disposable supporting characters like Ethan and Allison actually influence the unfolding drama, the time could really have been put to better use fleshing out the Hannah-Connor dynamic (good enough for what we do get of it) and even the unstated relationship between the killers.

After all, this kind of conflict/contrast would be just the kind of thing to elevate TWWMD above just being competently made.

Jolie certainly has the chops to deliver more subtlety than just the bursts of recklessness and broad strokes of trauma we see in the film's early moments. And young Little shows a capable grasp of the emotional extremes that his character is forced through, too.

So it's somewhat of a letdown that this capable-seeming pair was not given the room to run a little farther afield, keeping TWWMD at a level of purely visceral entertainment, neither stirring the heart nor capturing the imagination.

Competent but unremarkable survival action thriller treats its supporting characters well, at the expense of its principal ones.

Angelina Jolie , Those Who Wish Me Dead