'Like You Do' comprises eight English-language tracks including a collaborative track with Anne-Marie.

After conquering the Mandopop charts, Singaporean singer JJ Lin has his sights set on the English market next.

The 40-year-old released his first English album, Like You Do, on April 23.

The eight English-language tracks are predominantly uptempo with the exception of Steady My Love and the penultimate track, Bedroom.

The latter is a searing ballad which sees him collaborating with one of UK's hottest pop sensations, 2002 hitmaker Anne-Marie.

"Every song is a reflection of the darker version of myself. And I've found a sense of healing, by reaching in and realising that true strength is found in embracing every version of the self," he wrote about the album on Instagram.

While this is Lin's first English album, the singer has released a number of English tracks over the years, scattered across his 14-album career including Until The Day, Stay With You (duet with Stefanie Sun) and I Am Alive (duet with Jason Mraz).

Wang Leehom's singing app reportedly made RM21mil within a month 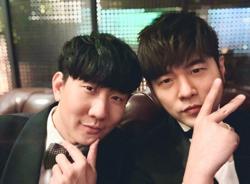