Henry Golding shows off his action figure, based on the character he plays in the upcoming ‘Snake Eyes’ film. Photo: Henry Golding/Instagram

“Holy moly! That’s my face!” Golding said at the likeness of the Snake Eyes action figure.

“It’s even got the beard there, too! That's crazy."

The toy line also has figures based on the film's depictions of Andrew Koji as Storm Shadow, Ursula Corbero as the Baroness, Samara Weaving as Scarlett, and Haruka Abe as Akiko.

On the figure’s arm, Golding pointed out, is the classic Arashikage sign, which is the ninja clan that Snake Eyes belongs to.

"The story behind that (sword) will be told in the movie," Golding said. In an interview with EW.com, Golding said this about the film: “I think the heart of the story really is who Snake is and his journey as a person, really. Understanding his motivations.

“We start from the beginning. And, hopefully, this launches an amazing franchise."

This new film, directed by Robert Schwentke, was filmed in Japan and is said to be incorporating elements from Japanese cinema.

Schwentke had told EW: “We’re playing around with a lot of ideas that are very specifically Japanese and we’re trying to get them right. I think that will make this film very, very special.”

According to Golding’s post Snake Eyes will open in cinemas on July 23,2021, but no date has been confirmed for Malaysia release as of now. 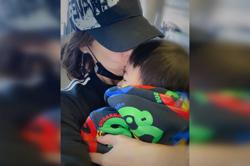