The Trial Of The Chicago 7 was judged the year's Best Performance at the prestigious Screen Actors Guild Awards on Sunday (March 4, US date) – a verdict that strengthens the film's case for the Oscars later this month.

Aaron Sorkin's courtroom drama based on 1968 US anti-war riots – and the infamous trial that followed – took top honours at the prize-giving, which was whittled down to a virtual one-hour broadcast due to the pandemic.

"We need leaders to guide us toward hating each other less," said Frank Langella, who plays the civil rights-themed film's racist judge.

"We owe a debt of thanks to the voices of the Chicago 7 – and especially Aaron Sorkin, our leader – whose voice is the soul of this movie," he added, referring to the trial's seven defendants. 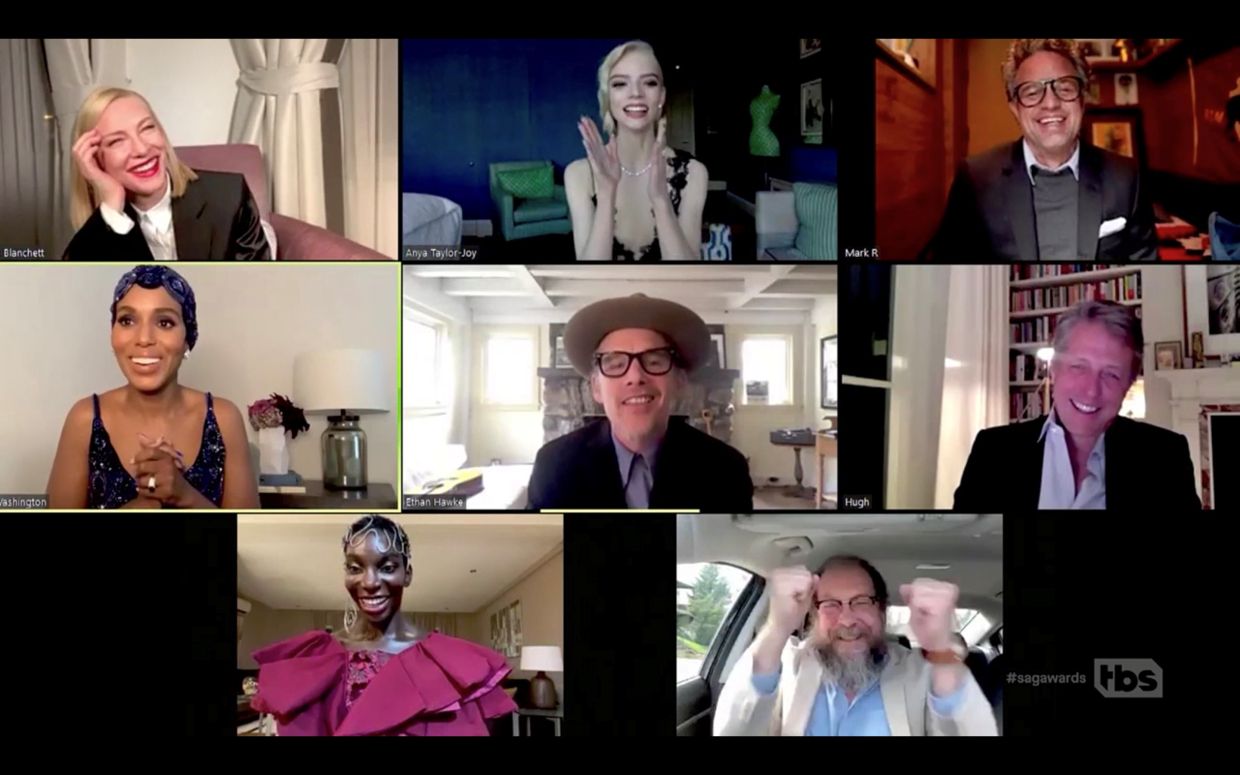 Actor Mark Ruffalo (top right) wins the Actor For Outstanding Performance By A Male Actor in a Television Movie or Limited Series for 'I Know This Much Is True' in this screen grab from the 27th Annual Screen Actors Guild Awards in Los Angeles, California, on April 4, 2021.

The SAG awards are a vital stop on Tinseltown's annual prize-giving circuit, which climaxes this year with the delayed Academy Awards on April 25.

Typically a star-studded ceremony in their own right, the SAG awards were a pre-taped, hostless and bare-bones affair Sunday – but they remain a key predictor of glory at the Oscars, where actors are the largest voting bloc. 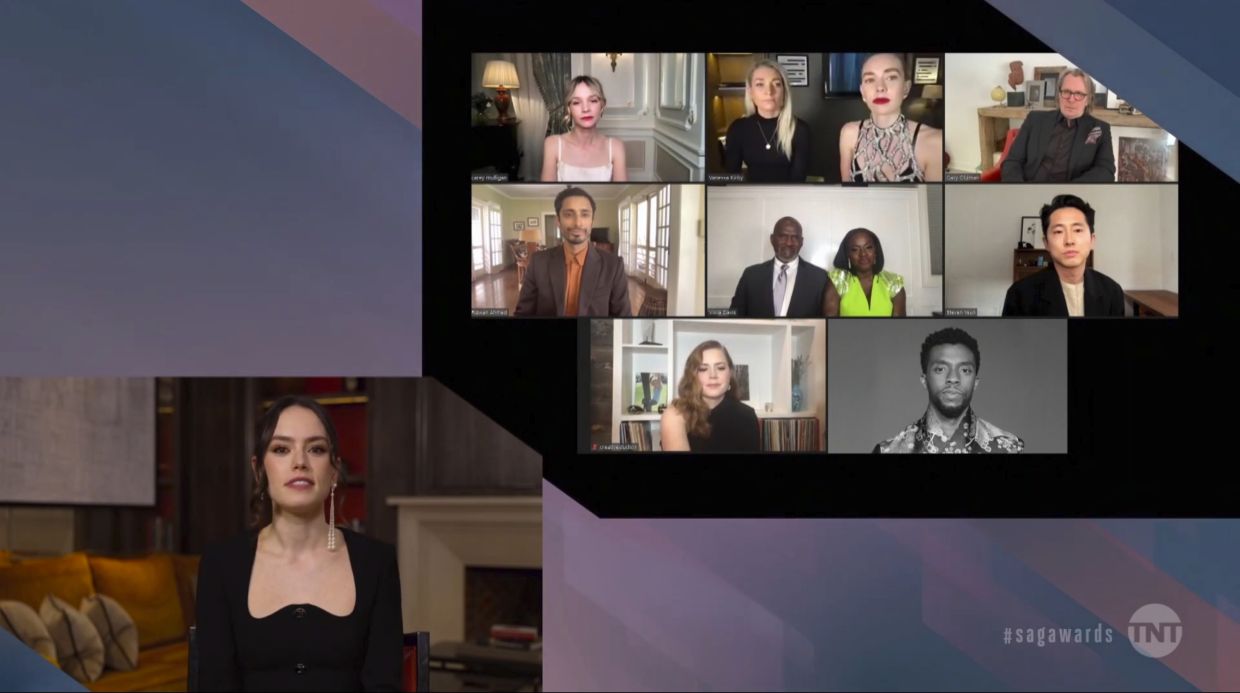 While Chloe Zhao's road movie Nomadland remains the favourite for this year's top Oscar, having already won multiple awards including Golden Globes, it did not even receive a cast nomination from SAG.

Davis thanked "the beautiful Chadwick Boseman," while his widow Taylor Simone Ledward – accepting his prize – quoted Boseman: "If you see the world unbalanced, be a crusader that pushes heavily on the seesaw of the mind."

The late Black Panther actor was also honoured in the annual "in memoriam" segment, along with leading stars who died this year including Sean Connery and Christopher Plummer.

In a year that has seen Hollywood boost minority representation on both sides of the camera, Daniel Kaluuya was named best supporting actor for his portrayal of Black Panther leader Fred Hampton in Judas And The Black Messiah. 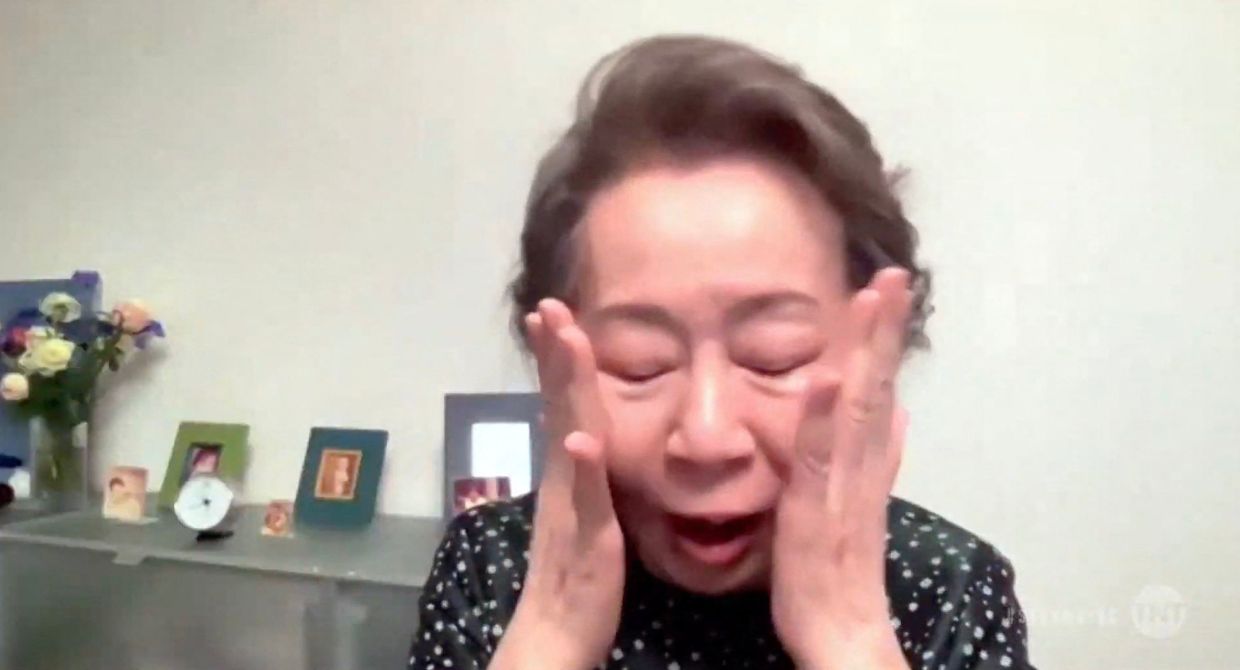 Youn Yuh-Jung accepts the award for Outstanding Performance by a Female Actor in a Supporting Role ('Minari').

She went one better than Parasite by winning an individual SAG prize – Supporting Actress – for Minari, an immigrant tale set in 1980s Arkansas.

"I don't know how to describe my feelings, being recognised by Westerners... everything is not familiar!" she said, visibly shocked and in slightly broken English.

But the film, along with Ma Rainey, One Night In Miami and Da 5 Bloods – all featuring Black casts – lost the night's final prize to Chicago 7, which now has the best shot at unseating Nomadland as Oscars voting begins April 15.

The ceremony opened with a skit from the British soccer team of Ted Lasso, with Jason Sudeikis – the comedy's clueless American coach – giving a rallying team talk: "Y'all, let's focus up. We've got a big night ahead of us, the SAG Awards." 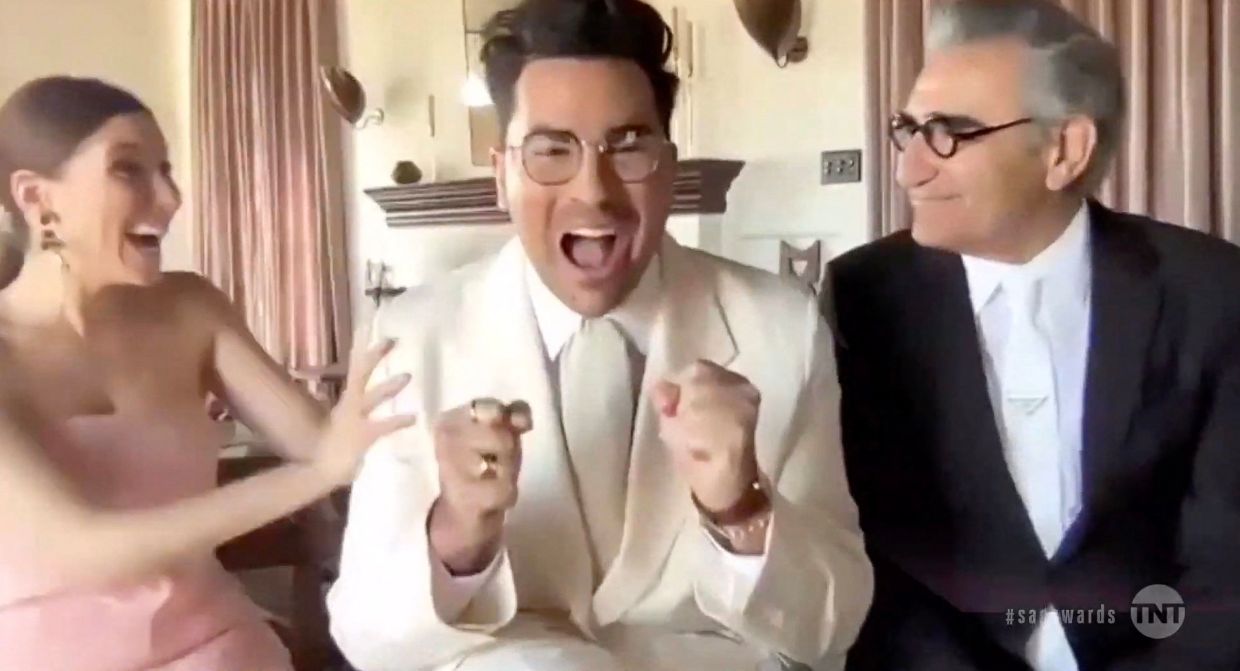 Daniel Levy (centre), his sister (left) and father Eugene Levy (right) accept the award for Outstanding Performance By An Ensemble in a Comedy Series for 'Shitt's Creek'.

Awards were interspersed with actors reflecting on their careers, and how they spent their pandemic-confined year – Helen Mirren apparently "chased away" a bear from her home in the western US Sierra Nevada mountains.

In limited series, Mark Ruffalo and Anya Taylor-Joy followed up their Golden Globe wins for I Know This Much Is True and The Queen's Gambit. – AFP 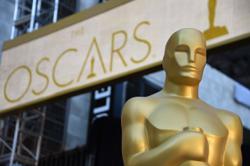