With the establishment of Avatar Studios, fans can look forward to many more original animated series and movies based on 'Avatar'. Photo: Variety

Avatar: The Last Airbender fans had their dreams of more content based on the beloved animated series and its sister spinoff squashed last year when the series' creators Michael DiMartino and Bryan Konietzko stepped away from a planned live-action adaptation project at Netflix last August.

But today, Nickelodeon announced that the world of Avatar and The Legend Of Korra is finally getting the content expansion that people who grew up watching the programs have been yearning for with the establishment of Avatar Studios.

The newly formed content division is designed to create original animated series and movies based on Avatar, and the first project under the studio banner is an original animated theatrical film to begin production this year.

The output will debut on platforms including Paramount Plus, on Nickelodeon's own linear and digital platforms and on third-party platforms and in theaters.

Original creators and executive producers DiMartino and Konietzko have signed on to serve as co-chief creative officers of Avatar Studios, reporting to Ramsey Naito, president of Nickelodeon Animation.

"Avatar: The Last Airbender and Korra have grown at least ten-fold in popularity since their original hit runs on Nickelodeon, and Ramsey Naito and I are incredibly excited to have Mike and Bryan's genius talent on board to helm a studio devoted to expanding their characters and world into new content and formats for fans everywhere," said Brian Robbins, president, ViacomCBS Kids & Family.

Avatar: The Last Airbender aired for three seasons on Nickelodeon from February 2005 to July 2008. During its run, the series picked up multiple Annie Awards, Genesis Awards, a Primetime Emmy Award, and a Peabody Award.

The highly acclaimed show follows the adventures of Aang and his friends Katara, Sokka and Toph, who must save the world by defeating the warring Fire Nation.

The sequel series, Legend Of Korra, aired for four seasons from April 2012 to December 2014, and has been translated into more than 25 languages. Its first season drew nearly 3.8 million viewers per episode, the highest for an animated series in 2012.

The Legend Of Korra, set in a more modern version of the world of Avatar 70 years later, follows the journey of a 17-year-old female Avatar trying to live up to her predecessor and using her mastery of all four elements to confront political and spiritual unrest.

The live-action version of the original hit Avatar: The Last Airbender was first ordered at Netflix in September 2018. By August 2020, creators DiMartino and Konietzko had departed the project after two years of development work.

A source with knowledge of the project told Variety that the Netflix series is completely independent of the Avatar Studios deal and that the live-action series is still moving forward at the streaming platform.

It is the only-live action Avatar project based on the franchise to date. – Reuters

'Calmtainment' is the new trend for relaxing programming 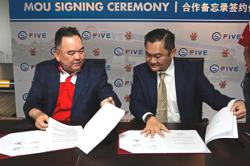