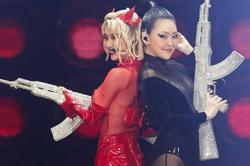 Some netizens have said that Barbie Hsu looks 20 years younger than her age. Photo: Dee Hsu/Facebook

Taiwanese television host Dee Hsu shared a photo recently of her sister Barbie Hsu striking a pose in front of the camera, drawing much attention on social media.

The 44-year-old actress won praise for her age-defying look while posing in front of a grey wall in a cozy long black trench coat and sporting a pair of knee-high boots.

The 42-year-old host accompanied her Facebook post with the caption: “She looks so chic! Who is this girl?”

The post has attracted many comments from social media users, with many saying that they mistook Barbie for Dee’s eldest daughter Elly Hsu or entertainer Aya Liu.

In response to the photo, some said that she looks 20 years younger than her age while others said Barbie and Dee look very alike.

Barbie is best known for her lead role in the 2001 television series Meteor Garden.

In 2010, Hsu married Chinese entrepreneur Wang Xiaofei in a civil ceremony in Beijing.

They have two children: a daughter, Wang Hsi-yueh and a son, Wang Hsi-lin. – The China Post, Taiwan/Asia News Network