"Please don't mistake this as me being ungrateful, these are just my thoughts," the singer on feeling his work should fall under the Grammys R&B category instead of Pop. Photo: Justin Bieber/Instagram

But on a day when such major R&B artistes as The Weeknd, Alicia Keys, Summer Walker and Kehlani were shut out of the Grammy nominations completely, Bieber took to Instagram to complain about being nominated in Pop categories instead of R&B.

"To the Grammys," he wrote (Variety has added punctuation to his post). "I am flattered to be acknowledged and appreciated for my artistry. I am very meticulous and intentional about my music. With that being said, I set out to make an R&B album. Changes was and is an R&B album. It is not being acknowledged as an R&B album, which is very strange to me. I grew up admiring R&B music and wished to make a project that would embody that sound.

"For this not to be put into that category feels weird, considering from the chords to the melodies to the vocal style, all the way down to the hip-hop drums that were chosen, it is undeniably, unmistakably an R&B album!

"To be clear," he concluded,"I absolutely love Pop music, it was just wasn't what I set out to make this time around. My gratitude for feeling respected for my work remains and I am honored to be nominated either way."

He added in a comment, "Please don't mistake this as me being ungrateful, these are just my thoughts take em or leave em. Thank you to the people who fought for me to even have any noms."

Grammy nominations are selected by experts in their respective genres, primarily comprising artists, producers, songwriters and executives, and Pop is a field that is often a point of contention or confusion: An artist who is popular, like Post Malone or Macklemore, may be rejected by a genre committee, like Rap, because the people on that committee consider them to be Pop artistes.

Such a conflict may be a contributing reason as to why The Weeknd was shut out of genre categories this year, as the Pop committee may have considered him R&B and vice-versa.

In that context, it is difficult to imagine the R&B committee considering Bieber's lite take on R&B music to be suitable for the category. Such distinctions are not taken lightly by the committees.

Grammy interim president/CEO Harvey Mason, jr. told Variety, "The people [in the committees] are music professionals – they are excellent, at the top of their craft in songwriting and producing, and there are a lot of artists. They critically [listen] to every song that comes across their desks. We listen to all the music – even an album, you're listening to almost the whole album, it takes I don't know how many hours. It's a long, arduous process and people take pride in it." – Reuters 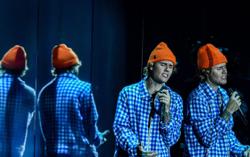