Malaysian director Chong Keat Aun bagged the Best New Director award for his film The Story of Southern Islet, a film inspired by a true incident that happened in the 1980s at Kedah's Gunung Keriang.

The film, which was also nominated for Best Original Screenplay, is about a desperate wife who goes on a journey to find a remedy for her husband, who fell sick after a row with a neighbour. Along the way, she endures strange encounters and unearthly experiences.

The film stars Season Chee, Pearlly Chua, Jojo Goh, Mei-Sim Hoon and Ling Tang among others, and had previously won the Best Film award at the Istanbul Film Awards in September.

When accepting the award together with the film's Singaporean director Ong Kuo Sin, Kuek thanked the cast and crew of Number 1 and his parents for giving birth to a "short but talented man", The Straits Times reported. The film stars Mark Lee as a retrenched man who decides to work as a drag queen to make ends meet.

Malaysian songwriters Keon Chia and Hooi Yuan Teng also had cause for celebration, as the song they wrote together with Singaporean Tan Boon Wah, Your Name Engraved Herein, won the Best Original Film Song award. It is the theme song for the movie of the same name, and is performed by Crowd Lu and the film's actor Edward Chen. Edmund Yeo's 'Malu' opening in Japan, but his films have never screened in Malaysia 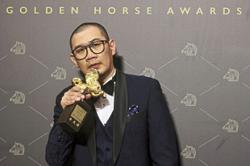