Is a return to show business on the cards for Hong Kong actress Jacqueline Wong?

The television serials that she had acted in were quickly canned after she was caught in a cheating scandal with married Hong Kong singer Andy Hui in April last year.

But it seems like the worst is over for Wong, 31, with one of these shows finally scheduled to be broadcast in Hong Kong.

The Offliners, which is centred on a heiress (Katy Kung) who starts a tech company, was shown in Malaysia last November, but has not been released in Hong Kong.

On Sunday (Oct 25), it was among the TV serials that broadcaster TVB unveiled for next year. Wong, who plays a supporting role in the serial, was even seen twice in the trailer for the show.

This comes after two other drama serials that Wong had acted in were belatedly released late last year: Finding Her Voice was put out of cold storage last October, while Handmaidens United was released last December.

Another serial, Forensic Heroes 4, was reshot to remove scenes that featured Wong. Her role was taken up instead by actress Roxanne Tong, who is now the girlfriend of her former boyfriend, actor Kenneth Ma. The TV serial was aired in February this year.

Asked for a comment by the media in Hong Kong, Wong said in a text message: "I am happy for the team. No other response. Thank you."

She did not reply when asked when she would be returning to the entertainment industry, and has not updated her Instagram account since July 22.

Meanwhile, her former boyfriend Ma seems to be the new darling of TVB. He will be starring in four TV serials next year, including Big White Duel 2, the sequel to the popular medical drama Big White Duel, as well as Children's Hospital.

The 46-year-old actor was crowned Best Actor for the first time at the TVB Anniversary Awards 2019 in January, after having been nominated 12 times at the awards. – The Straits Times/Asia News Network 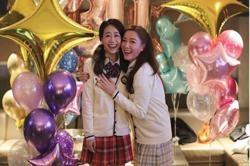