BTS has come under fire in China for a remark about the Korean War. Photo: Handout

Hit K-pop act BTS has come under fire in China for a remark about the Korean War, according to a Chinese news outlet.

BTS recently received the General James A. Van Fleet Award from the Korea Society, a US-based nonprofit organisation. The award, named after a US commander who fought in the Korean War (1950-1953), is given to South Korean and US nationals who have strengthened the ties between the two nations.

In a video clip released by the organisation on Wednesday, BTS member RM made an acceptance speech in which he said, “We will always remember the history of pain that our two nations share together and sacrifices of countless men and women.”

According to the Global Times, under the Chinese Communist Party’s People’s Daily newspaper, the speech enraged Chinese online users because it reflects a “one-sided attitude.”

Many Chinese deem the remark inconsiderate as China participated in the Korean War to assist North Korea and fought against South Korea and the United States.

After the speech went viral, the hashtag BTS ranked third place on the “Hot Search” chart at Weibo, a Chinese social media platform. Some users expressed their anger against BTS, warned of a boycott against the band and said they would quit the BTS ARMY, the band’s fan group. –The Korea Herald/Asia News Network 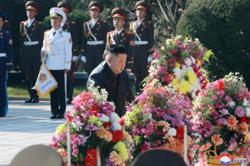