Lily Collins was drawn to 'Emily In Paris' because of the character’s resilience and determination which she found relatable. Photo: Handout

Darren Star gave the world a gift when, in 1998, he created the TV series Sex And The City, inspired by Candace Bushnell’s book. Over 20 years later, he does it again with Emily In Paris (available on Netflix). While many of us are stuck at home unable to fly anywhere, Star takes us to Paris, through the eyes of the earnest, adorably dorky and smart Emily Cooper, played by Lily Collins, who’s also a producer on the series.

Through our screens, we get to experience Paris: the beautiful sights, the mouthwatering food, the sexy people (oh, so many sexy people).

“We filmed the series entirely on location in Paris and the French countryside, with the idea of giving the audience a rich cinematic experience. And now more than ever, a much needed vicarious trip to France,” Star wrote in a letter to fans.

He describes Emily as “an ambitious Midwestern millennial who is handed an unexpected opportunity to work for a French marketing firm. Undaunted by her inability to speak French but buoyed by an American sense of enthusiasm, she runs headlong into a wall of Gallic indifference.”

Collins was drawn to the show because of Emily’s resilience and determination which she found relatable. “I’m also such a huge Darren Star fan, alongside women who are obsessed with the shows he has created.”

Get ready to fall in love, too, with Lucas Bravo (Gabriel) and Camille Razat (Camille).

“I had seen Lucas’ tape and thought he was great, and in person he’s just as charming and winsome. He blew us away. And when he read with Lily, we knew he was our Gabriel.”

With the cast and crew living and filming in Paris, plenty of their personal fish-out-of-water moments made it to the show.

Collins said: “I was encouraged to share some of my real experiences I was having living in Paris, and incorporate them into the lived experiences of Emily.”

She added: “We all had real-life anecdotes about living in Paris as Americans that made it into the show, and there are layers to those experiences – more obvious ones like language barriers – as well as more subtle cultural differences. But it takes living and breathing a different country to see all the nuances, and we all did that alongside Emily this season.”

There is so much to love about the show. It’s funny, it’s sexy and it’s so delicious to watch that for

10 episodes you’ll be able to forget that you were in the midst of a pandemic.

Lily Collins: For me, I’d been there quite a bit growing up because I grew up in England.

But then, as an adult, I would go for work but only for a few days here and there.

So to be able to be a resident of sorts for like four months, to live and breathe as a local and say that I’m getting to go to work in these places that I grew up going (be it) a museum or a ballet or, you know, a restaurant that is world renowned and you actually sit in it, and record a show, that changed my relationship with Paris.

I feel so lucky. Now it’s gonna be almost impossible to go back and not be reminiscing about what it was like to film there. I’ve created a new love affair with Paris.

Darren Star: You know, I was always a bit of a Francophile. I took French, when I was a kid, for a long time.

I finally went there when I was 19, sort of backpacking around Europe.

I just fell in love with the city and I would go back every year I could just to spend time there.

Eventually, I got an apartment for a number of months and took language classes and thinking about the show a number of years before I wrote it.

Thinking about what it would be like to have a character have the same kind of experiences and really kind of live there rather than visit. I’ve always been spending quite a bit of time there.

You’ve had the idea for this show for a while. Why was now the perfect time to do it and how did your idea evolve into this very current show?

DS: The idea I’ve had for a long time. By the time I wrote it, it was recently, I think social media really informed the story in a way.

It became part of what she does and also, I think, becomes a visual diary of her time in Paris.

I’ve done some Instagram stalking and, Lily, I saw on the day you wrapped you got so emotional.

What was it that was special about this cast and crew? You just see so much love there.

DS: It really was a very special experience in that everybody from the States were all living and working together in Paris, and the French crew were so committed, warm and wanted to really show us their love for that city.

It really did feel like a family member. There was just very special unique chemistry between all of us.

I think that the cast really hung out together, they were friends, and I think that sort of camaraderie and chemistry just translated into the show.

How do you think Carrie Bradshaw would feel about Emily? Would they be friends?

DS: Yes, I think she would love her and admire her completely and sort of be a little jealous of the experience she’s having in Paris. – Philippine Daily Inquirer/Asia News Network

Method acting? Nah! It's all instinctual for Millie Bobby Brown 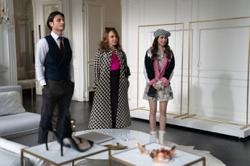