Sometime back, Iman Corinne Adrienne had an injury while working on a film which forced her to be out of action for a few days.

“I had to put up with just sitting down – for three whole days! – which was a bit of a torture for me,” says Iman, who made her acting debut 20 years ago in the award-winning film Spinning Gasing.

“And it wasn’t even an injury doing an action sequence or anything, just me slipping while turning to say hi to someone because my body was tired.”

Her lack of enthusiasm for staying still is obvious in how the 42-year-old has expanded her resume from acting – be it on stage, on film and in TV series which includes leading roles in Singaporean productions Heartlanders and The Singapore Short Story Project – to producing and directing duties as well.

Hello! My 1st trip out of KL post #mco Cantikkan tempat ni? Maybe this is what I needed? Tq Abg Ken @nazrinkeane What camera is this? Nampak macam painting. #langkawi #getaway

A post shared by Iman Corinne Adrienne (@imancorinneadrienne) on Aug 26,2020 at 9:05pm PDT

In the past two decades, she’s done hosting jobs for live events and TV shows, and modelling gigs.

“I love stories, ” the Malaysian tells StarLifestyle. “So, for me, it doesn’t matter whether you’re going to be in front of the camera or behind the scenes, because there is a level of storytelling in all the them.”

As if to prove her point, her list of projects are three pages long and, in a font size that is really tiny too! (From left) Iman Corrine Adrienne, Rosyam Nor and Avaa Vanja star in Mamat Khalid's noir film 'Kala Malam Bulan Mengambang'. Photo: FilepicAlthough Iman has taken a number of breaks over the years – the longest was when she got married and then another time when she became a mum in 2009 – Iman is adept at juggling more than one task at a time.

The Kuala Lumpur native remembers years ago when she was 29, she went straight from an all-night shoot on Mamat Khalid’s film Kala Malam Bulan Mengambang (where she played a cabaret dancer) straight to the set of the show she was producing to check if everything was OK, and only then did she go home to sleep.

“I was trying to see if I pushed myself, could I do it all?” recalls Iman. Unfortunately, she isn’t invincible all the time.

“I was coughing for a whole one minute on stage while doing a play. I was sick because I had pushed myself too hard, ” she says of one incident.

With the habit of juggling so many things at one time, it is no wonder the go-getter found it to be a challenging period when Malaysia was put under the movement control order (MCO).

She shares: “Considering I am usually quite an outdoorsy nature type of a person, there were times when I felt a little claustrophobic. There were also those moments when I worried about what the future holds, what is going to happen to all of us?

As it turned out, one of her worries became a reality when she lost an investor as the production couldn’t take place. “But I have learned that unavoidable things just happen. Something I have learned even more after becoming a parent.”

The 1.73m-tall Iman adds: “What kept me occupied and sane (during MCO) was my son and my animals. The fact that both my ‘furries’ are rescued animals, that alone made me think that a new beginning or second chances are possible.”

In person, Iman – who stays active by doing yoga, martial arts and gym training – is full of energy, friendly and quite a storyteller.

During this interview, she recounts the ups and downs of her career – from her humble beginning as an actress to expanding her repertoire in Singapore as well as the formation of the media company Serpentiga Film with business partner Damon Chua. One of the ways Iman relaxes her mind is by meditating.Iman says she is solution-oriented rather than someone who dwells on problems. She credits this personality trait to the fact that she is self-made person in the industry with no backing of an influential person or company.

While Iman mentions she’d rather refrain from airing her thoughts on politics and religion in public – she’s raised a Catholic who converted to Islam in 2008 – she is willing to talk about her life as long as it is contained within her designations as an actor, producer and director.

During our conversation, she holds back only when asked about her racial breakdown – wanting only to be known as a Malaysian.

“One has to be very responsible with what one says as everything could be taken out of context these days, ” she reasons.

However, with that outgoing personality of hers, she can’t help but share a number of personal things and thoughts on her Instagram account (@imancorinneadrienne) from time to time.

For example, in December she posted about her mum suffering a stroke, and later diagnosed with the Alzheimer’s.

What happened to her mum, as well as work challenges thrown her way, have helped Iman realise some things, she says.

“Sometimes the measure of a person is tested and it’s tested best during times of hardship... I think having self-awareness helps a lot in personal growth, to be a better version of oneself.” 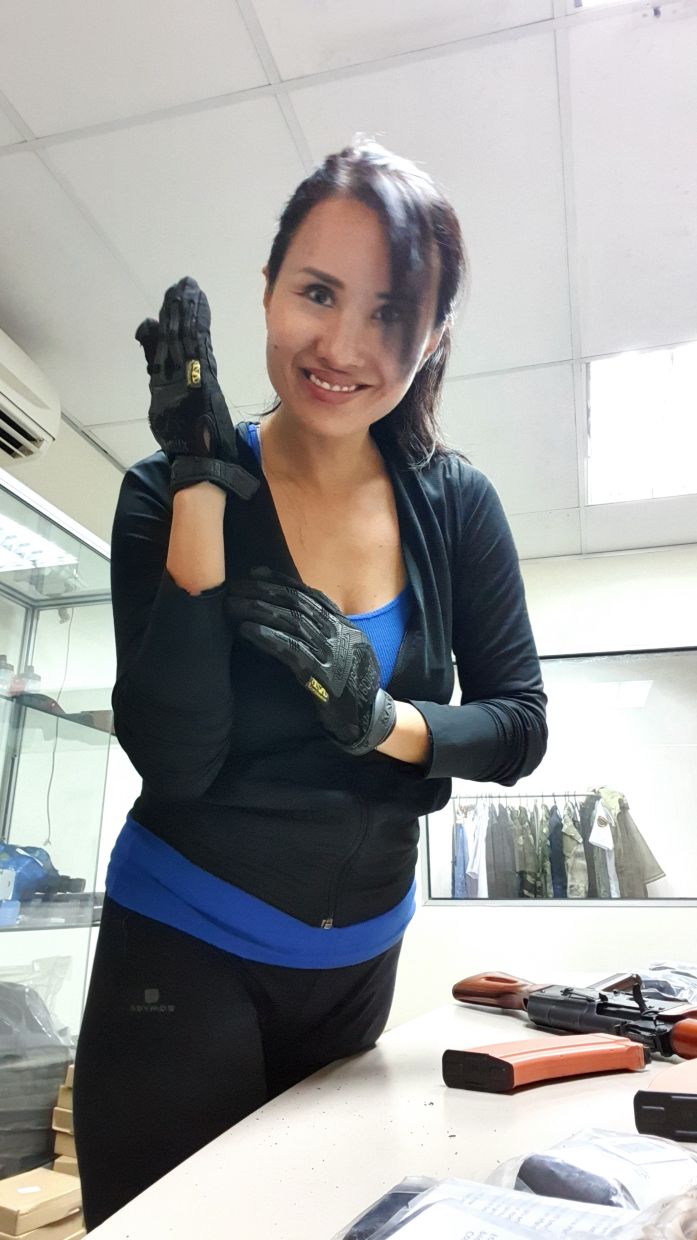 For her role in 'Polis Evo 3', the actress had to undergo gun training.Perhaps that is one of the reasons why she is happy talk about her age in an industry where youth is favoured.

“It may be a bad thing to talk about age in this industry because people tend to put you in a box – like if you are in your 40s or 50s, you can only play certain roles. But I just feel that it will do myself and other women a disservice if I were to lie about my age, ” she says.

Proving that age is just a number, Iman makes a return to the silver screen as an actress with two upcoming projects – an action film centred on the Royal Malaysian Air Force (TUDM) directed by Zulkarnain Azhar, and the third movie in the Polis Evo franchise, Polis Evo 3, for which she had to go for gun training.

Both films were originally planned for release this year but have been postponed indefinitely due to the pandemic.

Although she jokes that thanks to MCO, she has finally managed to catch up on her sleep, Iman says the pandemic was also a time for self-reflection.

“I remember as a child, my late granddad – who was instrumental in encouraging me to become a storyteller – used to tell me how he had to do whatever it took to ensure that his children survived the war.

“He used to say that, at the end of the day, when it comes to war, no matter how rich or poor one is, everyone has to do whatever it takes to keep going.

“(For him) life is not just about the end goals. It’s about the process.

“Because when push comes to shove, those little moments are the ones we will cherish in the long run. I go by that too.”