Simon Cowell speaks out after surgery from bike accident, thanks medical staff

America's Got Talent creator and music industry mogul Simon Cowell has thanked the medical staff at the Los Angeles facility he is being treated at after breaking his back falling off a new bicycle on Saturday.

"Some good advice ... If you buy an electric trail bike, read the manual before you ride it for the first time. I have broken part of my back. Thank you to everyone for your kind messages," Cowell tweeted on Sunday, adding,"And a massive thank you to all the nurses and doctors. Some of the nicest people I have ever met. Stay safe everyone."

Cowell had the accident while testing the bike at his home in Malibu, California. He was later hospitalised, and underwent a five-hour surgery on his back.

"Simon had a fall from his bike on Saturday afternoon whilst testing his new electric bike in the courtyard at his house in Malibu with his family," a spokesperson told Variety on Sunday. "He hurt his back and was taken to hospital. He's doing fine, he's under observation and is in the best possible hands."

Cowell will miss the first two live shows of America's Got Talent on Aug 11 and 12.

Kelly Clarkson will temporarily take over for Cowell on the judging panel.

"My friend, Simon Cowell, is doing better now but was in an accident and won't be able to make Tuesday and Wednesday's live shows for 'AGT,' but no worries America, someone far wiser, cooler, and hotter is taking his seat!" Clarkson joked in a statement. "The unbelievably amazing Kelly Clarkson. You're welcome in advance!" - Reuters 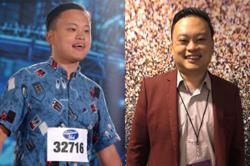