Why did Mnet blur out the face of Lay Zhang, who is still a member of EXO? Two hashtags calling for Mnet to apologise to Lay are now trending worldwide on Twitter.

A recent editing choice by Mnet has EXO fans infuriated.

EXO is a K-pop boy band made up of three sub-units: EXO-K, who operate primarily in Korea, EXO-M, who promote in China and EXO-L – in which the L stands for “Love” – representing a global link between the former two units.

EXO-M has since become inactive as three members of the sub-unit, Kris, Luhan and Tao, have left the group.

On the latest episode of their variety show, TMI News, Mnet featured a clip of EXO’s legendary track, Growl. The faces of the three former members were blurred out in the clip.

Puzzlingly enough, the channel also chose to blur out the face of Lay Zhang, who is still an active member of EXO.

This has caused an outcry from fans, who are demanding that the agency apologise to Lay. Netizens took to Twitter to express their anger, trending the hashtags "#Lay_Is_EXO" and "#MNETApologizeToYixing" (Yixing is Lay’s Chinese name).

Some fans are also of the opinion that Mnet was disrespectful for blurring out the faces of former members, as they had still contributed to the group in the past.

Mnet has yet to provide an official response.

I can't believe why Mnet blurred out kris, luhan, tao and yixing face! They haven't changed, they can never appreciate exo#lay_is_exo#MNETApologizeToYixing pic.twitter.com/5GMGQ4SmI5

EXO's Chen now a father to a baby girl 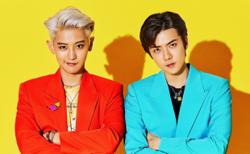