Last week, TVB actors Jackson Lai and Ashley Chu became the latest in a slew of celebrities to be caught in a cheating scandal.

The pair, who plays a couple in the upcoming drama Zombie, was caught driving to a remote location and sharing cake. According to Oriental Daily, Lai claimed that he and Chu were just on their way to work, despite the filming of Zombie having completed two weeks prior.

Both Lai and Chu are in committed relationships. Lai is married to his childhood sweetheart, who is said to be eight months pregnant, whereas Chu is dating fellow TVB actor Brian Tse.

In response to the allegations, TVB Entertainment called for a press conference on April 29, where Chu formally apologised to all involved. According to Chu, she was unable to separate herself from her character’s (in Zombie) feelings towards Lai.

Chu’s boyfriend, Tse, also gave a statement: “I think I have to take some responsibility because I’m always busy with work and neglected Ashley. She is a wonderful and hardworking person; I hope everyone gives her a chance to reflect on her actions.”

However, fellow celebrities were not so kind.

In a scathing Facebook post, actor Wong He said: “Can’t get out of character? Hah! If your character likes to eat s**t, wouldn’t your mother save a lot of money on food? Your company has so many experienced actors and veterans, all who have set good examples, yet you still haven’t shown any improvement.”

Actor Flow Leung, who was Lai’s co-star in TVB’s Airport Strikers, also had some harsh words for the couple. In an Instagram post, Leung said Lai is “pretending to be a good man” who “resorted to cheating” even when his wife is pregnant with his child.

Lai was not present at the press conference. However, the actor was spotted in public with his wife on April 30. He told reporters that he was no longer in contact with Chu. In response to questions about how the scandal has affected his relationship with his wife, Lai admitted that it will not be possible to “pretend as though nothing has happened”.

He added that he will work to regain his wife’s trust. Lai and Chu’s contracts with TVB have been suspended for the time being. 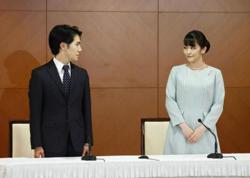