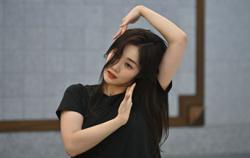 Late K-pop idol Sulli's pet cat Goblin - a hairless Sphynx cat - is now in the care of actress Kim Sun-ah, who is also known as Nam Kyung (Can Love Be Refunded, 2019).

The 25-year-old, who was a friend of Sulli's, posted photographs of Goblin on Instagram last Friday.

According to K-pop news site Soompi, she wrote in Korean: "I don't know how to say this... I didn't have the confidence to take care of Goblin right away. It broke my heart to see him. I asked the really busy Heechul oppa (Korean for big brother) if he could take care of him and he did not hesitate. He took him immediately and even gave him a health check-up.

"I'm really grateful to him. He's such an amazing person. It's been a while since I took him home, but he's too lovable and adorable for just me to see, so let us all look at him. I love you, Goblin."

Sulli, a former member of girl group f(x), died last October in what is widely believed to be a suicide. The 25-year-old singer, whose real name was Choi Jin-ri, had been the target of cyber bullies and had previously shared about her mental-health struggles. Her cat Goblin frequently appeared in her Instagram posts and stories.

Boy band Super Junior's Heechul, Sulli's senior at K-pop label SM Entertainment, temporarily took Goblin in after her death. He showed the cat with him in a YouTube live broadcast last December.

Back then, Heechul said he kept crying every time he looked at Goblin, but that the cat came up to him every time he cried, pointing his butt to Heechul's nose and making him laugh. – The Straits Times/Asia News Network