Why British TV detectives are superior to their US counterparts 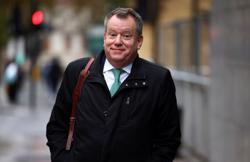 Brainy, bloodless detective shows like 'Sherlock' (left) and 'Vera' are thriving in Britain, where viewers can enjoy a jolly good whodunit.

If super-sleuth Jessica Fletcher decides to come out of retirement, she’ll have to brace herself for stomach-turning crime scenes. Or move to Britain.

Brainy, bloodless detective shows like Murder, She Wrote may be dead on network TV in the United States, but they’re thriving in Britain, where viewers can enjoy a jolly good whodunit.

“I think it’s quite nice to escape what’s going on, to be able to sit down and go, ‘Here’s a beginning, middle and end of a wonderful story with a mystery to it, set in a beautiful landscape’, ” said Kate Bartlett, executive producer for Vera, the long-running series in which Brenda Blethyn’s character relies on many of the same quirks and insight once applied by Lt. Columbo.

Americans craving the “darkness” have a rogues’ gallery of homegrown options to choose from.

Recent episodes of Criminal Minds, which wrapped up its 15-season last month, have focused on FBI agents chasing a serial killer who wears the skin of his victims.

The lead character in Hannibal once made an antagonist eat his own nose. In Interrogation, viewers are introduced over and over again to a victim with two knives in the back, a cord around her neck and her head bashed in.

“The true story that we did research on contained a certain amount of violence and a certain amount of sex that we had to portray to be able to stick to the truth, ” said Interrogation co-creator Anders Weidemann during the Television Critics Association press tour. “If your idea demands violence or sex, you should do it. But if it’s just used as a speculative way to create tension, then don’t.”

But a plethora of new viewing options in the US proves that you can create tension without making viewers feel like they just stumbled into the Spanish Inquisition.

The Hallmark Movies & Mysteries channel has been one of cable’s fastest-growing networks since its debut six years ago, thanks to titles like Crossword Mysteries: A Puzzle to Die For and Murder, She Baked: A Chocolate Chip Cookie Mystery.

Older viewers are more inclined to treat their TV choices as inspirations for their next vacations, which explains why so many of the murders take place in picturesque landscapes.

Those backgrounds are particularly inviting for fans in London and Manchester, where the sun makes fewer public appearances than Queen Elizabeth.

That’s a sharp contrast to American procedurals, which are almost always set in urban cities.

“You’re sitting in your home in the UK, it’s winter, and the biggest thing on TV is this thing called Death In Paradise, which is set in the Caribbean, ” said veteran actor Adrian Dunbar, whose credits include Blood and Line Of Duty.

“The reason we’re all watching is the sunshine and the beaches. Everybody wants to watch good weather.”

Perhaps the biggest difference between American and British series is how much – or how little – we get to know our protagonists.

The Law & Order and CSI franchises pride themselves on how little they reveal about their central characters’ private lives, while the personalities of the Britain’s most storied detectives – Sherlock Holmes, Inspector Morse, Jane Tennison – are often more intriguing than the cases they’re tackling.

“These are normal people in exceptionally difficult circumstances, and that’s what drives the narrative of each episode, ” said executive producer Phil Hunter in reference to the appeal of his series Vera.“We’re invested, because Vera could be your neighbour.

“That sort of authenticity of character means we can hold the viewer’s attention without the violence.” – Neal Justin/Star Tribune (Minneapolis)/Tribune News Service

'Picard never left me': Patrick Stewart on returning to his most iconic role