The significance of the reunion dinner is also the highlight of A Moment Of Happiness, the Malaysian-Thai Chinese New Year flick that she is headlining this year.

Lim, 29, shared that it is a must for everyone in her family to head home and join the celebration.

“Our family definitely cares a great deal about Chinese New Year. So, all our family members have to be there, without exception, ” she said.

And, when asked what she likes best about the celebration, she recalled all her happiest memories were the ones shared with her closest family members.

“I do enjoy having those yummy snacks and Chinese New Year’s cookies, cooking with my mum, wearing cheongsam with my sister, and playing mahjong with all of my family members. “I feel really happy to be together with them, so I will never, ever change this family tradition during Chinese New Year, because it symbolises the true meaning of ‘reunion’ for me.

“Moreover, I have always enjoyed lighting up sparklers and firecrackers during Chinese New Year ever since I was a child, especially when I’m playing with my two little brothers.”

Lim said she will uphold these traditions even though she has become an artiste now.

“Because, it is not about what you eat, but who you spend it with, ” said the actress-singer who made her big-screen debut in Hong Kong horror rom-com Vampire Cleanup Department in 2017. In A Moment Of Happiness, Lim (second from left) stars with Chan Fong (left) as her father, Danny One as her uncle and Thian Siew Kim (right) as her bestie.

In A Moment Of Happiness, Lim portrays a young woman named Zhen Zhen who is an Internet sensation, much like herself. The resourceful girl indulges her followers by positioning herself as a “princess”, with the help of her bestie Zitomira (Thian Siew Kim), uncle (988’s Danny One), and father (988’s Chan Fong).

As a contemporary take on the Cinderella fairy tale, Zhen Zhen the fake princess meets a Thai backpacker named Nat (Tul Pakorn), who is actually a member of Thai royalty travelling incognito.

The movie calls for Lim to have many changes of outfits and to portray different images, as the character she plays is a Key Opinion Leader (KOL) who needs to create as much fresh content as possible for social media.

“This is one film where I have experienced the largest number of outfits and image changes in my life. Since Zhen Zhen is a KOL, she needs to maintain her popularity by generating innovative and original content, in order to keep her social media feed fresh for her followers. That is the reason why she needs such a variety of outfits, to be more captivating and stand out in the crowd.

“Even though it was rather time-consuming and tiring for me to change in and out of so many outfits within a day during the shoot, I must add that I did enjoy the process of being someone that I couldn’t be in real life. So it was indeed a wonderful experience for me.” However, that is not the toughest part of the shoot. According to Lim, it is the way Zhen Zhen holds objects that posed to be an issue.

“Zhen Zhen has this unusual habit where she uses her toes to hold objects like bags of snacks. I felt it was funny when I first heard it from the director.

“So, I desperately wanted to try and practise before the shoot. But I soon realised that it is really hard to do that, especially when you want to make the action or movement look natural.

“Hence, this is one of the shots that required the most retakes. I figured out, while shooting that scene, that the angle and the position between my toes are the key elements to a successful take.” 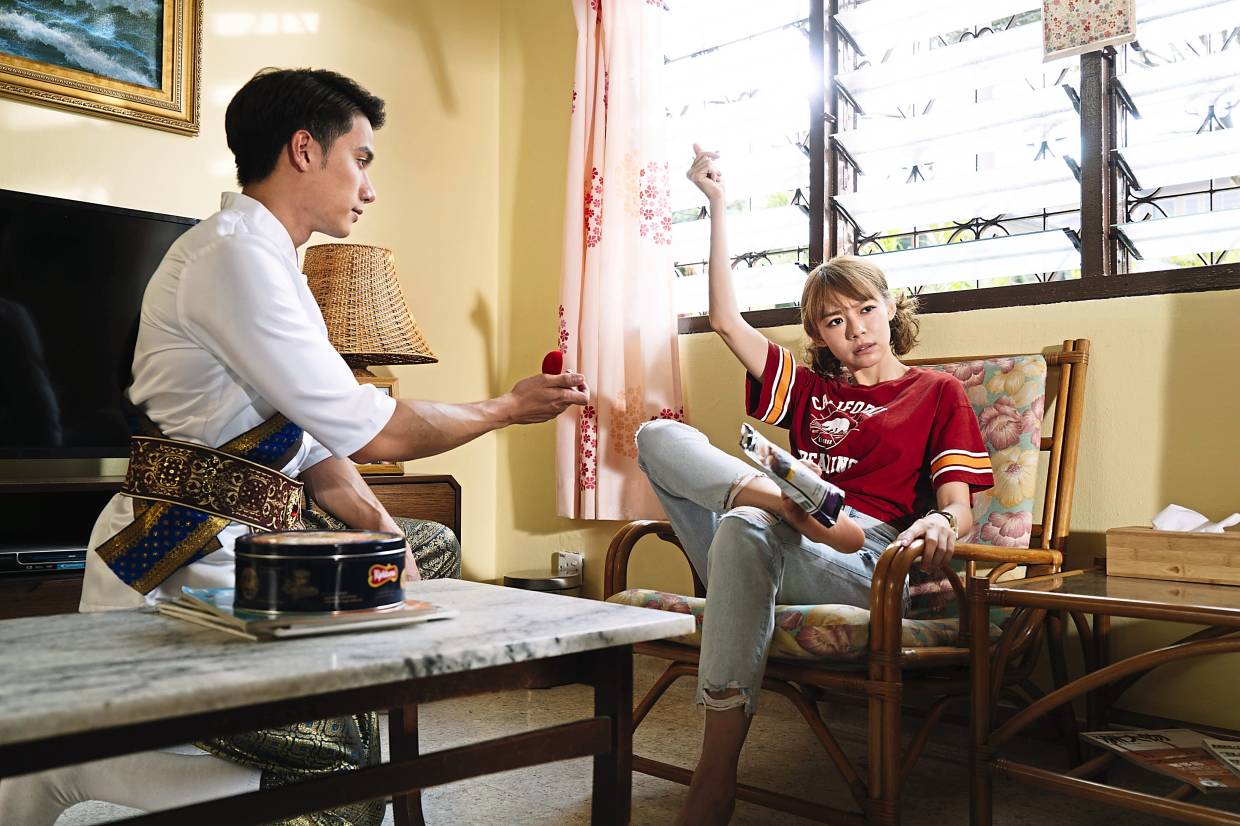 One of the hardest scenes to shoot for Lim is gripping a bag of snacks with her toes. In this scene is Lim's Thai co-star Tul Pakorn. Photo: Handout

Another memorable scene, according to Lim, is where she has to dance with her Thai co-stars Tul, Happy Polla and Gaston. After days of practising the dance moves, the cast was raring to go.

“But on the day we were supposed to complete this dancing scene, the shooting progress was a bit delayed and this scene was scheduled to be shot around 3am, so everyone was tired after a long day of shooting but we still tried our best to perform, ” Lim said.

Apart from Thai actors, Lim also had the chance to work with Hong Kong stars such as Mimi Chu, Susan Shaw and Richard Ng as well as Malaysian deejays such as Danny One and Chan Fong.

“The greatest reward for me in being a part of this movie was getting the opportunity to make lots of friends from around the world. All of us are united like a family even though we are from different backgrounds, of different ages and languages.

“We used to have our dinner together after work, and they took good care of me throughout the shoot, so I am really thankful and appreciative.”

Produced by Sunstrong Entertainment, Lomo Pictures and MM2 Entertainment, in association with 988 radio station, A Moment Of Happiness is helmed by director Tai Min Hwee (brother of singer-songwriter Penny Tai), who is known for comedies like Mo-Kiss-U, White Ants, Wonder Of Little Fatty, Orphan Wonderland and Lost In The Jungle.

A Moment Of Happiness opens on the first day of Chinese New Year.

Gallery: A Moment Of Happiness In one of the scenes, Lim had to dress in traditional Chinese costume to portray Xiaolongnu.

In A Moment Of Happiness, Lim (second from left) stars as an internet sensation with Chan Fong (left) as her father, Danny One as her uncle and Thian Siew Kim (right) as her bestie.

One of the hardest scenes to shoot for Lim is gripping a bag of snacks with her toes. In this scene is Lim's Thai co-star Tul Pakorn.