‘Wait, I see someone up ahead. Oh, it’s just Ed Harris, warning us away from the abyss.’

Ah, the early weeks of the new year. ‘Tis the season for unheralded science fiction/horror thrillers and our selection for 2020 is Underwater, an Alien-Abyss hybrid that is surprisingly less cynical and more effective than most jaded moviegoers would expect.

Memories of 1989 bubble to the surface: a landmark year for undersea epics with The Abyss leading a pack that included DeepStar Six and Leviathan.

Three decades and various other entries along, is there still room in our hearts for undersea survival epics? Or does Underwater serve merely as an unintended appetiser/teaser for the upcoming Avatar 2, also said to take place largely beneath the waves of Pandora?

After sitting on the shelf for some time – circa Disney’s acquisition of its production studio, Fox – Underwater may have better served the genre by being retooled as a “back door” introduction to Marvel’s Namor, the Sub-Mariner.

But something like that would happen only in a comic-book geek’s most fevered dreams (don’t judge me too harshly). ‘We’ll cut off every bulkhead and vent until we have it cornered, and then we’ll blow it the $@#&! out into space. Sorry, I don’t know why I said that.’

No superheroes will be found here, although there are heroic moments, along with a well-established sense of claustrophobia and some sphincter-clenchingly suspenseful moments.

The premise: a big corporation has established a massive drilling platform on the ocean floor and the drill goes into places it shouldn’t.

The resulting catastrophe leaves six desperate crewmembers – led by a stubbly Vincent Cassel and a buzzcut-sporting Kristen Stewart – struggling to make it to the surface while being hunted by some kind of undersea creature.

Actually, I should stop right there because any further discussion of the shallow story would take us into the crushing depths of spoiler territory.

Then again, it would not be much of a spoiler to talk about dwindling numbers and mounting odds – because we expect all that from any halfway decent SF/horror thriller.

On those fronts, Underwater does hold a couple of (mild) surprises till rather late into its running time. Just try not to look at the posters.

And, derivative as the film’s premise may be, director William Eubank – who earned praise in genre circles for his 2014 indie SF mystery The Signal – milks it for maximum atmosphere and tension.

The ocean-floor setting, not exactly the brightest spot on Earth, leads to many murky, shadowy scenes but (much like Ridley Scott’s 1978 Alien which inspired a lot of this film’s look and feel) Eubank utilises the gloom well to heighten the terror and jolt the viewer.

Underwater is also clearly Stewart’s film, the game efforts of supporting performers like Cassel, Henwick and T.J. Miller aside. She is up to both the physical and emotional demands of the role, giving us a tough and resourceful main character haunted by past tragedy (not dwelled upon too much, thankfully) and who, somehow, manages to evoke an almost beatific calm in the most critical of moments.

As spiritual descendants of Sigourney Weaver’s Ripley go, Stewart’s Norah Price may not be as memorable as the original, but she’s certainly more appealing than the cloned version.

And, as movies inspired by classics go, Underwater is not a bad effort. Just that character explorations and dynamics are not sufficiently in-depth (OK, that one’s on me) to provide for any solid drama, and the familiarity of the premise and creature design constantly remind us that we’ve heard this fish story before. 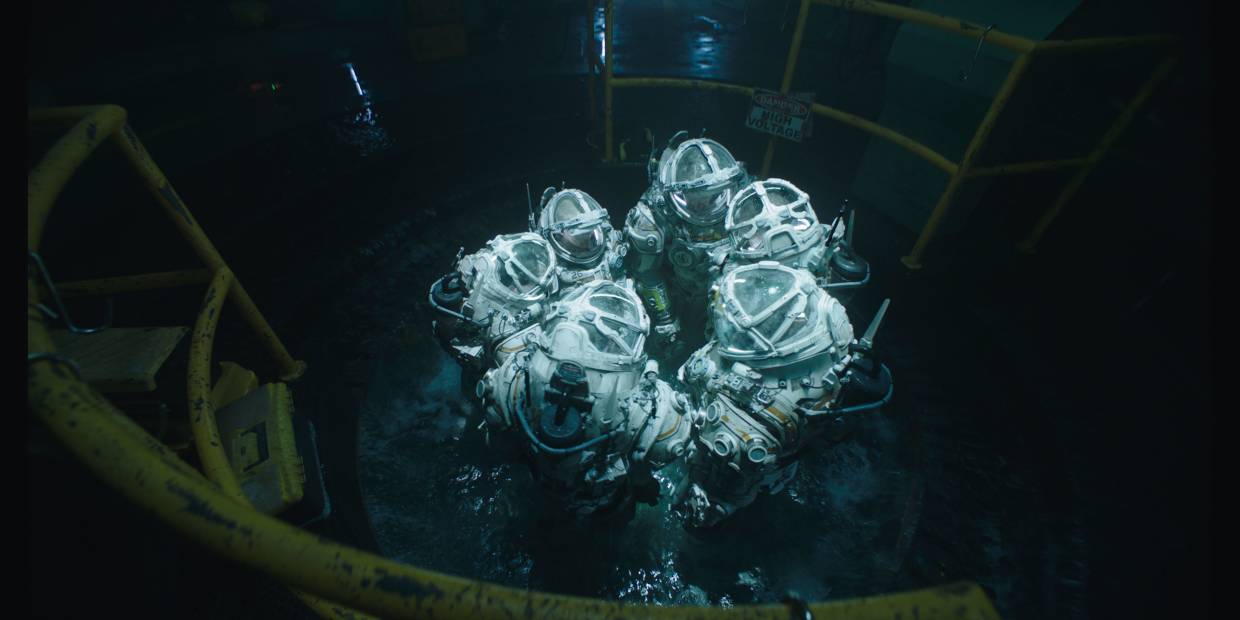 ‘Right, we’re going to have to bring back the life form. Priority One. All other priorities rescinded … dammit! Who’s the joker who keeps pasting lines from Alien in the shooting script?’

Voyage at the bottom of the sea