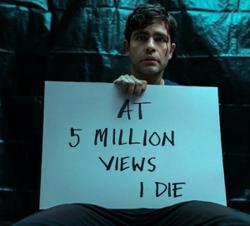 “I can't believe even the man from the burger shop I went to the other day recognised me,” says Santesh, astonished.

The 31-year-old singer is telling StarLifestyle about his newfound fame after the release of his debut Malay-language single, Amalina, last year.

The song was such a big hit, he earned a place in the Malaysia Book Of Records when its music video drew one million YouTube views within just three days. A year later, the number has swelled to a staggering 30 million.

“My first impression was that it’s one of the most beautiful songs I’ve ever heard. It was also very challenging to sing, there’re a lot of high notes,” he recalls listening to the Harry Khalifah-composed hit for the first time.

“The melody is really strong. I knew it would be a hit.”

While Amalina marks Santesh’s first foray into the Malay-language market, he has been pursuing music for almost all his life.

“I first started singing when I was six. My father had a band and I would follow him around, singing at weddings and birthday parties.”

At 15, Santesh began chasing his music dreams seriously, forming a band with a group of friends.

Between 2003 and 2010, he performed at private parties and corporate shows and went on to release five albums.

“I had no way of promoting them and I didn’t have a platform back then. Although the albums didn’t do well, I learned a lot about recording and post-production,” he says.

Santesh first captured the attention of a wider audience when he joined singing competition Vaanavil Superstar in 2011 and made it all the way to the grand finals.

He went on to compete in the show’s all-star edition the following year but didn’t continue on due to his father’s passing.

From then on, Santesh has been gradually making his mark in the local Tamil music industry.

After finding his footing in the Tamil music scene, Santesh decided to branch out into the Malay-language market.

“I’ve always been interested in singing Malay-language songs but I never found the right time until last year. I started covering a lot of Malay songs and posted them on social media.

“Harry Khalifah saw one of my covers and reached out to me to do Amalina,” he says.

Currently, the singer is a contestant on Big Stage, a singing competition that gives viral sensations like him a chance to take their careers to the next level.

Three weeks in, Santesh has been wowing judges and audiences at home with his performances.

His rendition of irama Malaysia hit Balqis even impressed Datuk Seri Siti Nurhaliza, the song’s original singer who is also a judge on the show.

Santesh has consistently placed among the top three highest-scoring contenders on Big Stage so far.

He believes Big Stage isn’t about outperforming another but supporting each other.

“The contestants are like family to me. If they don’t know something, I will teach them. I will share my experience with them and encourage them.

“I don’t see this competition as me vs them. It’s about testing my own capabilities,” he says.