Oh boy! BoBoiBoy is back with another movie this August

While most animation studio takes close to four years to complete a film, Animonsta Studios pushed itself to finish BoBoiBoy Movie 2 in just 12 months with a budget of RM7mil.

What more, BoBoiBoy Movie 2 will be released simultaneously in five countries on Aug 8 - in Malaysia, Indonesia, Singapore, Brunei and Vietnam.

To achieve this almost impossible deadline, the studio stopped production of its popular BoBoiBoy TV series to work around a clock on the film, and by investing in a new software that does rendering at a much faster rate.

At an event recently where Animonsta showcased the movie's poster, trailer and theme song, the studio's CEO Nizam Abd Razak explained: "We did face a lot of challenges making this movie in 12 months.

"But our aim is to produce more films in the near future. Ideally, we want to come out with a new film every one year or every one-and-a-half year. The first BoBoiBoy movie came out in 2016, and it's only three years later that we have the second film.

"That is why we enforced the 12-month deadline to see if we could produce a film without jeopardising the storyline or the quality of the animation. If the audiences' reaction is positive towards this film, we want to keep on producing more films consistently."

BoBoiBoy made its debut as a TV series in 2011. It basically revolves around a schoolboy who gains superpowers and teams up with his friends to protect the earth from alien threats. After three seasons, it continued as a new show titled BoBoiBoy Galaxy in 2016 which ended its run in the middle of last year.

The character ventured into the silver screen in March 2016 with BoBoiBoy: The Movie, which became the then highest-grossing local animated movie, with a box office collection of RM18mil. (This year's Upin & Ipin: Keris Siamang Tunggal took over the title with a gross of RM26mil.)

"We are hoping to earn more at the box office with BoBoiBoy Movie 2. It's too soon to say how much it would earn right now but we have faith in our product," said Nizam, who is also the film's writer, director and co-producer.

He added: "The first film was shown in South Korea, besides Brunei, Singapore and Indonesia. For this second film, we are looking at releasing in more than the five countries we've mentioned. For example, India and Kazakhstan have shown interests in the product - they're familiar with this character from watching the TV show on Disney Asia.

BoBoiBoy Movie 2 sees the titular character and friends getting a visit from an alien named Retak'ka, the previous owner of the Elemental Power which BoBoiBoy now has.

Retak'ka demands for the power back from our young hero so he could achieve his dream of conquering the galaxy. BoBoiBoy, along with his friends, must figure out a way to stop this megalomaniac and save the galaxy.

"There are a couple of new characters in the movie. However the biggest one is Retak'ka, the villain," shared Nizam.

"Fans can expect exciting visuals and plenty of action sequences. We've enhanced the animation quality with this new software, which allowed us to not only work on the product faster but animate moving water, moving trees and even add movements to hair. In the first film, we didn't have any of this."

Nizam continued: "The core of the story is on the friendship among the main characters and development of these beloved characters. We made the story in a way that those who have not watched the series or seen the first film, would still be able to watch it because it's meant for the whole family.

Singer Faizal Tahir says he is honoured to be singing the theme song for the film. Photo: The Star/Shaari Chemat

Even though Faizal didn't get to watch the whole film before writing the song, the singer got the gist of the story through some clips to compose a rocking number that carries the positive message of never giving up.

"It's a great honour to be part of the BoBoiBoy universe," said Faizal. "My children, like lots of Malaysian children, are familiar with this character and love it. I am truly humbled to be singing the theme song."

Nizam reasoned why he chose Faizal in the first place: "If a fan started watching the series in 2011, the then 12-year-old would now be 21 years old. That is why we needed a singer with a positive image who has a wide fanbase."

As to why he created BoBoiBoy, Nizam said: "I grew up watching foreign superheroes on TV. I want my children to grow up with a Malaysian superhero, I want BoBoiBoy to be a voice and a role model for the younger generation."

If the film proves to be successful, Nizam plans to come up with projects featuring different characters within the BoBoiBoy universe.

Oh boy! BoBoiBoy is back with another movie this August 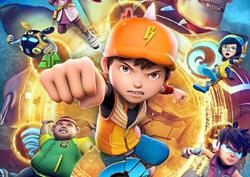