When Korean-American comedian Helen Hong was starting out on her career, there was one comedy club in New York City that absolutely refused to book her. The club owner told her she wouldn’t need to send in her availability because, according to him, “ I don’t think women are funny, and I don’t think Asians are funny.”

Well, Hong certainly has the last laugh now. According to her, that comedy club no longer exists. And Hong has gone on to higher things: she’s guest-starred on shows like Pretty Little Liars, New Girl, and Parks And Recreation, and performed her stand-up on The Arsenio Hall Show, Last Call With Carson Daly, Comics Unleashed, and TV Guide Network’s Standup In Stilettos, among others.

“There is definitely a lingering idea amongst a lot of old-school people that women aren’t funny. It’s probably a generational thing. Thankfully, however, the younger generation doesn’t have that any more, because of female comedians like Amy Schumer and Ali Wong, who are just killing it,” Hong said.

Hong was in Kuala Lumpur recently as part of the third season of Comedy Central’s Stand Up Asia!, which features 15 of the most distinct voices in comedy from around the world.

According to Korean-American comedian Esther Ku, comedy was a mostly male-dominated industry. However, this could work to a female comedian’s advantage.

“I grew up with three brothers, so for me, the transition was very natural,” said Ku, a member of the all-female sketch show Sorry Not Sorry, who has appeared on NBC’s Last Comic Standing, MTV’s Girl Code, Nick Cannon’s Wild ’n Out, and The Jack & Triumph Show.

“I know there are relatively few female comedians out there, if you consider the percentages. But I never wanted to be a whiner about it, because then your mind would believe it was hard. So I tell myself, it’s easy. We stand out! And when female comedians make it, they make it huge.”

Ku’s statement certainly has merit: female comedians have long been a mainstay on popular entertainment, from classic comics like Joan Rivers, Phyllis Diller and Lily Tomlin, to newer faces like Mindy Kaling, Tina Fey, Gina Yashere, Kate McKinnon and Chelsea Handler. On the Asian front, people like Margaret Cho and Ali Wong have blazed the path.

This situation is even true in Malaysia.

“In the last few years, I’ve seen a growing trend of females getting out there and trying open mikes. And I think we’re halfway there. In the last couple of years, for example, we’ve had people like Hannan Azlan and Shamaine Othman, girls who did comedy, and did it well,” said Malaysian comedian Joanne Kam, who has been seen in shows like Kam ... In Your Face, Kings And Queens Of Comedy Asia 2, Super Kam & The League Of Extraordinary Femmes, and more.

“Right now, there are young girls going out, taking the helm of com-edy. I think that in a few years, we can stand with the rest of the world. Ten years ago, you probably wouldn’t have female open-mikers. But now, you have girls going up and talking about everything – it’s very encouraging!”

One issue about being a female in a male-dominated industry, however, has been the issue of sexual harassment. Due to the nature of stand-up comedy, which was often casual and held in venues like clubs and bars, it was easy for some men to take advan-tage of female comedians. In this modern age of #MeToo however, it has become easier to speak up about it.

Singaporean comedian Chia, however, stressed that one should not dismiss all men.

“It’s usually a small minority of men who are like this. Most men I’ve encountered have been great,” said Chia, who received the 2017 Rising Star Award, for Comedy, at the Asian American Television and Film Festival.

“Men have helped me in my career. A lot of bookers, people at comedy clubs, are male. Once, there was an audience member at one show, who was a bit creepy to me. And the male comedians came up and helped me. So I think it’s important to make men your allies.”

The third season of Comedy Central’s Stand Up Asia! will premiere on Comedy Central Asia tomorrow at 10pm. It will run every Tuesday for 10 episodes. 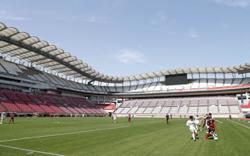 Empty Japan stadiums could soon hear the sound of app-lause

5 romantic comedies to raise your spirit during the MCO