What's next for the winners of the 29th Malaysia Film Festival

The cast and crew of Adiwiraku posing with the award for Best Film at the 29th Malaysia Film Festival in Putra World Trade Centre on Saturday night.

For the past two weeks, Adiwiraku writer Jason Chong said he had trouble sleeping.

He blamed it on the secrecy surrounding the 29th Malaysia Film Festival (FFM29) nominations list. The organising committee announced in late August it would not be revealing the nominees until the awards night.

“It was hard!” Chong shared. “People kept telling us that our movie was going to get nominated. But you can’t be too confident because you don’t want to end up being disappointed.”

Well, Chong can finally get a good night’s sleep. On Sept 23, the culmination night of FFM29 held at Putra World Trade Centre in Kuala Lumpur, Adiwiraku was named the Best Film.

Adiwiraku’s victory was a case of life imitating art.

The film, based on true events, tells the story of a group of underdog students at a rural school triumphing – against all odds and expectations – in a state-level choral speaking competition.Likewise, Adiwiraku bests multimillion ringgit productions when it beat fellow Best Film nominees Redha, Interchange, Hanyut and Desolasi.

“We were the underdogs at this event. We made the movie with a RM600,000 budget, hoping people would appreciate the story we were trying to tell,” said director Eric Ong.

Chong, who also took home the award for Best Original Story, believed the FFM29 judging committee was moved by Adiwiraku’s inspiring message on the dedication of teachers and overcoming self-doubt. It’s based on the true story of teacher Cheryl Ann Fernando and her experience at SMK Pinang Tunggal in Kedah.

Sangeeta Krishnasamy is named Best Actress for her performance in Adiwiraku.

Sangeeta Krishnasamy who plays Cheryl in the film was named Best Actress, beating nominees like Yeo Yann Yann (You Mean The World To Me) and Sharifah Amani (Pekak). In a tearful acceptance speech, Sangeeta credited Cheryl for her success.

“I’m only here to represent the real heroine of the story, and that’s Cikgu Cheryl, and the students whom I regard as the superheroes of SMK Pinang Tunggal,” she said.

Husband and wife, Namron and June, receiving the acting trophies for Redha. Harith (centre), who plays their characters' son in the film wins in the Best Child Actor category.

Redha, a family drama about autism, took home four awards including Best New Director for Tunku Mona Riza. Previous female directors to have won in this category are Zarina Abdullah for Chermin (2007) and Ellie Suriati (Penanggal, 2014).

“This win means a lot,” said Mona. “This film has travelled everywhere but there is no feeling like winning back at home.”

“I’ve always believed that my wife is a talented actress. But she quit acting because of depression. Mona was the one who managed to talk her into accepting the part in Redha. So when June was announced as Best New Actress winner, I was happy because she deserves it,” said Namron.

He continued: “Redha not only gave us these awards but most importantly, it also helped us as a family.”

Interchange was victorious in four categories. Dain Said was named Best Director beating the likes of U-Wei Saari (Hanyut) and Saw Teong Hin (You Mean The World To Me) while Shaheizy Sam won Best Supporting Actor.

This is Shaheizy’s third FFM win after Best Supporting Actor in 2010 for Evolusi KL Drift 2 and Best Actor for Kongsi in 2011.

“If anything, I owe this success to my director Dain because he knows how to mould an actor,” Shaheizy said.

The Best New Actor award went to John Tan for his role in You Mean The World To Me. Director Saw received Best Screenplay, and the film also won Best Score.

John Tan with his trophy for Best New Actor.

What’s next for FFM winners?

Now that the dust has settled on FFM29, it’s time to look forward to exciting new projects.

Mona revealed that she’s working on a film based on the life of paralympic athlete Ridzuan Puzi. “I’m in the midst of developing a script and talking to investors. Hopefully it will work out,” she stated.

Dain is looking to adapt Indonesian novel Robohnya Surau Kami and then focus on developing a sci-fi feature called Vektor.

Meanwhile, the team behind Adiwiraku is going to experiment with a different genre. “We’re in discussions to make a movie about the Malaysian coast guard and another on World War II. Hopefully, we can start production next year,” Ong said.

A victory at FFM means living up to expectations.

“We at Sol Pictures never thought we’d hit the jackpot with our first production. Of course, we’re going to work harder to deliver each time,” Chong explained.

What's next for the winners of the 29th Malaysia Film Festival 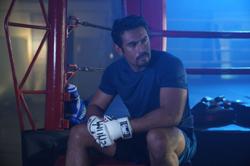