7 biggest winners and losers at Cannes so far

From left: British actress Emma Thompson, US actor Ben Stiller and US actor Adam Sandler arrive at the screening of the film The Meyerowitz Stories at Cannes. Photo: AFP

The 70th Cannes Film Festival got off to a sluggish start. Film buyers griped that packages were underwhelming and overpriced. Many of the competition titles, from The Square to Wonderstruck, were met with mixed reviews.

There was a shortage of star power on the Croisette, and worst of all, beefed-up security measures dictated that premieres start earlier. That led to a horde of men in tuxedos sweating on the sun-drenched Palais red carpet, instead of benefiting from the cool breeze of an evening in the south of France.

Here are the 7 biggest winners and losers of Cannes so far:

The A-list star, who made his Cannes debut by serving on the jury, managed to bring a much-needed dose of fun to the buttoned-up Palais.

"West Philadelphia is a long way from Cannes," he said. When a reporter noted that ex-juror Kirsten Dunst donned 28 outfits on last year's red carpets, Smith had the jokes ready. "I'll be going for 32," he said, admitting the warm weather threw a wrench in his fashion plans.

"I wanted to be South of France Cannes sexy, but all that went out the window."

Forget about studios splurging US$20mil (RM8.6mil) on their next big hits. Not even a trickle of small deals made much of a splash because this year's strongest projects had been scooped up at the script stage or at festivals like Sundance or SXSW. 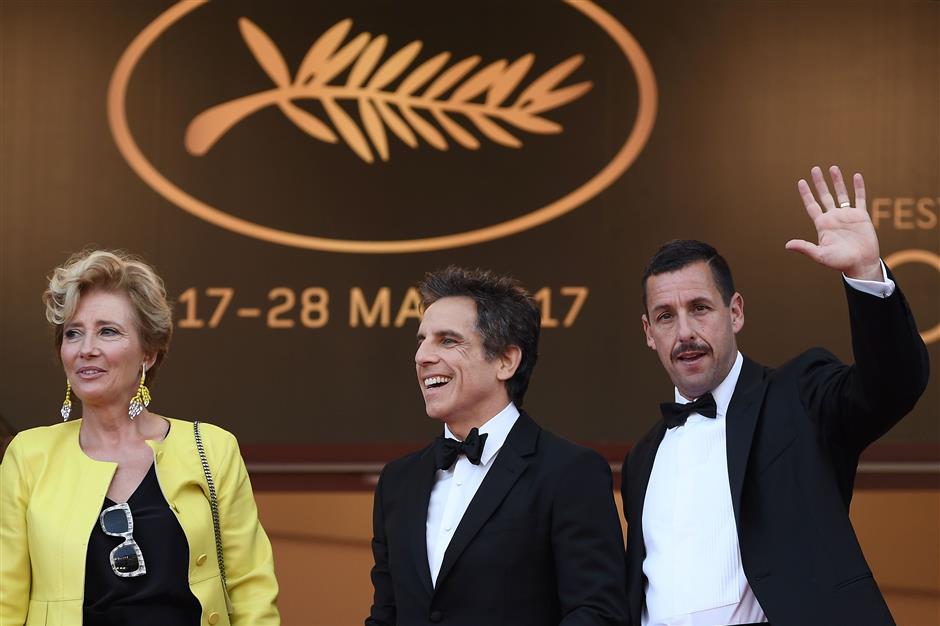 From left: British actress Emma Thompson, US actor Ben Stiller and US actor Adam Sandler arrive at the screening of the film The Meyerowitz Stories at Cannes. Photo: AFP

3. Winner: The Killing Of A Sacred Deer

Yorgos Lanthimos' terrifying drama starring Colin Farrell as a heart surgeon and Nicole Kidman as his wife is the best-in competition title yet to screen at Cannes, met with a rapturous standing ovation at its premiere. For Kidman, who has four projects in the festival, the role is a tour-de-force performance that could be a fall awards-season contender.

4. Loser: How To Talk to Girls At Parties

The John Cameron Mitchell sci-fi dramedy, about an alien (played by Elle Fanning) who romances a 1970s punk-rocker in England, received the most scathing reviews out of Cannes.

One critic called it "unreleasable".

The Revenant director and his frequent director of photography dazzled critics with virtual reality installation Carne y Arena, which puts viewers in the shoes of illegal immigrants crossing the US border. Many speculated it could mark a new chapter in the way audiences consume stories.

The Oscar-winning French actress's performance as a ghost in the opening night film Ismael's Ghosts landed with a thud.

The streaming giant arrived in Cannes for the first time ever with two competition premieres: Okja and The Meyerowitz Stories.

And it got caught up in controversy after French distributors protested its inclusion in the world's most glamorous festival and jury president Pedro Almodovar huffed that he couldn't imagine giving the Palme d'Or to a movie that didn't open in theaters first. But when the dust cleared, Netflix had two of the strongest English-language films at Cannes.

In other words, Netflix doesn't need Cannes, but it's hard to argue the reverse would be true. – Reuters/Variety/Ramin Setoodeh

7 biggest winners and losers at Cannes so far