Mixed doubles pair Chan and Liu Ying were seen shooting some scenes with Mediacorp artiste Ian Fang in Kuala Lumpur on Oct 5. One scene saw the shuttlers playing a young couple having a major disagreement in front of their apartment.

Goodbye Mr Loser director Adrian Teh said he had wanted to cast the shuttlers even before they became Olympic stars. “After watching them bring us Olympic glory, I knew that audien­ces would want to see more of them so I arranged for them to be in this movie together,” said Teh, 32, who confessed to being an avid badminton player himself.

He was full of praise for the shuttlers. “For first-timers, they are very natural in front of the camera. They even managed to deliver some humorous elements that we asked of them,” he added.

Chan, 28, may be in his first movie but is no stranger to showbiz. He is married to local singer Ester Cham and they have a son and a daughter.

“I’m game for this new expe­rience as long as it does not interfere with our badminton training,” said Chan, who added that he and Liu Ying had trained as usual in the mornings.

Liu Ying, 27, said she was glad to land the role. “It was actually an easy collaboration,” she quipped.

V Shem, who won the doubles silver medal with Tan Wee Kiong, will be acting as the cousin of the main character portrayed by Fang. 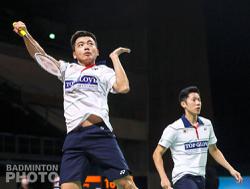