Descendants is a TV movie project from Disney that is set for a 2015 release.

Mal, Evie, Jay and Carlos are the children of Maleficent, the Evil Queen, Jafar and Cruella respectively in Descendants, who are invited to return from exile and join a school attended by the children of Disney’s interpretation of fairytale heroes and heroines.

Integration means mixing with the offspring of Belle and the Beast, Dopey the dwarf, Cinderella, the Fairy Godmother, Sleeping Beauty and Mulan, among others.

In Descendants, Booboo Stewart will play Jay, the son of Jafar.

Sofia Carson is Evie, child of the Evil Queen.

But the protagonists’ parents don’t appear to have reformed during their expulsion on the Isle of the Lost and want to use their children as a means of escaping back into the Auradon kingdom.

Taking the lead roles are Dove Cameron of Disney series Liv And Maddie as Mal, Booboo Stewart of Twilight and X-Men: Days Of Future Past as Jay, Cameron Boyce of Jessie and Mirrors as Carlos, and Faking It guest Sofia Carson as Evie.

A first photo from the set demonstrates that the four high school hopefuls aren’t looking to blend in all that much – though Jay stands a better chance than his multi-coloured companions. 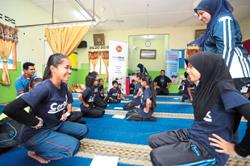