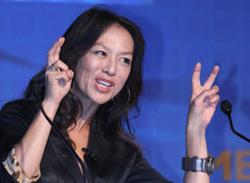 The novels of Colette, whose body of work begins in the early 20th century and is marked by heroines seeking emancipation, still resonate today, 150 years after her birth. Photo: AFP

A century before #MeToo, French author Colette dumped a sleazy husband who took the credit for her work to throw herself into a life of free love that she fictionalised in groundbreaking novels about the lives of women.

France this week celebrates the 150th anniversary of the birth of the novelist whose uproarious life featured in the 2018 Hollywood biopic Colette starring Keira Knightley.

Plucked from the Burgundy countryside by her first husband - a literary agent 14 years her senior - he put her to work writing about her schoolgirl fantasies in the wildly popular Claudine books that he published under his own name.

Colette went on to cause scandal after scandal writing about hitherto taboo subjects like domestic violence, anorexia and fake orgasms, before becoming a music hall dancer, mime artist and weightlifter.

She was also among the first women to wear trousers and have a facelift in a dizzying life that included three marriages and a multitude of affairs with both men and women. Photo taken in 1948 at the home of the writer Colette in Paris shows (from left) French film director Jacqueline Audry, Colette and actress Daniele Delorme during the signing of the film adaptation contract for 'Gigi'. The novel - written by Colette in 1944 - was adapted for the cinema and the theatre many times, including in 1951 with Audrey Hepburn who made her Broadway debut as the title character. Photo: AFP

As the American novelist John Updike said, "In the prize ring of life few of us would have lasted 10 rounds with Colette."

Sidonie-Gabrielle Colette was born in a Burgundy village in 1873 and was swept off to Paris at 20 when she married the womanising music critic Henry Gauthier-Villars, aka "Willy".

He introduced her to high society salons frequented by novelist Marcel Proust and composer Claude Debussy, where she was gently mocked for her Burgundy accent and long blonde plaits.

Willy encouraged her to write about her life at school, telling her not to spare "the juicy details".

Colette's mother had instilled in her a love of nature that made her fiercely attuned to the senses, and she brought that to the page.

First in 1900 came the homoerotic, coming-of-age tale Claudine At School, followed by Claudine And Annie", Claudine In Paris and Claudine Married. All were instant bestsellers.

After spicing them up, Willy put the books out under his own name. A portrait from 1952 shows French writer Colette with glass balls from her collection, taken at her Parisian home. Photo: AFP

Colette eventually moved in with her lover, cross-dressing noblewoman Mathilde de Morny, nicknamed "Missy", and filed for divorce after learning Willy had sold the rights to her books.

In between affairs with other women, Colette learned to dance and took to the stage in 1906, causing scandal wherever she appeared, once flashing her breasts and causing a riot when she kissed her lover Missy at the Moulin Rouge in Paris.

Her semi-autobiographical novel The Vagabond about a divorced music hall dancer was hailed by critics in 1910 and Cheri, about an affair with a much younger man, followed in 1920.

But her best known work abroad, Gigi, the tale of a young girl being groomed to become a courtesan, did not come until 1944, and later became a Hollywood musical.

Colette's second marriage was to a newspaper editor and in 1913 she gave birth to her only daughter, also named Colette, whom she promptly entrusted to a nanny.

Nearing her 50s, she seduced her 17-year-old stepson, with whom she had a five-year affair that ended her marriage. Photo taken in February 1950 in Paris shows French artist Jean Cocteau (right) kissing the hands of writer Colette, seated next to actress Valentine Tessier (second, right) after the performance at the Theatre de la Madeleine of the play 'Cheri' (a novel by Colette published in France in 1920). Photo: AFP

Her third marriage to Maurice Goudeket, a businessman and journalist, was much happier but their bliss was shattered by World War II when he was among thousands of Jews rounded up in Paris for deportation to the Nazi death camps.

Colette used her connections to secure his release, but in one of the many contradictions of a life lived on her wits, she also wrote for collaborationist magazines.

Despite yearning for the freedom enjoyed by men, she was also scathing about feminists, declaring once: "You know what the suffragettes deserve? The whip and the harem."

Bedridden in later years by arthritis, she was the first French woman to be given a state funeral when she died aged 81 in 1954. - AFP