A chance to re-explore the purity and power of handwriting Although it has been proven that typing is far faster than handwriting, many fans of pen and paper are keeping the medium alive. Photo: AFP

Nearly all signs seem to point to the near total domination of the computer keyboard in our ultra-connected societies, with the humble pencil remaining a staple just for young school pupils.

However, handwriting instruments are far from relics; on social networks, handwriting is in vogue, at least among a certain group of people embracing the "journaling" trend.

A look at our ambiguous relationship with the pen, on the occasion of National Handwriting Day (in the United States).

Each year, Jan 23 is dedicated to celebrating handwriting. The mere existence of this theme day shows how much our relationship to writing has evolved over the centuries. But in fact the day was created at the behest of American professional association Writing Instrument Manufacturers way back in 1977, before personal computers arrived en masse in homes.

The advent of the Internet, however, has profoundly changed our relationship to writing, as evidenced by a 2014 survey commissioned by Docmail. It found that one in three Britons had not, at the time, written by hand in the previous six months, according to the Guardian.

On average, respondents hadn't handwritten a document for 41 days. However, it's likely that people actually write more than they think. But not necessarily in the "old-fashioned" way, ie, with a pen on a sheet of paper.

Letters have been replaced by text messages, which are faster and can be personalised thanks to emojis. The traditional shopping list is now written on the Notes application of the smartphone to avoid forgetting it on the kitchen table when going to the supermarket. Meeting minutes are written directly on Google Docs for efficiency (and productivity).

"We shouldn't cling to cursive"

Digital tools undoubtedly allow us to write texts so quickly that they have replaced paper and pen in many areas of our lives. Our relationship to how we write has evolved so much that the United States has even decided that cursive writing, that is linking the letters of a word together, is no longer a mandatory part of the "Common Core Curriculum Standards," the foundation shared by all states in the country.

Since 2013, American students have been required to learn keyboarding and "script" (print) writing, but they are no longer required to learn the intricacies of "attached" writing. When it was enacted, this reform caused significant controversy among those nostalgic for the pre-digital era who believe that the mission of the school is to maintain the handwritten tradition among younger generations.

Others, on the contrary, welcomed this initiative as part of the zeitgeist.

"States and schools shouldn’t cling to cursive based on the romantic idea that it’s a tradition, an art form or a basic skill whose disappearance would be a cultural tragedy. Of course, everyone needs to be able to write without computers, but longhand printing generally works fine," the Los Angeles Times said in an editorial at the time.

While several US states reversed this controversial decision in 2017, Finland seems to have chosen sides in the battle between pen and keyboard. Since 2016, learning cursive handwriting is no longer mandatory in the Nordic country, whose school system is considered one of the best-performing in the world.

France, on the other hand, has embraced handwriting in schools, colleges and high schools, even though university lecture halls are increasingly full of students taking notes on their laptops. Many claim to be more effective this way.

Writing by hand for better comprehension

But is this really the case? While there is evidence that typing on a keyboard is significantly faster than handwriting, many experts are not about to give up on writing on paper entirely.

Researchers at Princeton and UCLA found in 2014 that while notes taken on a computer are generally longer in length than those written by hand, they are also more superficial and less structured.

Students also seem to absorb their content less effectively when they wrote them with a keyboard rather than a pen. Other scientific work claims that handwriting plays a key role in memorizing the alphabet and learning to read. But not all experts agree on this last point.

At first glance, everything seems to point to the pen being destined to become an artefact of the not-so-distant past, just like the fountain pen and the typewriter. But never underestimate the impact of social networks.

Paradoxically, for a digital platform, handwriting is a trendy practice on Instagram and TikTok. On the latter, the hashtag #handwriting counts more than 7.4 billion views. It is mentioned in videos where internet users film themselves trying to create beautiful lines of letters on sheets of paper or in their Bullet Journals.

These modern-day planners/notebooks, popularised by New York web designer Ryder Carroll, are halfway between a diary, an agenda and a gratitude book.

It has become an indispensable tool for all planning professionals as well as for fans of personal development. The idea is that you write down the major events of the year to come, as well as your daily appointments, your desires and your personal aspirations. But you can't do your "BuJo" on a computer!

They have to be written by hand in order to allow their owners to take the time to concentrate on themselves, in accordance with the "slow life" philosophy.

Only handwriting facilitates this introspection, according to Bullet Journal enthusiasts.

The interest on the Internet for all things calligraphy and handwriting shows that the pen and pencil, still have a bright future ahead of them. Despite the omnipresence of the computer keyboard and now of the dematerialised keys of our smartphones in our lives. This is not so much a disruption of our relationship with the written word as a natural evolution. After all, paper was preceded by parchment, papyrus and clay tablets. The media change, but writing continues - at least for now. - AFP 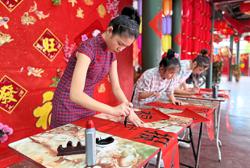 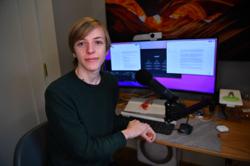