Against a backdrop of Russian bombardments, border closures and a nail-biting 3,500km truck journey across Europe, Spain's Thyssen-Bornemisza National Museum has teamed up with the National Art Museum of Ukraine to secretly bring dozens of 20th century Ukrainian avant garde artworks to Madrid for a unique exhibition and a show of support for the war-torn country.

In The Eye Of The Hurricane. Modernism In Ukraine 1900-1930s, opens to the public on Tuesday, featuring some 70 works mostly from the Kyiv gallery and the country's theatre, music and cinema museum. It will run until next April.

The show constitutes the first time that such a large body of modern art has left Ukraine. The circumstances under which it has been organised make it a feat of cultural defiance.

"This is super important for us as a way to protect our heritage, that we managed to take the works out of the war zone,” says Katia Denysova, one of the exhibition's curators. A journalist takes a picture near 'The 1st Of May' by Viktor Palmov in the first decades of the 20th century at the Thyssen-Bornemisza museum in Madrid. Photo: AFP

The show is the brainchild of Swiss-born art collector and activist Francesca Thyssen-Bornemisza, founder of the Museums for Ukraine support network, and her friend, Ukrainian art historian and curator Konstantin Akinsha. They came up with the idea following Russia's invasion of its neighbour last February.

The central concept was to counter Russia's narrative that Ukraine doesn't rightfully exist and that its art is really Russian.

"We wanted to act as a protector of these works that are extremely unique and rare, but also to do it by celebrating the value of Ukraine’s immense legacy that has been completely forgotten and appropriated by Russia over the last decades,” said Thyssen-Bornemisza, a daughter of the late Dutch-born industrialist and baron whose collection formed the basis of the Madrid gallery when it opened in 1992.

An international art exhibition of this type would normally take several years to organise. This one, with the blessing of Ukraine President Volodymyr Zelenskyy, came together in a matter of months. A man looks at artwork by Ukrainian artist Vasyl Yermilov called 'Nove Mystetstvo' during the inauguration of the Ukraine art exhibition at the Thyssen-Bornemisza museum in Madrid. Photo: AP

Getting the paintings to Madrid was the stuff of wartime drama.

After months of preparations, the works were packed into two trucks in the early hours of Tuesday (Nov 15), just hours before Russia unleashed a wave of attacks on the Ukraine capital and key national infrastructure targets.

Organisers had not been banking on Russia attacking that day, saying the attacks normally occur on Mondays. But with a military escort, the trucks left the city safely.

On their way west, however, they had to pass through the city of Lviv, which also came under surprise attack. They eventually made it to the Polish border early Wednesday but it was closed following the landing of a stray Russian-made missile just inside Poland that initially triggered fears of a major escalation of the war. Against a backdrop of Russian attacks, border closures and a nail-biting journey across Europe, Madrid's Thyssen-Bornemisza National Museum has teamed up with Kyiv's National Art Museum of Ukraine to secretly bring dozens of Ukrainian 20th century avant garde artworks by road to the Spanish capital for a unique exhibition and statement of support for the war-torn country. Photo: AP

Eventually the border reopened, and the convoy sped to Madrid where it arrived Sunday, Nov 20.

The paintings, ranging from figurative art to futurism and constructivism, stem from an exceedingly turbulent period for Ukraine, with collapsing empires, world war, revolutions and the war of independence before the eventual creation of Soviet Ukraine. The show includes works by Mykhailo Boichuk, Davyd Burliuk, Vadym Meller, Kostiantyn Yeleva and Vasyl Yermilov.

Under Soviet leader Josef Stalin, repression in Ukraine led to the execution of dozens of writers, theater directors and artists, including some whose work is on display in the Spanish capital. The Holodomor, the manmade famine of 1932-33 which was a result of Soviet policies, killed millions of Ukrainians.

For much of the early 20th century, many of the works were locked away by Soviet authorities, classed as worthless because their creators were deemed to be bourgeois. That, unintentionally, led to their conservation. 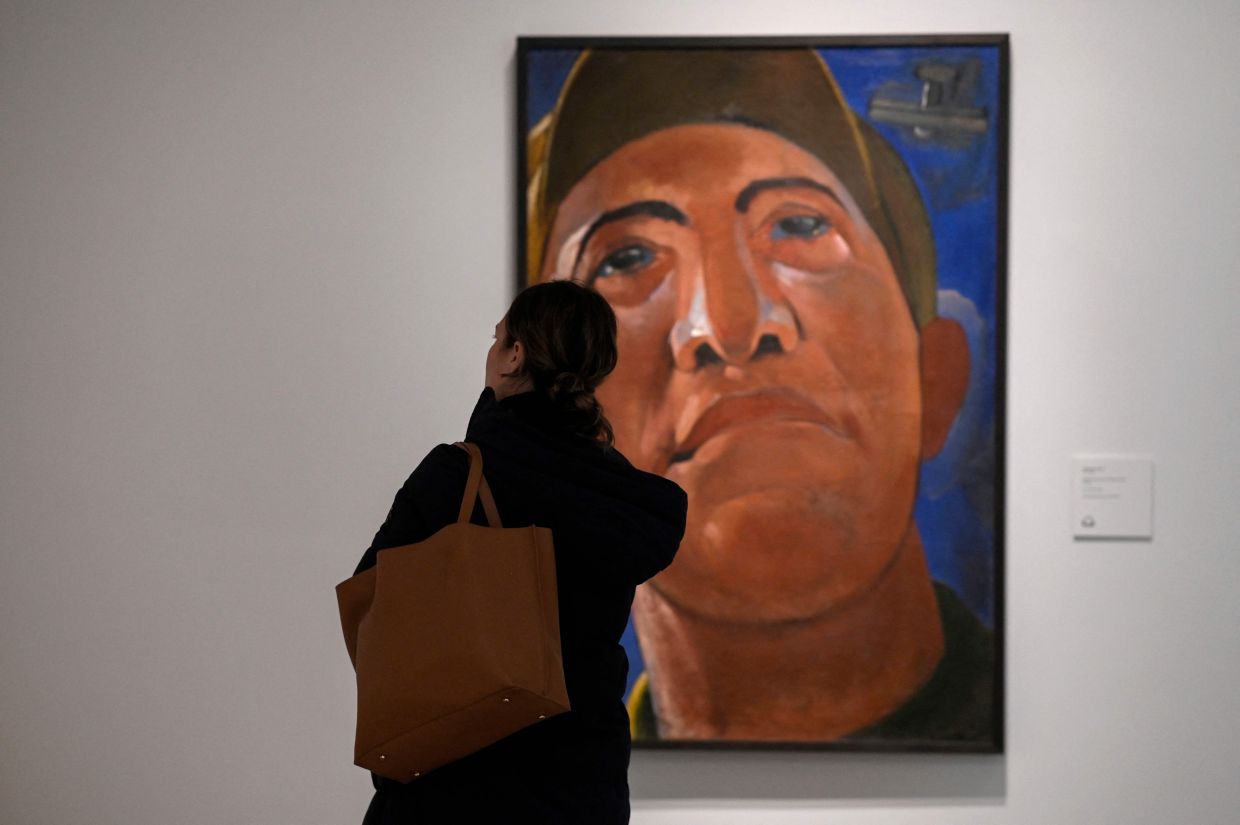 A journalist stands by a 'Portrait' by Kostiantyn Yeleva. Photo: AFP

The works went back on display with Ukraine’s independence in 1991 but later had to be put back into vaults and warehouses to protect them from Russia's invasion.

"We know what happens when Russians occupy territories and get hold of the museums. They loot everything,” said Denysova, referring to the fate of the art museum in Kherson, a southern Ukraine city which Kremlin forces occupied for eight months until Ukrainian forces recaptured it earlier this month.

In a video message for the inauguration, Zelenskyy said terrible times had returned to Ukraine but there was hope.

"At this exhibition you can see Ukrainian art, which was also created in terrible times,” said Zelenskyy.

"Terror tried to rule then as it does now. But just like in the 20th century, humanity must win and just like then, culture must win," he added.

In April, the show will move to Cologne, Germany, where it will be on display until September. - AP