Props used for the TV series 'Squid Game' are seen on display at the 'Hallyu! The Korean Wave' exhibition at the Victoria and Albert museum in London. Photo: AP

From the bright pink guard costumes in hit Netflix series Squid Game to a large sculpture of rapper G-Dragon, London's V&A museum is celebrating South Korean popular culture and its rise to global prominence in a new exhibition which opens this weekend.

Among the items on display at Hallyu! The Korean Wave are K-Pop costumes, K-drama props as well as a replica of the bathroom set in Oscar-winning film Parasite.

"This exhibition is actually celebrating the vibrant and colourful popular culture from South Korea from its inception to its place on the global stage," said curator Rosalie Kim at a recent preview.

"'Hallyu' actually means Korean wave and it refers to this meteoric rise of popular culture from South Korea that has taken the world by storm in the past few decades."

The exhibition is split into different sections including K-pop and its fans, television drama and cinema, fashion and beauty.

Greeting visitors is the pink jacket singer Psy wore in the music video for his 2012 mega hit Gangnam Style. Other outfits on display include ensembles worn by G-Dragon and K-pop groups ATEEZ and Aespa as well as colourful designer creations.

From the world of television, there are costumes from historical dramas as well as the recognisable pink boiler suits and a green tracksuit from Squid Game.

The Parasite bathroom replica is the first time the set from the protagonist Kim family's basement flat has been recreated, with the museum working closely with the film's production designer Lee Ha-jun. Props used for the TV series 'Squid Game' are seen on display at the 'Hallyu! The Korean Wave' exhibition at the Victoria and Albert museum in London. Photo: AP

Multiple screens, left, show a music video of PSY's 'Gangnam Style', alongside PSY's bubblegum pink jacket from the video, right, designed by Dsquared2, at the 'Hallyu! The Korean Wave' exhibition at the Victoria and Albert museum in London. Photo: AP

A collection of contemporary Korean fashion pieces including Miss Sohee's full-length 'The Peony Dress', 2020 graduation collection, 'The Girl in Full bloom', centre back, are seen displayed at the 'Hallyu! The Korean Wave' exhibition. Photo: AP

A museum attendant is seen looking at an immersive re-creation of the bathroom set from the Oscar award-winning film 'Parasite' directed by Bong Joon-ho, at the 'Hallyu! The Korean Wave' exhibition. Photo: AP 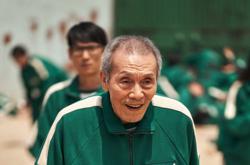