A drawing of Queen Elizabeth II and Paddington Bear is pictured next to a marmalade sandwich, as an allusion to her jubilee video with the cartoon character, on a makeshift tribute by Buckingham Palace in London. Photo: AP

Well-wishers leaving memorabilia to honour the life of Britain's Queen Elizabeth II should not leave marmalade sandwiches in Green Park as tribute because of "the negative impact on the park's wildlife," Royal Parks staff says.

Following a comedy sketch between Paddington Bear and the queen filmed for the Platinum Jubilee earlier this year, in which marmalade sandwiches were a key topic of conversation, some mourners have left the beloved character's favourite snack alongside floral tributes at Buckingham Palace and in the neighbouring Green Park. Men sit next to a Paddington Bear stuffed toy placed in front of a Union flag umbrella as people wait opposite the Palace of Westminster in London. Photo: AP

However, the Royal Parks organisation, which is in charge of the official Floral Tribute Garden in Green Park, said: "We are asking people not to leave marmalade sandwiches because of the negative impact on the park's wildlife."

Mourners are still able to leave teddies and other artefacts, the charity has said, however they added that they "would prefer that they didn't" for sustainability reasons. - dpa 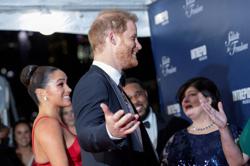