As a young boy taking the subway to and from school in 1970s New York City, American graffiti and street art legend Josh “Stash” Franklin was captivated by the murals that were illegally painted on the sides of the trains.

“It was the time of the second generation of New York City subway writers. The murals had evolved from simple, straight letters – which are the most beautiful things – to letters packed with colour, and pop and cultural references. It was an incredible thing to witness as a kid,” says the 54-year-old at local artist Jahan Loh’s studio in Mandai Estate in Singapore.

Void Deck – an art space in Jalan Besar founded by Loh and entrepreneurs Jazz Li and Cheo Ming Shen – brought Franklin to Singapore for a week-long residency, which will culminate in an exhibition at its premises.

Franklin, who arrived from the United States on June 28, is eager to get to work, but notes that he has come a long way from his humble beginnings in the graffiti movement.

“It certainly wasn’t sitting in a beautiful studio in Singapore, with great people asking if I want another seltzer,” he says with a smile.

It was a time before modern distractions like reality television or the Internet, when mothers would send their kids out of the house with instructions to stay out until dinner.

And so, armed with enough subway tokens to take him all over New York City – from his home in the Upper East Side to neighbourhoods like Brooklyn – the boy picked up a can of paint and tried his hand at graffiti.

“It was the early version of branding – (my friends and I) were writing our own names. And we’d go to other neighbourhoods and write our names there.”

Their “writing” was more like large-scale calligraphy, characterised by vibrant colours and bold line-work.

But their adventures were not the safest after-school activities, he admits.

“We’d be standing in a subway tunnel in the dark on a narrow ledge with a can of paint, and the train could come any minute. We didn’t have the luxury of standing back and seeing how a piece of art was coming along. And it was dangerous – you could get arrested or killed.”

Recalling that he was robbed at gunpoint once, he says: “We did put ourselves in some awkward situations, but it was how we learnt – by going too far and then pulling back.”

And in any case, the sense of pride and accomplishment that came with completing a work was unbeatable.

Train graffiti has largely died out – Franklin says he was part of the last true generation of subway writers – replaced by street art which has found its way into the commercial world.

He is a pioneer of that movement, the first graffiti artist to collaborate with sportswear giant Nike on sneakers.

Loh, 45, says Franklin opened the door for other artists to work with big brands.

“Celebrities wear his stuff and he’s collaborated with the likes of (late American basketball star) Kobe Bryant. Kanye West even stood in line to get his autograph.”

The move to commercial work, Franklin says, was a natural one for him, given that he had been “hustling” since his teens.

“During high school, I was already trying to sell paintings to my mum’s friends – ‘let me do your daughter’s name’ – that kind of thing. And then I started making T-shirts very early in my career because I needed money to pay for my painting studio. That began my work in graphics for streetwear,” he says.

Some of his contemporaries chose not to turn their passion into business, but he notes: “I was also coming up at a time when the elder statesmen (of pop art and graffiti) had moved on to showing their work in galleries, so I had that example to watch and learn from.”

He was just 17 when he had his art shown at the renowned The Fun Gallery in Manhattan’s East Village in the early 1980s – alongside artistic icons of the time, including Jean-Michel Basquiat and Keith Haring.

And now, Singaporeans will have the opportunity to see original work made by Franklin in Singapore, as part of the free Subblueminal: Ultramarinus showcase organised by Void Deck in partnership with watch brand G-Shock. It runs from July 10 to Sept 5 at Void Deck.

“It’s nice to be able to immerse myself in the culture here – smelling the smells, eating the food and being around the people – rather than just shipping a bunch of art over. To have a local breakfast before coming over to the studio and getting to work,” he says.

Noting that he finds inspiration in the little details of everyday life, he adds: “It could be the smallest thing – rust on a pole, observing what oxidation does to the paint, how it warps the colours – and then I find myself wondering how I can take that palette and incorporate it into my next work.”

During his visit, Franklin will also launch a retrospective book, Subblueminal: Visual Maintenance In The Art Of Josh ‘Stash’ Franklin Vol 1, about his career.

Only 500 copies of the first edition are printed and exclusively available in Singapore. It retails for S$68 (RM214) at the exhibition and Void Deck’s website.

The book tells the story of his first act, Franklin says, chronicling how his artistic journey dovetailed with the birth and subsequent explosion of streetwear. It features contributions by peers and fellow street art giants such as Kaws, Futura and Zephyr.

“I started as a graffiti painter and I’m trying to get back to painting, back to how the story started (before the commercial work).

“That’s how I want to go out ... to walk into the sunset with a can of paint in my hand,” he says. – The Straits Times/Asia News Network 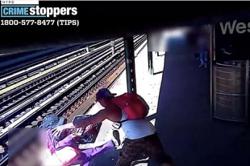