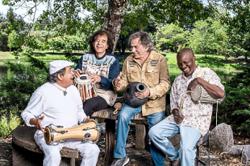 Archaeologists excavate ancient bones and vessels from a previous Inca culture that were discovered by city workers digging a natural gas line in the Brena neighbourhood of Lima, Peru in early 2020. About 300 archaeological finds, some 2,000 years old, have been reported over the past decade during the building of thousands of kilometers (miles) of natural gas pipelines in the capital. Photo: AP

Hipolito Tica had saved for decades to finally build himself a proper house in a working class neighbourhood of Lima. His problem was what to do about "the neighbours” - as he called the centuries-old mummies buried below.

The mechanic had known they were there since the day in 1996 when he tried to dig a latrine on the lot, which is a few yards (meters) from the El Sauce archaeological site on the eastern edge of the Peruvian capital.

Taking a break from hefting bricks, Tica recalled that he had been working to loosen the earth with a metal rod when the ground suddenly began to collapse.

"I got out of there fast as a spider,” he said.

Tica found a flashlight and went to check out the hole that had opened at his feet, some 5m (16 feet) deep and 3m (10 feet) wide.

"I saw some bundles - the light was bright enough; they were funerary bundles,” he said.

He wasn't sure what to do, who to tell.

Like roughly a half million other people around the edges of Lima, he had just moved in, building a rudimentary adobe structure on the unoccupied lot without owning a title. So drawing the attention of authorities to an archaeological find could cost him a home.

In spite of that, he said he broached word of the discovery to some archaeologists who were excavating Incan ceramics from nearby streets where the city was installing water lines. He said they didn't pay much attention. He didn't press the issue.

So he decided to just co-exist with "the neighbours.” He covered the hole with an old door, a carpet he pulled out of an old car and a layer of dirt.

"Nobody noticed the hole,” he said.

As the years passed, Tico and his neighbours gradually won rights to the property in their new neighbourhood, He planned to build a house of brick and cement and along with neighbours applied for water and sewage service - which required approval from the Secretary of Culture and a local museum to ensure to ensure that they would not harm archaeological remains.

There Tica, who had little formal schooling, began to learn about the Incas and other early Peruvian civilisations.

Building the house correctly would mean laying a foundation and filling in the hole where the bodies were buried.

"I was worried,” he said. Friends advised him: "Just cover it, fill it with cement and you're ready."

But "I had a nagging worry that people in the future wouldn't know anything about this area. Part of history is here,” he said.

So he looked up an archaeologist, Julio Abanto of the Ruricancho Cultural Institute, who was doing research in the area, and told him, "I have a burial and I want you to see it.”

Abanto and his team got government permission for an emergency dig.

The archaeologist lowered himself into the hole with ropes and found three bundles, each of which contained more than one individual - it's not yet clear how many - belonging to a culture within the Inca empire more than 500 years ago.

One of the skeletons has a sort of crown, bits of copper and a silver bracelet, as well as a spoon-like implement used for coca leaf with an image of a bird pecking at the head of a fish. There were also shells of a sort of mollusk prized in the region.

Archaeologists are still studying the finds, but Abanto said they likely belonged to members of a local elite who had been conquered by the Incas.

Now the bricklayers helping Tica build the house chew coca leaf as they work - a common practice in the region - and sometimes bury a few leaves at the now filled-in burial site.

"In our city, it's possible in these most casual ways to find surprising heritage that helps us reconstruct our local history," said Abanto.

In this case, it was "a 21st century family living above another from 500 years ago.” - AP