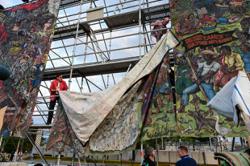 Two days after Germany's documenta show opened to the public, one of the works on display by Indonesian art group Taring Padi came under fire over depictions that both the German government and Jewish groups say went too far. The work was covered after requests and then dismantled. Photo: dpa

The collective curating the documenta contemporary art show apologised on Friday after an artwork displayed at the exhibition was denounced as anti-Semitic.

"We deeply regret the extent to which the imagery of our work People’s Justice has offended so many people," the Indonesian collective Taring Padi wrote in a statement on the documenta website.

"We apologise to all viewers and the team of documenta fifteen, the public in Germany and especially the Jewish community."

The People's Justice artwork was taken down within days of the 15th edition of documenta opening.

The large-scale banner features a soldier with a pig's face wearing a scarf with a Star of David and a helmet with the inscription "Mossad," the name of Israel's intelligence agency.

Taring Padi said it had learned from its mistake and recognises now that the imagery takes on a specific meaning in Germany due to the country's history.

"As a collective of artists who denounce racism in all its forms, we are shocked and saddened by the media furor that has labelled us as anti-Semitic," the statement added.

"We want to reaffirm our respect for all human beings, regardless of their ethnicity, race, religion, gender or sexuality."

Taring Padi had earlier denied accusations of anti-Semitism and expressed disappointment with the documenta crisis management. In comments to Der Spiegel, the collective said the artwork was an old painting that has often been shown at exhibitions and they would not have displayed it in Germany had they known it would cause distress.

But accusations of anti-Semitism linked to the show had already been brewing due to the inclusion of artists and groups that support a cultural boycott of Israel for its treatment of Palestinians.

German federal and state anti-Semitism commissioners are calling for consequences.

"It is urgently necessary to establish who is responsible for dealing with anti-Semitic imagery and other anti-Semitic content," the joint federal and state commission to fight anti-Semitism said on Friday.

The mayor of the city of Kassel, which hosts the art show, meanwhile said the decision by German Chancellor Olaf Scholz to not visit the exhibition was "inappropriate."

In a letter written to the chancellor, Christian Geselle said Scholz's decision "virtually places the documenta under general suspicion," according to quotes reported by the Hessische/Niedersächsische Allgemeine newspaper.

Further details were not disclosed and the contents of the letter were not made public, a spokesperson told dpa.

Scholz had decided not to visit this year's edition of documenta despite being a big fan and found the illustration at the centre of the row "abhorrent," a government spokeswoman said earlier in the week. - dpa

Between duty and dreams: a life-affirming exhibition that heals the wounds 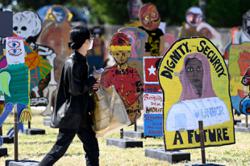