It is 278 years in the future and working is optional.

It is 33 years in the future and monsoon floods still plague states like Kelantan and Terengganu.

It’s a generation into the future and agriculture space vessels are the only safe haven for local plants and vegetables.

What does our future hold? Is it hopeful or is it bleak? Are the exhausting struggles of society today finally overcome, or have they overcome us?

In imagining alternative futures for the country, Project Future Malaysia was born, bringing together 10 artists, writers and thinkers with a simple question: what could we be?

It was 2018 when curator Kevin Bathman was first introduced to the concept of futures thinking.

A kind of antithesis to analytical thinking which focuses on coming to a specific, accurate conclusion, futures thinking considers as many answers as there are possible.

“A good example of this is the pop culture film Black Panther, speculative fiction literature by Octavia Butler and in music, the visual and musical aspects of Beyonce’s later works like Formation.

“I was first introduced to a form of futures thinking in a chapter called Afrofuturism when I was undertaking my Master of Cultural Studies in Goldsmiths, London. 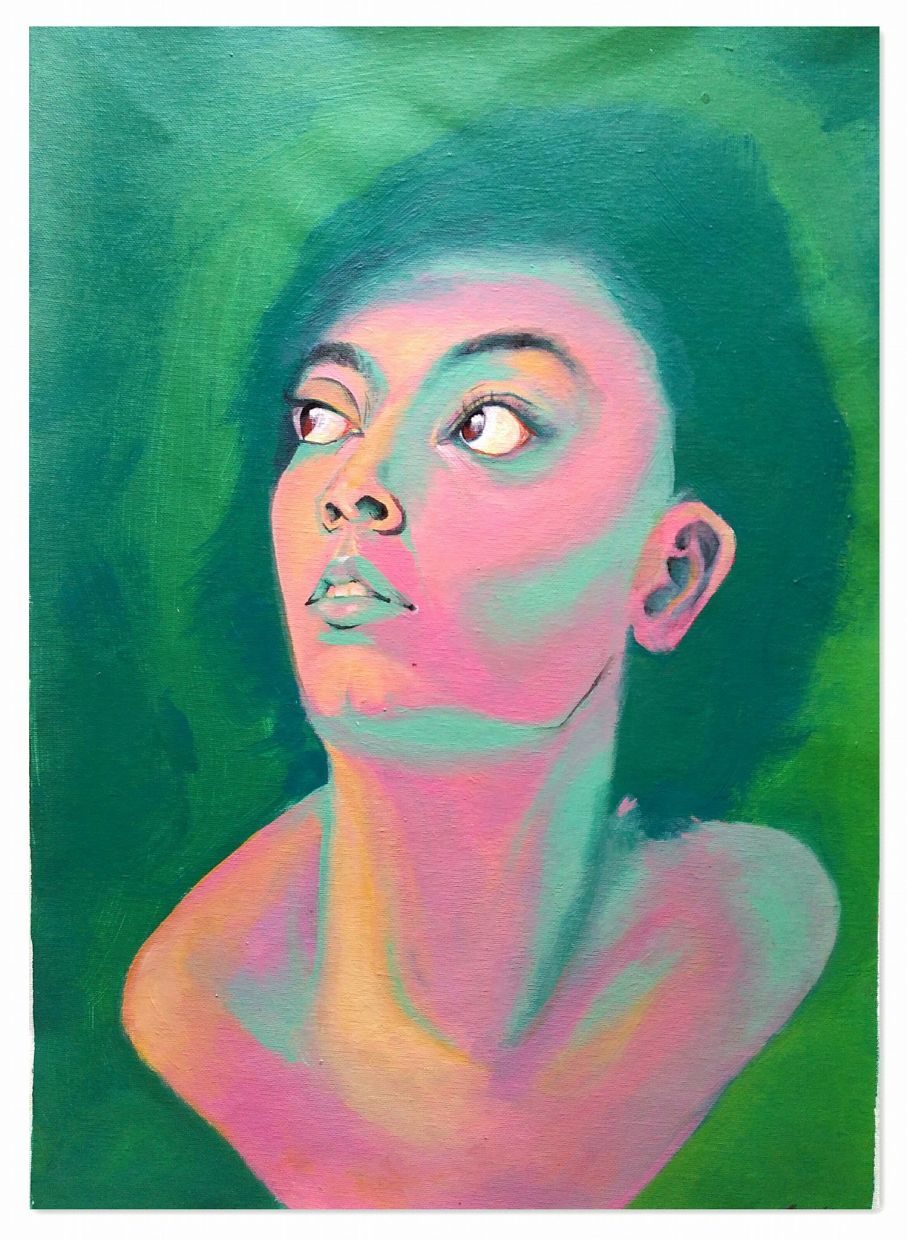 Sharmilla Ganesan’s fictional piece 'Sawda Chea Wants Everyone To Have Wawasan' is presented in a long-form interview article written about an artist wanting to see the return of wayang kulit. Illustration by Rupa Subramaniam. Photo: Project Future Malaysia

This movement and term began in the 1990s, and essentially paints alternative futures that celebrate cultures of the African diaspora,” says Bathman.

Studying in Britain under a Chevening scholarship, Bathman began to further explore futures thinking and how it could apply to a local Malaysian context.

“How do we connect this concept to Malaysia and Malaysian issues? It was from this (Afrofuturism) study that I drew inspiration to mould Project Future Malaysia – by exploring and addressing the themes and concerns of Malaysians and re-imagining possible futures for the nation,” he adds.

An open call for submissions was sent out last year and together with 10 other Chevening Alumni, project producer Bathman formed a selection panel to choose nine futures projects. 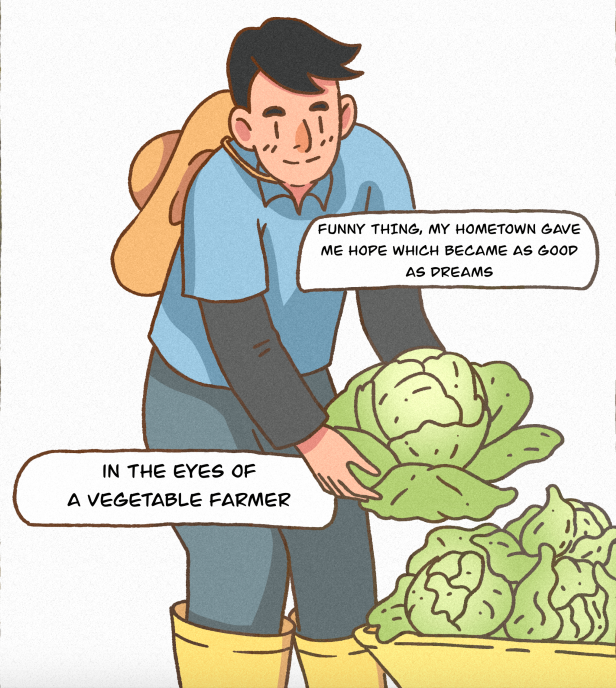 “By reimagining and manifesting better alternatives for Malaysia’s future, Project Future Malaysia hopes that Malaysians are freed from their everyday assumptions about what is possible and start imagining pathways that embrace bolder visions and hopeful possibilities for the country’s future.

“Prior to working on their creative pieces, the ‘creatives’ (10 in total as Yan Jing Tian and Wong Xiu Wei collaborated for one of the projects) were also introduced to the field of futures thinking; incorporating future thinking into artistic work via a workshop by Dr Zarina Nalla, the head of Futures Studies at International Islamic University Malaysia (IIUM),” explains Bathman.

From stories to poetry and paintings to comics, the ideas and subject matters of the final projects are unique and greatly varied.

Sharmilla Ganesan, a writer and radio presenter, paints a scene far off into the future in the year 2300 where almost everything is automated, travel is banned and all levels of society have reached a healthy level of equality.

Her piece – Sawda Chea Wants Everyone To Have Wawasan – is presented in a long-form interview article written about a 35-year-old artist who is bringing back the art form of wayang kulit. 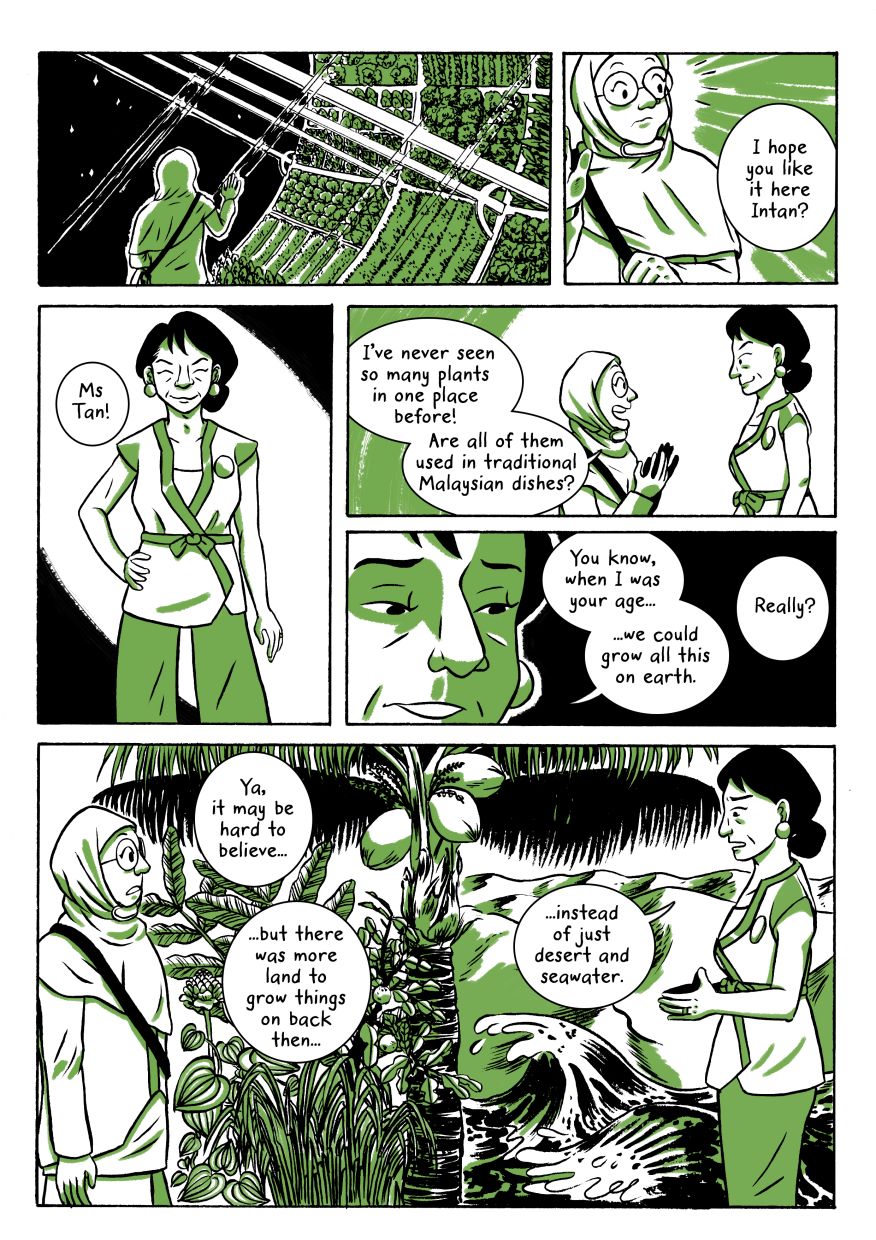 Max Loh's ‘Intangible’ is a short comic that explores what the future for Malaysian food culture and agriculture may look like through the eyes of Intan, a scholar from Earth visiting an agriculture vessel in space. Photo: Project Future Malaysia

With carefully-placed references to current happenings in the country, Sharmilla explores how Malaysians 300 years in the future might think about things like Wawasan 2020, bonded migrant labour and the identification of art through a racial lense.

And coffee, made by robots.

On the other end of the spectrum is Yan and Wong’s The Uncomfortable Malaysian Quiz.

An interactive offering, this questionnaire delves into concepts like identity, multiculturalism and nationalism while pondering upon the metaphors – melting pot, salad bowl, kaleidoscope – that are often used in describing societies.

Academic/artist David Tneh and writer Gema throw a spotlight on the country’s migrant workers through watercolour and poetry, while Shamrizan Jamaludin takes us to Kundasang, Sabah where juxtapositions can be seen at every turn.

In Banjir (Flood), Ackash Kumar unveils the long-lasting effects of floods on minds and hearts while in Jothi, M. Kumerainthiren Sivam charms us in Tamil with the story of a nonagenarian transwoman on the last day of her life. “This project allowed me to tell a story I had at the back of my mind for a long time now, centred on subjects I love – Malaysia’s food culture and natural heritage – through science fiction.

“With this comic, I hoped to instil a sense of urgency in readers about what is at stake should they choose the path of least resistance when adopting a passive stance with regards to Malaysia’s future,” says Loh.

While the final submission, Farid Out At Sea by Jaymee Goh, is perhaps the most intriguing and definitely most suspenseful entry of the group.

Bathman says this pilot project, which was launched in Kuala Lumpur last month, is available for viewing online and he hopes it can be used to encourage more future projects of the same theme.

“I hope that the project in its current form will serve as a template for future projects in which futures thinking could be adopted for other topics or settings.

“There are also plans to do more exploratory talks with other communities, universities and organisations to tap into the potential of this creative and exploratory process,” he adds.