In a serene studio filled with birdsong, Omar Ba takes off his shoes and gets down on his hands and knees. Then the renowned Senegalese artist begins to paint a 5m-long canvas a deep, dark shade of black.

This is how Ba, a rising star in the world of contemporary African art, starts most of his works, which question the state of the world and Africa's place in it.

"On black backgrounds, I feel that the drawing will be much more readable and clear for me," he said from his airy workspace at the end of a pathway strewn with shells from the nearby Lac Rose.

"I feel in perfect union with what I am doing because I find myself in front of this colour, which I find noble and magnificent." 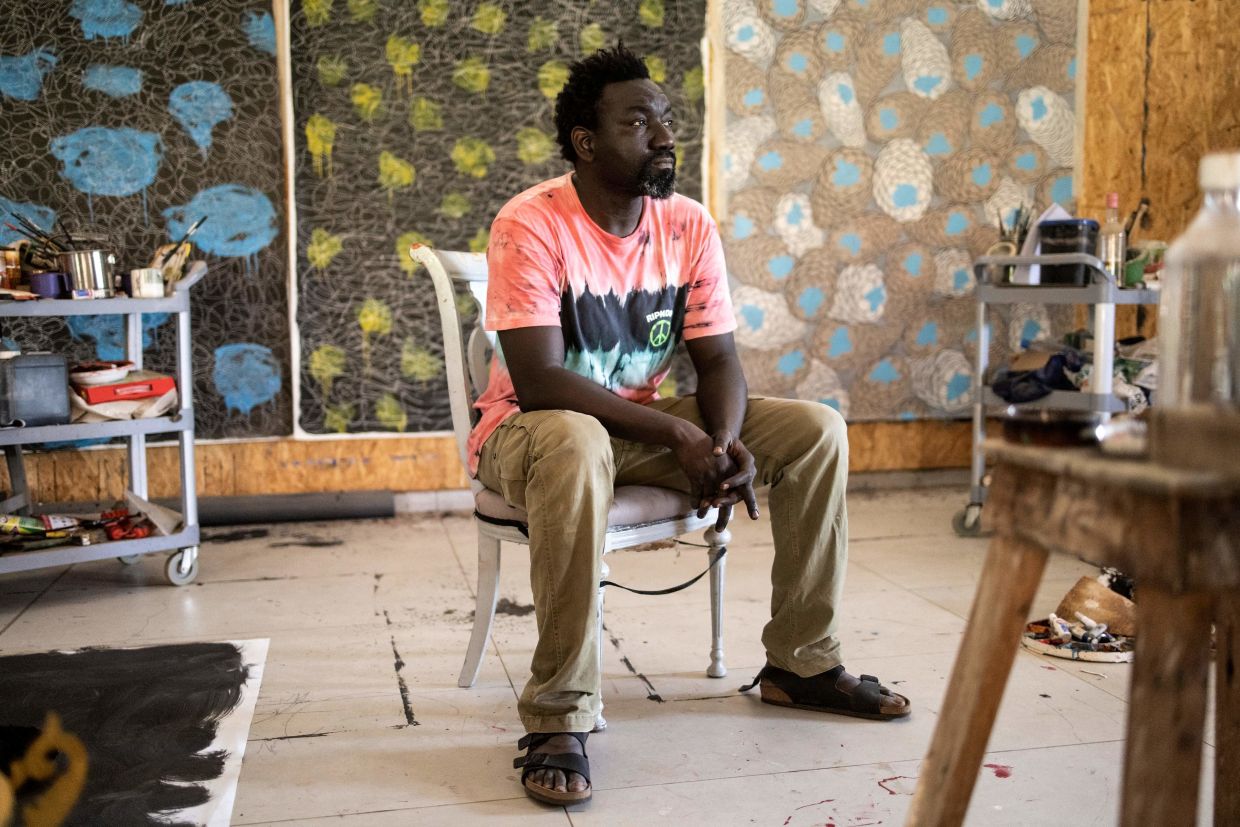 'We must try to make Africa an essential place for art,' says Ba. Photo: AFP

Ba, 45, is a top sensation at the 14th Dakar Biennale, which opened recently. His work touches on colonialism, violence, but also hope.

"We see the colour white as the neutral colour, the pure colour, the innocent colour," he said. "Black is always associated with what is dirty, what is dark ... and that can affect the person who lives these cliches."

Ba has 20 pieces currently on display at the Royal Museums of Fine Arts of Belgium, and an exhibition opening in New York in September. In November, the Baltimore Museum of Art will host a retrospective of his work.

Enigmatic, even hallucinatory, and intensely poetic, his work is inhabited by dream-like visions with shimmering colours and hybrid creatures with the head of a goat, a ram or Horus, the falcon-headed Egyptian deity.

"These characters are half-man, half-animal," he said. "It is a nod to the natural within the human being, who I think behaves like an animal in the jungle - we try to dominate others to be able to exist."

'On black backgrounds, I feel that the drawing will be much more readable and clear for me,' says Ba. Photo: AFP

In his 2021 Anomalies exhibition in Brussels, Ba painted imaginary heads of state with their hands resting on a book symbolising a constitution, a way to castigate the slew of African leaders who have recently modified constitutions in order to stay in power.

"We see that Africa wants to go elsewhere, wants to move," he said. "There are wars, overthrown heads of state, dictatorships ... the African artist should not remain indifferent to what happens in this continent - we must try to see what we can do to build, pacify and give hope."

Currently, Ba says he is focused on solutions, a theme apparent in his biennale exhibit.

One of his festival pieces features two figures with trophies for necks standing on an enormous globe and shaking hands. They are surrounded by laurel branches, symbolising peace.

The biennale, hosted in his home country for more than three decades, holds special significance for Ba. It was in Dakar where, after abandoning training to be a mechanic, he switched to art studies.

Since his first exhibition in Switzerland in 2010, Ba, who now lives between Senegal, Brussels and Geneva, has also exhibited at the Centre Pompidou in Paris.

For the past few years, he has worked from the peace and quiet of his Bambilor studio, in the middle of a mango plantation, an hour's drive from Dakar, sharing the land with cows, ducks and exotic flowers.

"It is an innovative and powerful work that we are not used to seeing in terms of the technique he uses, the materials he uses and the composition and arrangement." Highly sought-after by collectors, Ba is represented by the Templon Gallery, which has previously exhibited Jean-Michel Basquiat, Cesar and Andy Warhol.

"His work is much more complex than most things you see - his treatment of subject matter, his use of bestiary and colour are strikingly strong and beautiful," said gallerist Mathieu Templon.

"He is one of the African artists with the most aesthetic and political work."

Ba's work has featured in the Louvre Abu Dhabi's permanent collection and the Louis Vuitton Foundation for the Contemporary Art's collection.

Speaking ahead of the biennale, the continent's largest contemporary art event, Ba said he was pleased to see young African artists "beginning to enter very large galleries and exhibit in museums that are recognised internationally."

"We must try to make Africa an essential place for art," he said. - AFP