Netizens have caught the royal bug on social media following Sultan of Selangor, Sultan Sharafuddin Idris Shah's decision to buy a cheeky artwork set in the Malaysian Parliament with a roomful of primates and frogs as its members. The post by the Selangor Royal Office Instagram account has garnered 26,000 likes in the last few hours.

The colourful painting also shows a man closely resembling Dewan Rakyat Speaker Tan Sri Azhar Azizan Harun. In a packed Parliament session, both the primates and frogs appeared to be creating a ruckus.

According to the post, Sultan Sharafuddin intends to hang the artwork in his private study room and hopes to auction off the painting and channel the proceeds towards charity.

"Sultan Sharafuddin Idris Shah, Sultan of Selangor bought this painting and intends to put it up for auction with proceeds going to charity. Might put in a bid myself... does anybody know who is the artist of this painting?" Harith also wrote on Twitter. Indie rock musician Herri Hamid commented on Facebook: "It would be good if we could hang this painting in every government agency... to reflect the true situation."

Fergana Art founder Jaafar Ismail posted on his Facebook page, “Asking Why: 1. Monkeys become lawmakers. Perhaps their habitat has been deforested, and nothing is left, hence foraging in the august chamber.

"2. Don't ask about who are the folks that may well be instrumental in deforestation. The painting is OK la. Derivative of a Banksy,” he added.

Jaafar was referring to the 2009 painting by Banksy called Devolved Parliament, which replaced British politicians in the House of Commons with primates. 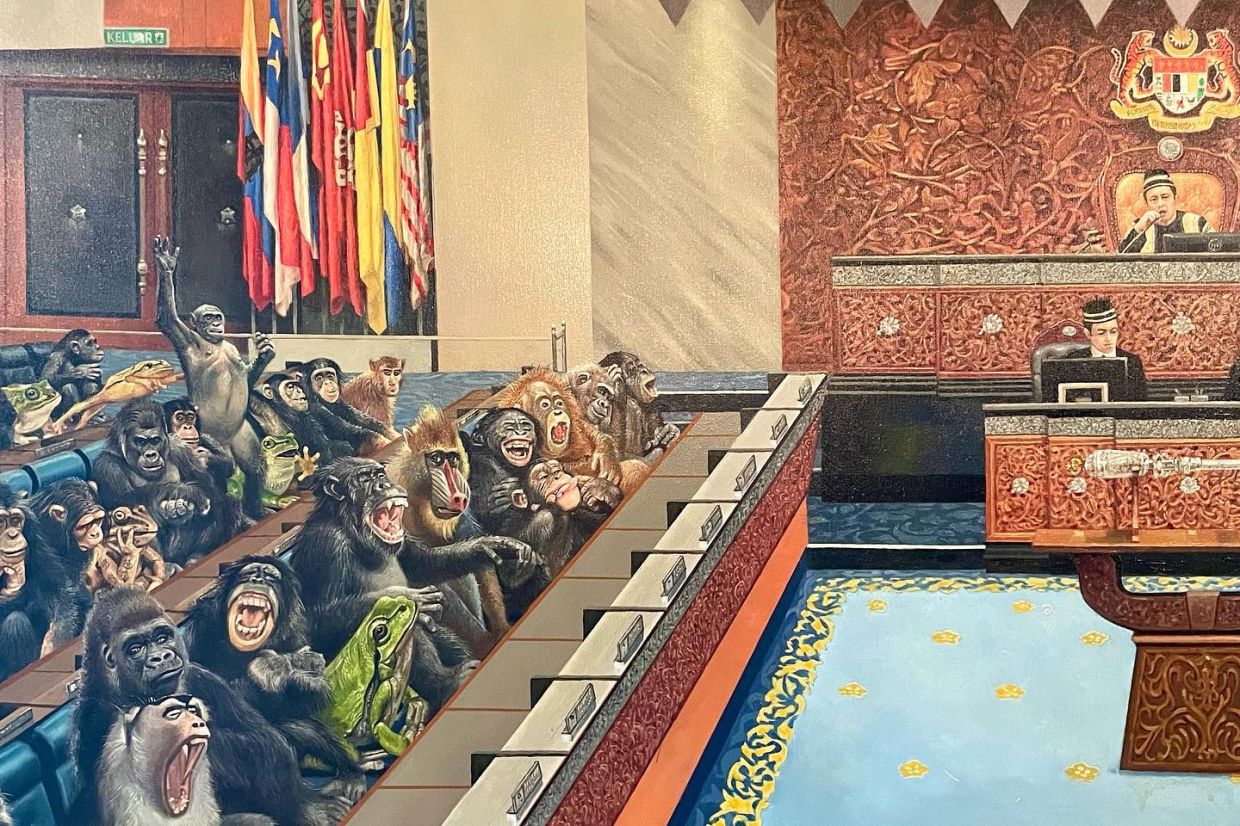 Klang’s member of Parliament Charles Santiago wrote on his Facebook page: “Jokes aside, a bitingly satirical piece of art like this brings awareness to our current state of affairs and increases political engagement.

"It reminds me of Banksy’s Devolved Parliament, which was auctioned off for £9.9mil and since Selangor Royal Office intends to auction it for charity, I am sure one can take a joke for a good cause,” he added. Another Instagram user @redzhazani wrote, “Daulat tuanku... it looks like tuanku understands well what’s in the hearts of the people...” while @mdsfrismail commented, “Cynical but yet politicians will never understand because they are truly monkeys and frogs...”

Facebook user Amila Kamarudin commented on the the Selangor Royal Office’s Facebook post, which has more than 4,000 likes, “A serious message is being delivered by our beloved Sultan of Selangor to all politicians who have full mandate from the Rakyat but behaving like... photo speaks a thousand words!”

Many Netizens have also urged the Selangor Ruler to create a digital art and NFT series using elements from the painting.

At press time, the artist behind the painting has not been identified.