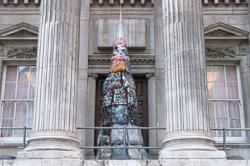 The Lord Mayor of the City of London has installed a different kind of Christmas tree on his balcony to raise awareness of the over-consumption typically associated with the end-of-year celebrations.

Far from being disgusting or messy, the whole thing is meticulously held together by a giant mesh structure, creating a colourful sculpture. But up close, there is no doubt - this particular tree is adorned with trash rather than the usual baubles and garlands. From plastic bottles to cans, used sunglasses, pieces of paper, sim cards and phone cables, each section is composed of a specific type of garbage.

Designed in collaboration with the Irish artist Áinne Burke, this very special tree was installed on the street side balcony of Mansion House in the heart of London's financial district. The waste used was collected by street cleansers and waste management companies.

The idea is as original as it is festive, but it also has a serious message, since the initiative aims to raise awareness about the amount of waste generated during the festive season. - AFP 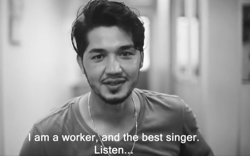