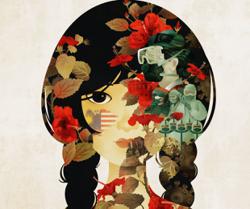 In his stamp, Worl depicts Raven just as he escapes from his human family and begins to transform back into his bird form. Raven plays an essential role in traditional tales of the creation of the world, when Raven sets free the sun, moon and stars. Photo: US Postal Service

Alaska Native artist Rico Worl said he jumped at the chance to create for the US Postal Service a stamp he hopes will be a gateway for people to learn about his Tlingit culture.

A ceremony marking the release of Worl's "Raven Story" stamp is set for Friday in Juneau, where Worl lives.

"I think a lot of people already are learning that there’s a lot more richness in authentic work, and authentic work from Indigenous people and the stories that are there,” he said.

Worl said his Twitter following exploded from five to more than 8,000 after he shared the Postal Service's tweet highlighting the stamp announcement earlier this month, with his own quote tweet adding: "I did a thing.”

People seem excited, he said. "They know it's something different, and they want to be a part of that.”

Raven, a trickster or transformer, is a key figure in Tlingit culture. Worl described as an influence for the stamp a story in which Raven discovers that a clan leader had in his possession the sun, moon and stars. Raven assumed human form to share those items with the world. The stars were in the last box Raven opened.

In a statement, Worl said he wanted to showcase "a bit of drama,” with Raven trying to hold onto as many stars as possible while transforming back into bird form during a frenzied escape.

The Sealaska Heritage Institute, which is hosting the unveiling, said this is the first stamp by a Tlingit artist. The Postal Service said it plans to feature the story behind the stamp on social media.

Antonio Alcalá, an art director for the Postal Service who worked with Worl on the stamp, said he became aware of Worl's work while at a gift shop at the National Museum of the American Indian in Washington, DC. The shop carried work by Worl and his sister, Crystal Worl, through their Trickster Co. Alcalá said a basketball stood out.

"There are many typical types of books, art, and crafts on display in the gift shops of museums presenting American Indian history and culture. But this was the first time I saw a basketball. The fact that it featured a piece of formline art seemed incongruous at first and also very cool,” said Alcalá, who noted he's "always looking for visually appealing artwork."

He remembered the ball being credited to Trickster Co., and looked up the business when he was looking for an artist for the stamp.

Worl, who is Tlingit and Athabascan, has a background in anthropology and considers himself a social designer, who uses design to address societal concerns. One of the first products he designed were playing cards, which Worl said was in response to concerns about seeing a tourism market for Native-inspired art not produced by Native artists.

"It was me, experimenting, how can we, as Indigenous artists, break into this economy?” he said.

"I think there’s a growing demand for authenticity in the world. But at the same time not everyone can afford that.” For some people, he said, a deck of cards "is a lot more accessible.”

He said he likes to infuse modern, traditional and playful touches in his work. He cites Trickster's basketballs, with traditional formline designs, as a way for members of the Native community to "represent who they are” in a light-hearted way.

Art directors can work with photographers, designers, artists or others to bring a stamp from concept to final design. Final designs undergo a legal review and, once cleared, advance to the postmaster general for the last stamp of approval.

David Rupert, a Postal Service spokesperson, said 18 million Raven Story stamps are being produced. He said a stamp unveiling, like the one set for Friday, is meant to be a "momentous occasion.”

Other stamps announced by the Postal Service for this year include those celebrating flowers, the late nuclear physicist Chien-Shiung Wu, Japanese American soldiers of World War II, lighthouses, the 200-year anniversary of Missouri statehood, America's "love of coffee” and barns.

"We look at stamps as often little pieces of art, really, and they represent America,” Rupert said, adding later: "We want to celebrate America and all the great things about it.” - AP