Classical music and football showed yet again how they can lift spirits in these pandemic times.

Bocelli sang as fireworks went off in the background and 24 large helium balloons floated above the field, simultaneously forming a single bunch as a symbol of unity and spirit.

The epic Nessun dorma has been a sports and pop culture hit since Luciano Pavarotti made it widely known after performing it at the 1990 World Cup.

“It will be a pleasure and an honour to be able to offer my voice at the opening ceremony of Uefa Euro 2020, in the spotlight of the Olympic Stadium in Rome," said Bocelli in an earlier statement surrounding his live performance.

“It will also be a precious opportunity to send a strong message of hope and positivity. That Vincerò (I will win), underlined by the high register and ideally sung by all 24 national teams involved, will also serve as a wish for everyone in the world, overcoming difficulties and tackling challenges in their own games: in other words, always winning, ” he added.

At the height of the pandemic last year, Bocelli's poignant concert from an empty Milan cathedral smashed records to become the biggest classical live stream in YouTube history. 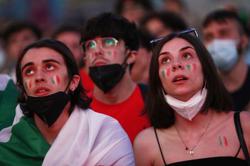