A screen shot of the 'Anthology Of Metaverses 1.0' exhibition, which features digital art from regional artists. Photo: AOM

Initially conceived as a response to the pandemic, Anthology Of Metaverses (AOM) has evolved into an exploration into the digital sphere as a space where artists can explore and create.

Its inaugural exhibition, AOM 1.0, which runs until April 24, is a real trip for anyone who’s new to Net-art, or art that uses the Internet as its primary medium. This project is supported by Malaysia's Cultural Economy Development Agency (Cendana).

James Ly, co-founder, project manager and curator, says that AOM expresses an urgency to explore how technology is changing the world we live in, including how we produce and consume art, which has been accelerated by the global Covid-19 pandemic.

Recently the global art industry was shaken up by blockbuster sale of Everydays: The First 5000 Days by US digital artist Beeple.

His digital collage sold on March 11 for a record US$69.3mil (RM285mil) at Christie’s auctioneers, as virtual art rapidly establishes itself as a new – and highly profitable – creative genre.

Everydays: The First 5,000 Days became the most expensive ever “non-fungible token” (NFT) – a collectible digital asset that uses blockchain technology to turn virtual work into a unique item.

Sotheby’s is hoping to generate the same interest with its upcoming NFT collaboration with Pak, an anonymous digital artist.

In Malaysia, digital art isn’t on such mainstream levels yet but the interest has to start from experimental collaborations, especially in this pandemic era.

“Digital, virtual and telecommunication technologies have become so much a part of our everyday lives that it has become necessary for us to explore that space, and the possibilities and limitations it presents in the realm of artistic production and cultural activities, ” says Ly during a recent Zoom interview, along with the AOM team of Amanda Ariawan (co-founder/curator), Rimbawan Gerilya (co-curator and digital artist) and Ian Yong (coding/web-development).

Featuring 20 individuals and collectives who explore the digital and/or the Internet as their mediums of expression, AOM 1.0 is the result of a process of identifying exemplary works of digital and Internet art from the South-East Asian and South Asian regions. Through works that signify shifting formal and aesthetic standards, AOM 1.0 taps into the idea of a space providing the possibility of movement in all directions. 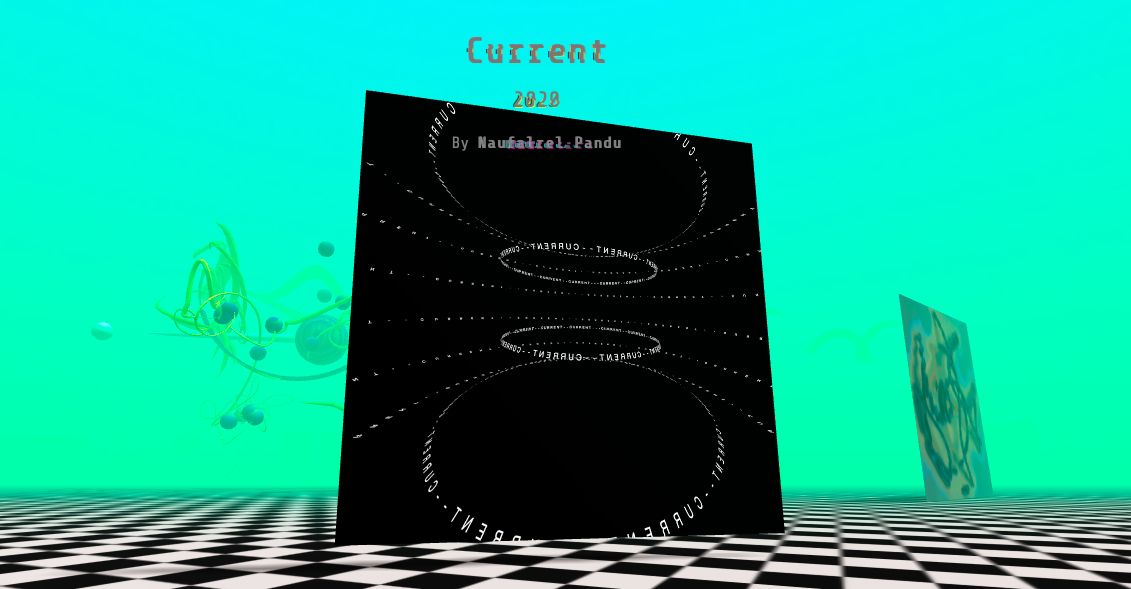 An image of digital artist Naufalrel Pandu’s 'Current' (2020), which is part of the 'Anthology Of Metaverses 1.0' virtual exhibition. Photo: AOM

The artists’ profiles as well as their artwork descriptors can be viewed on anthologyofmetaverses.com. Here, users can also directly access the show through any desktop, smartphone, and touchscreen device.

Beyond the gallery space

The AOM team is excited about the potential of unearthing digital artists out there who are confined to their own silos be it video game artists, motion graphic artists or CG artists and rarely go after their own creative pursuits.

“From the featured works, we see how artists are adapting to new conditions presented by technology in the use of art making and it shows us how adaptive human beings are in general to new environments, ” explains Ly.

Interestingly, the team itself has also had to adapt and explore. Save for a couple of real-life meet-ups between Ly and Amanda, who both work in the Kuala Lumpur art/curating circles, the rest of them met online, and consolidated their individual skills to spark this new venture for artists in the region. The team has been working together remotely from Malaysia and Indonesia (where Rimba is based) to design the space and curate the show.

If not for the pandemic, they admit that they probably wouldn’t have veered in this direction so soon.

“Because of Covid-19, many of my shows got cancelled and plans had to change. Amanda and I got to talking about digital art, and I had always been really interested in post-Internet art (for the clueless, this is a term like post-modernism), as an extension of pop culture, ” says Ly, who graduated with a BA in multimedia design and a MSC in 3D animation from RMIT (Australia) and Dundee University (UK).

“With the pandemic and movement control orders in force, this was an interesting way for me to reconnect with digital art. I had left multimedia design since graduating about 10 years ago, and had become so much more involved in contemporary art.

“But now the whole multimedia aspect was sort of coming back into focus, and there was a synthesis of sorts with what’s happening in the real world, and also what’s going on in the tech world. Everything is so much more accessible these days. It has been a really interesting process, looking for artists and learning more about this virtual space, which is almost like another reality, ” he adds.

World with no borders

Since he was working from home a lot, Ly had more time to spend on screen.

“You have access to a lot more material these days, from your own home. You can travel the world through the Internet, and that really sparked this whole idea to create a new space, with no physical constraints, which incidentally was a major hurdle when I was running a physical gallery, because you have budget issues, visa issues and the like when transporting works of art, ” says Ly, who used to run the Minut Init Galleria in Petaling Jaya. “In the virtual world things are much freer. You have more options to play with.”

Created with WebGL, the virtual gallery places you in an open world without walls, in which you wander about alone, beckoned by distant images.

Rimba (aka Tri Hartono) is the Indonesian digital/3D artist who came up with the “magic”, as Ly calls it.

“At the beginning of the pandemic I had been experimenting with some free architectural rendering software from Unreal Engine, ” shares Rimba.

“I tried it out and got hooked. So when James and Amanda approached me with this idea of making a virtual gallery, it totally fit with what I was learning at the time and for me, it’s always better to experiment when you have a purpose. So I made a prototype, and that was a great stepping stone to what is now the AOM.”

Rimba says the extra free time during the pandemic afforded him the space and an excuse to explore and work with new stuff.

“I work in the event industry and it’s totally dry at the moment. Because of the scarcity of jobs, I was able to explore and express my artistic side, instead of just doing commercial work, and it has brought me a lot of new insights. It has been wonderful actually.”

Rimba was recruited into the team by Amanda, who shares: “James and I had zero knowledge about virtual spaces, and we knew we needed others onboard. I had been following Rimba’s work from even before the pandemic, so after some early testing of the prototype he created, we thought it would be great to team up. Soon after, we got Ian (the aspiring web developer) onboard too.”

“Personally, I am pretty much online all the time these days, not just for work, but also with my social life. I think it’s really a great time to look at net-art, while everyone’s attention is on their screens.”

Amanda, a gallery associate, curator and art writer who obtained her Master’s in Contemporary Art Exhibition Production from the University of Lille, is banking on social media promotions to get the word out about AOM.

“We’ve been trying to work with other online collectives on what Rimba calls ‘spin-offs’, or activities to keep things exciting like an afterparty at a virtual club, and a game, ” she says.

‘It has been a really interesting process, looking for artists and learning more about this virtual space, which is almost like another reality,’ says Ly. Photo: AOM

“The residency is a way to help artists, to commission more works, and for our site to be able to curate their works in future. A lot of artists can create great visuals but aren’t clued-in when it comes to curating, ” says Ly.

“The residency programme will also help artists during the pandemic, as they are unable to travel to participate in other residencies. Here again, digital has provided a solution, ” he concludes.