An exhibit of European and Asian porcelain from 1500 to 1900 at the Frick Collection's new museum location on Madison Avenue in New York. Photo: Bloomberg

For the last 100 years, stepping into the exquisitely preserved rooms of the Frick Collection’s mansion on New York’s Fifth Avenue was like entering a gilded time capsule.

It was both the draw of the museum, which is largely unchanged since it opened in 1935, and a flaw: Taken all at once, many of the spectacular bronzes, delicate Sèvres porcelain, and even masterpieces by Goya and Rembrandt drifted uncomfortably close to decoration, the collection’s many superlative parts subsumed into a larger, sumptuous whole.

"That’s the point of a house (museum), ” says the Frick’s deputy director and chief curator Xavier Salomon. "It’s wonderful in one way, and then in other ways it’s a constraint.”

For the next two years, though, that constraint has been lifted while the mansion is expanded. During that time, the collection has moved a few blocks away into the former Whitney Museum of American Art’s building on Madison Avenue and 75th St. (When the Whitney moved downtown it leased the space to the Metropolitan Museum of Art, which dubbed it the Met Breuer; the Met then broke its lease early as a result of budget constraints.)

Whereas the Frick normally exhibits 470 objects, in the new space, dubbed the Frick Madison, just 300 will be on view. And in contrast to the Frick’s plush interiors, the walls of its temporary home have just four shades of grey. Gone, in other words, are any distractions from the art.

The result is staggering.

"What I hope is that people who know the museum well at One East 70th Street will come here and rediscover things, ” says Salomon.

"They will realise that they’ve never looked at things properly; they will literally see them under a new light, in very different juxtapositions.”

The collection will open to the public on March 18; advance reservations are required.

The Frick Madison’s exhibition space covers all three of the floors of the building.

"On each floor, you always start by encountering a three-dimensional object, ” says Salomon. He initially wanted the pedestals to be concrete," which is actually impossible to do because of their weight and a number of other things.” Instead,"these are stuccoed to look like concrete, ” he reveals.

The Frick Madison is designed as a one-way tour through the collection (visitors move counterclockwise), as opposed to a more free-flowing space where people can wander forward and back.

As a result, the Frick curatorial staff paid close attention to transitions from room to room, carefully staging every view. Annabelle Selldorf, the architect who designed the Frick mansion’s expansion, consulted with curators on the use of space.

"If you go backwards, ” Salomon says,"you’re going to encounter a lot of blank walls.”

The floors are broken up by chronology and artistic school. "Which is the most boring way, in a way, ” Salomon says. "That’s what most museums do, but we had never done it. By doing that, you can actually get a sense of what the strengths of the collection are.”

The Holbeins are in a room on the second floor with early Netherlandish art; next is a room of Dutch art, which leads to Rembrandt.

The images in the all-Rembrandt room are usually, Salomon says,"all together in the (Frick mansion’s) West Gallery. You see them with a lot of other things, but the possibility of seeing them individually, focusing on each one of them, is something that’s never really happened before, ” he says. "That is hugely exciting.”

"We went slightly backwards, ” says Salomon of that strategy. "Usually, you have a building, and then you have to put art in the rooms. But here, we created the rooms around the groups of paintings we wanted to display in each space.”

Visitors will note the complete absence of wall text and labels in the galleries. The name of the artist is on the frame. For any other context, visitors will need to refer to the audio guide or the visitor booklet.

Likewise, there are no stanchions or barriers and only a handful of vitrines, meaning visitors can get within a hairsbreadth of the priceless objects on view.

Asked if organisers were worried about visitors getting too close, Salomon notes that "we have very fierce guards.”

The Bellini is in a room by itself, for example, in a chapellike setting, Salomon says.

"The Bellini is the greatest work of art in the collection, and we wanted this one (to be) by itself, with nothing else.”

Previously, the painting hung behind furniture; now, visitors can admire it without any visual interruption.

"Bronzes are all over the Frick, ” says Salomon. "On every shelf, on every table, which makes them totally invisible, basically. So what we decided to do is force people to look at bronzes, so you have a room where it’s just the material of bronze.”

Most of the works are Italian, but there are a few Northern European objects as well.

"There are moments that are really by chance, but which I really like, ” says Salomon. "You have Goya’s Forge with the metalworkers, and then you see the bronzes” on the periphery.

All nine Spanish paintings acquired by Frick in his lifetime are on view.

"The fourth floor is dedicated to France and Britain, ” says Salomon. Why? It has double-height ceilings. "Most of our French and British pictures are much taller than the others.”

In the Frick, the porcelain usually is set on top of furniture; in the Madison Avenue building, though, curators felt that that would be too houselike, so they set the porcelain on floating displays instead.

This vase, which is called the vase japon but has nothing to do with Japan, is based on a book of woodcuts from the Chinese imperial collection gifted to the Sèvres manufactory by the emperor of China. One vase was sent to the emperor as a gift, two were purchased by the Louvre Abu Dhabi, and the last is owned by the Frick.

The gold chains, Salomon says, were made by the goldsmith who, at the time, was making jewellery for Marie Antoinette.

Initially, Salomon says, his colleagues resisted a minimalist hang. But after a trip to Donald Judd’s Chinati Foundation in Marfa, Texas, where they could see the beauty of a single object in a massive room,"they all came back totally converted. It kind of got to this point where I was like, ‘We have 10 things? Let’s make it five. Let’s make it two. We started slashing everything.”

"I think we’ve used this line many times before, and it’s supercheesy, but it’s true, ” says Salomon. "It is a collection of masterpieces, so we can really afford to have a lot of works individually on walls, because they hold those walls so well.”

"So Fragonard does these four paintings for Madame du Barry (the last mistress of Louis XV) in the 1770s, ” explains Salomon. "They’re installed in her pavilion outside of Paris, and she hates them. They get rejected, she sends them back to Fragonard, and then he keeps them in his studio for 20 years.”

While these panels in the Frick’s normal Fragonard room are "put in the wrong order, ” says Salomon, organisers created a room that’s roughly the same size as the original pavilion-the window in the Madison Avenue building is in roughly the same place as an original window-and arranged them in the correct order here.

"You can get very close to it” now, Salomon says. "The flowers are unbelievable, the way they’re painted.”

"This is a place where you can come and just do one floor, if you want,” says Salomon. "You can focus just on French art, and then come back another day for Italian art or whatever.”

"That sort of contemplative experience with the works of art was something that did happen at the house, ” he continues,"but I think here happens in a different way.” - Bloomberg 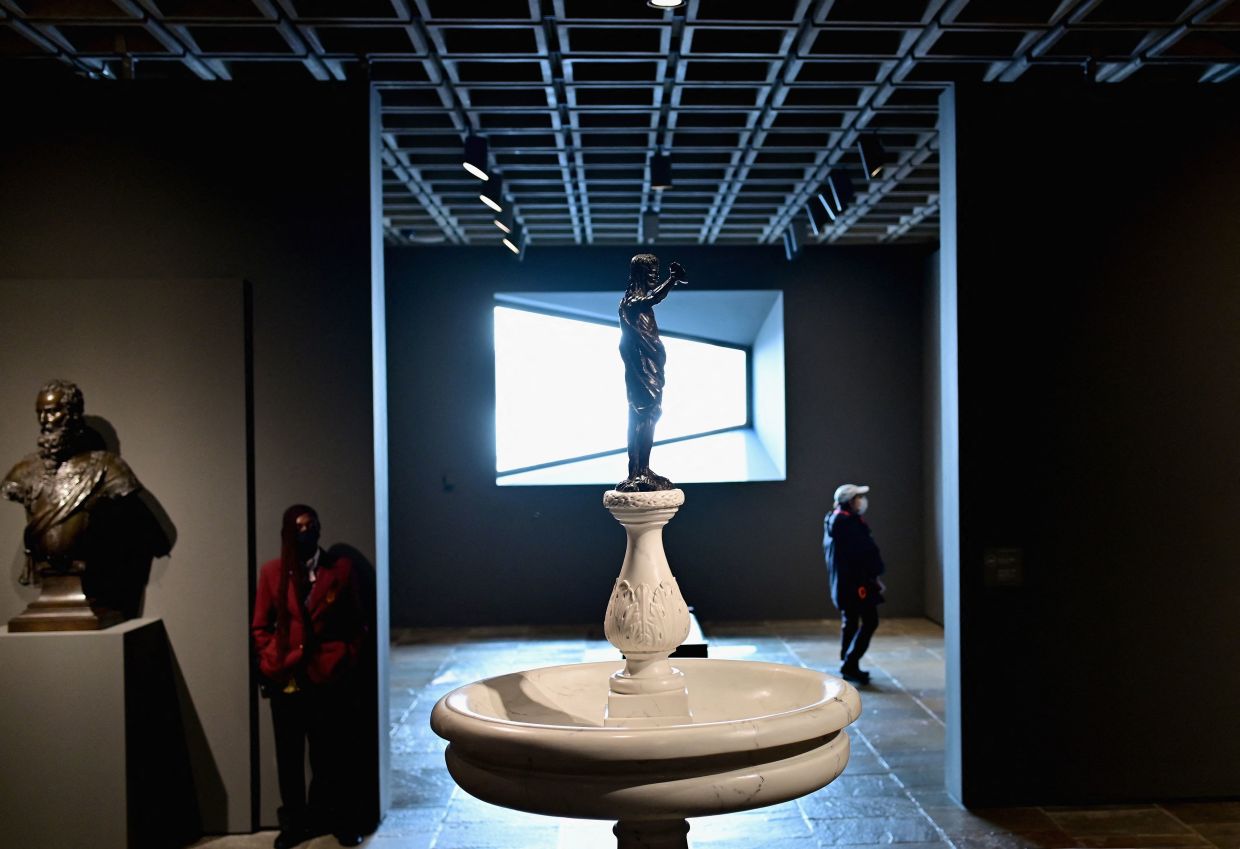 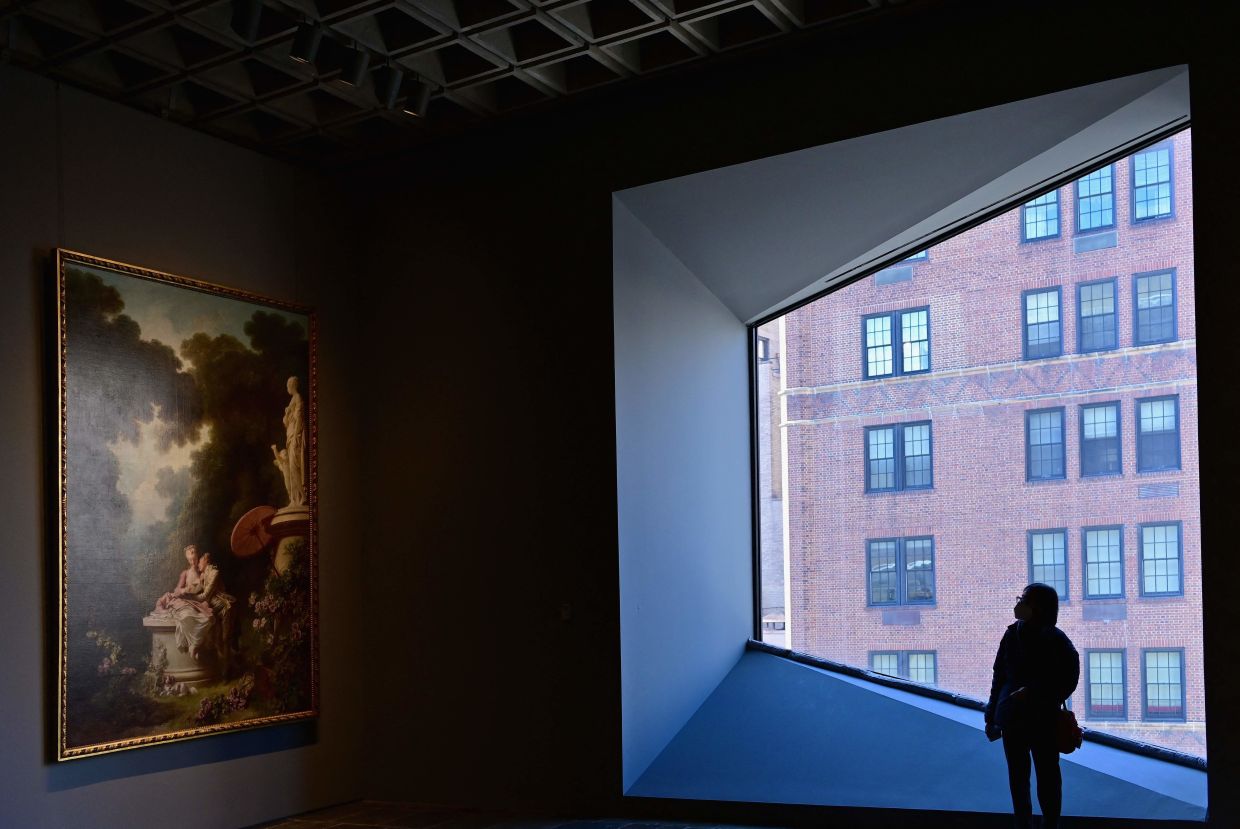 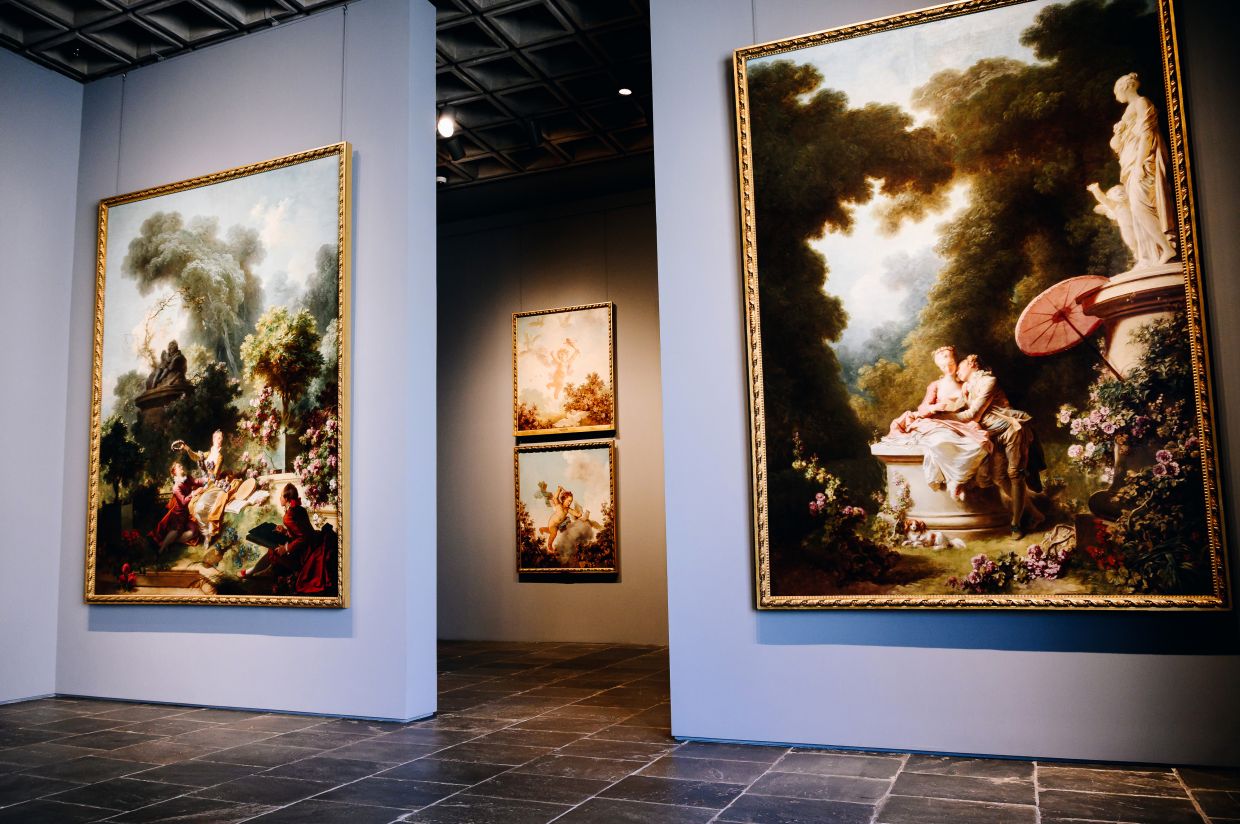 An exhibit of European and Asian porcelain from 1500 to 1900 at the Frick Collection's new museum location on Madison Avenue in New York. Photo: Bloomberg

A person looks at her phone next to Jean Barbet's 'Angel' during the Frick Collection opening preview at Frick Madison, the Marcel Breuer building in New York. Photo: AFP

A visitor looks at a painting during the Frick Collection opening preview at Frick Madison, the Marcel Breuer building, New York. Photo: AFP