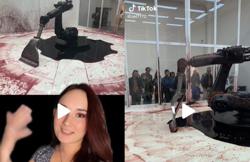 Ali explaining a work to a visitor at his 'Project A: Last Man Standing (Project A)' exhibition at the National Art Gallery in Kuala Lumpur. The exhibition, featuring 18 artworks, sees Ali revisiting a long-standing series of large works inspired by Italian masters. Photo: Bernama

Contemporary artist Ali Nurazmal Yusoff’s Project A: Last Man Standing (Project A) is one of the first new exhibitions to grace the National Art Gallery (NAG) in Kuala Lumpur since it reopened on June 23.

The exhibition, featuring 18 artworks, sees Ali revisiting a long-standing series of large works tied to realism, with humour, satire and politics thrown in.

This show was originally scheduled to run in late March at NAG, but it had to be postponed after the movement control order (MCO) came into effect in Malaysia.

“This exhibition gathers a narrative of my career as an artist and individual," says Ali, 42, who has been painting for over 25 years.

The Penang-born artist, who now works from his Alism Art Studio in Subang Jaya, Selangor, adds that Project A took nearly two years to put together. In total, the show features 13 older works (loaned from collectors) from his Imitation Master series, and five new works, including Nasi Lemak Spaghetti, Makcik Bawang, A-Road, Patriotisus and Legacy. 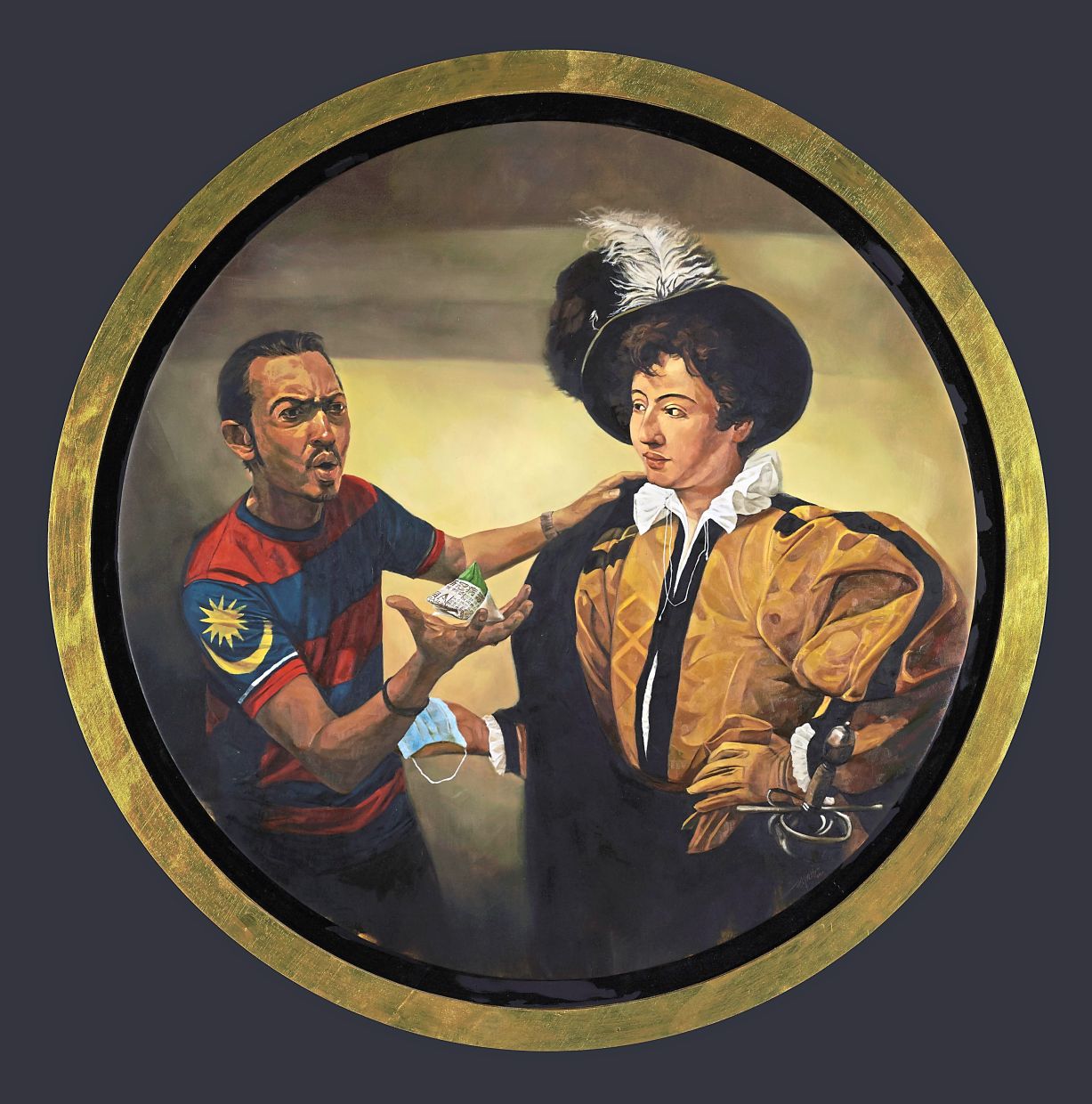 "Almost by fate, I had opened a book about Caravaggio and the first painting that struck me was Cardsharps. I fell in love with the image without knowing much about it. I felt an immediate connection, thanks to Caravaggio’s use of striped clothes, cheeky expressions ... that instinctively 'conversed' with the clownish world of my previous paintings. I wanted to portray myself inside the composition ... I wanted to be a contemporary eyewitness to the scene, grinning at the irony of the situation, wanting to be a bit of a magician, and denouncing the fraud at the same time," recalls Ali, a UiTM fine art graduate.

"I have spent more than 10 years with these paintings, studying Caravaggio’s characters and details while adding in modern day elements," he adds.

Ali mentions that Caravaggio’s strong chiaroscuro technique (contrasts between light and dark) helped him to overcome the initial technical difficulty when merging East and West worlds, old and new themes.

"It allowed me to further explore every part of the painting, where even the shadows are alive and full of details," he says.

Throughout Project A, the visitor can experience Ali’s cheeky, irreverent and "pointed" contemporary Malaysian views added into these Baroque and Renaissance-era paintings.

One such example is Ali’s Imitation Master - Nasi Lemak Spaghetti (2020) oil painting based on Caravaggio’s The Fortune Teller, where he has inserted himself in the painting, wearing a T-shirt with the national flag and holding a pack of nasi lemak.

"The Fortune Teller painting implies that cheating is wrong and warns the viewer not to be taken in by false promises. In Imitation Master - Nasi Lemak Spaghetti instead of the gypsy reading the palm while skillfully removing the ring from his finger, I am now in the company of the youth with the sword and gloves," says Ali. 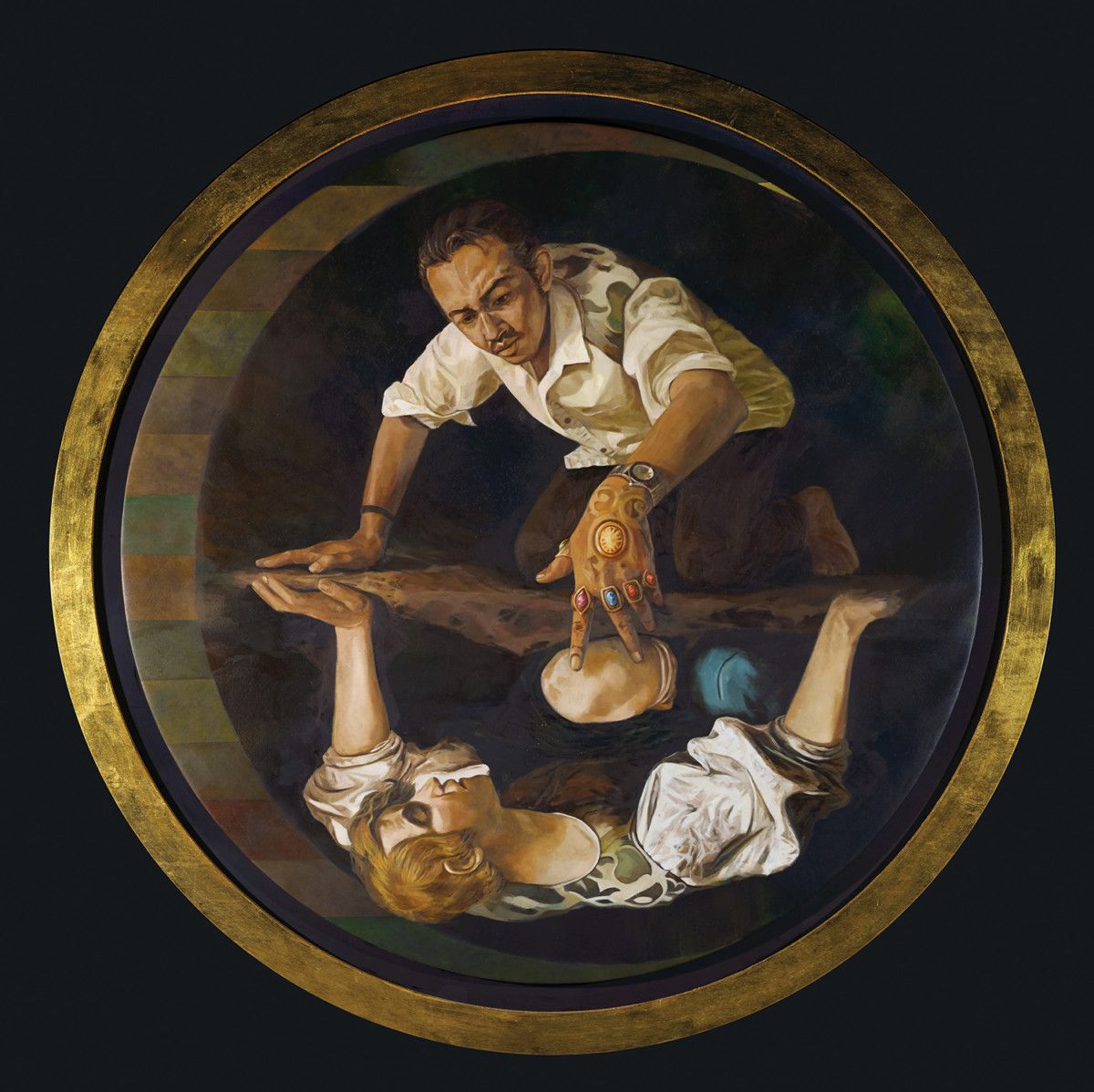 Another painting by Caravaggio entitled Narcissus is the inspiration behind Ali's Imitation Master - Patriotisus, a new work with his self-portrait as a prominent addition. The use of gemstone rings and luxury watch in the image can be interpreted in many ways.

"The water’s liquid surface is depicted as a modern polished mirror here. I do not gaze at my reflection, like how Narcissus did.

"Instead, I observed intensely in the direction of my extended left index finger – beyond ‘narcissism’, to the future of my country, echoing the hopes of those who have a deep love for the land and culture," he concludes. 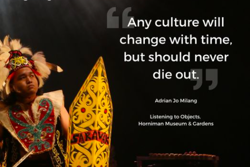 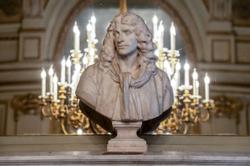