Americans have long adored things from France, like its bread, cheese and wine. But they've been stubbornly resistant to one of France's biggest imports: Asterix.

The bite-sized, brawling hero of a series of treasured comic books is as invisible in America as the Eurovision Song Contest is big in Europe. One US publisher hopes to change that.

Papercutz, which specialises in graphic novels for all ages, is republishing Asterix collections this summer with a new English translation - one specifically geared to American readers.

"Compared to the great success it is worldwide, we have a lot of potential here to explore, ” said Terry Nantier, CEO and publisher of Papercutz, who spent his teenage years in France. "We’re just looking to make this as appealing to an American audience as possible.”

Enter Joe Johnson, a professor of French and Spanish at Clayton State University in Georgia who has translated hundreds of graphic novels and comics. He ignored the existing translation for Britain and went directly to the original French source.

"My driving thing is ‘What do I think a kid will understand?’” Johnson said. "That’s in the back of my mind as I translate it. But still keeping to the spirit of the original.”

They’re set in 50 B.C. in a region of Western Europe almost entirely conquered by the Romans. One small village of Gauls manages to resist, thanks to a special magic formula. The heroes are the wily and tough Asterix and his best friend Obelix, a red-haired giant prone to pratfalls and drinking too much.

Johnson's translations are more streamlined and accessible than its predecessors. In the old books, the Roman camps were "entrenched.” Now, they are "fortified.” In the old, the village leader announced: "And now I declare the revels open!” In the new, he says: "Let the party begin!”

One very American change can be detected just a few panels into the first volume, when Obelisk warns his pal that the Romans will be mad because he keeps beating them up. "Huh!” Asterix replied in the old translation. "Whatever, ” he says in the new.

Goscinny died in 1977 and Uderzo, who died in March, took on both the writing and illustrating for many years. The last three editions of Asterix were written by Jean-Yves Ferri and drawn by Didier Conrad. The latest is The Chieftain's Daughter, released internationally in October 2019.

So far, America seems immune to the series' Gaulish charms, perhaps due to a history of being untouched by the Roman Empire or its citizens not forced to confront Latin, as they do in Europe. 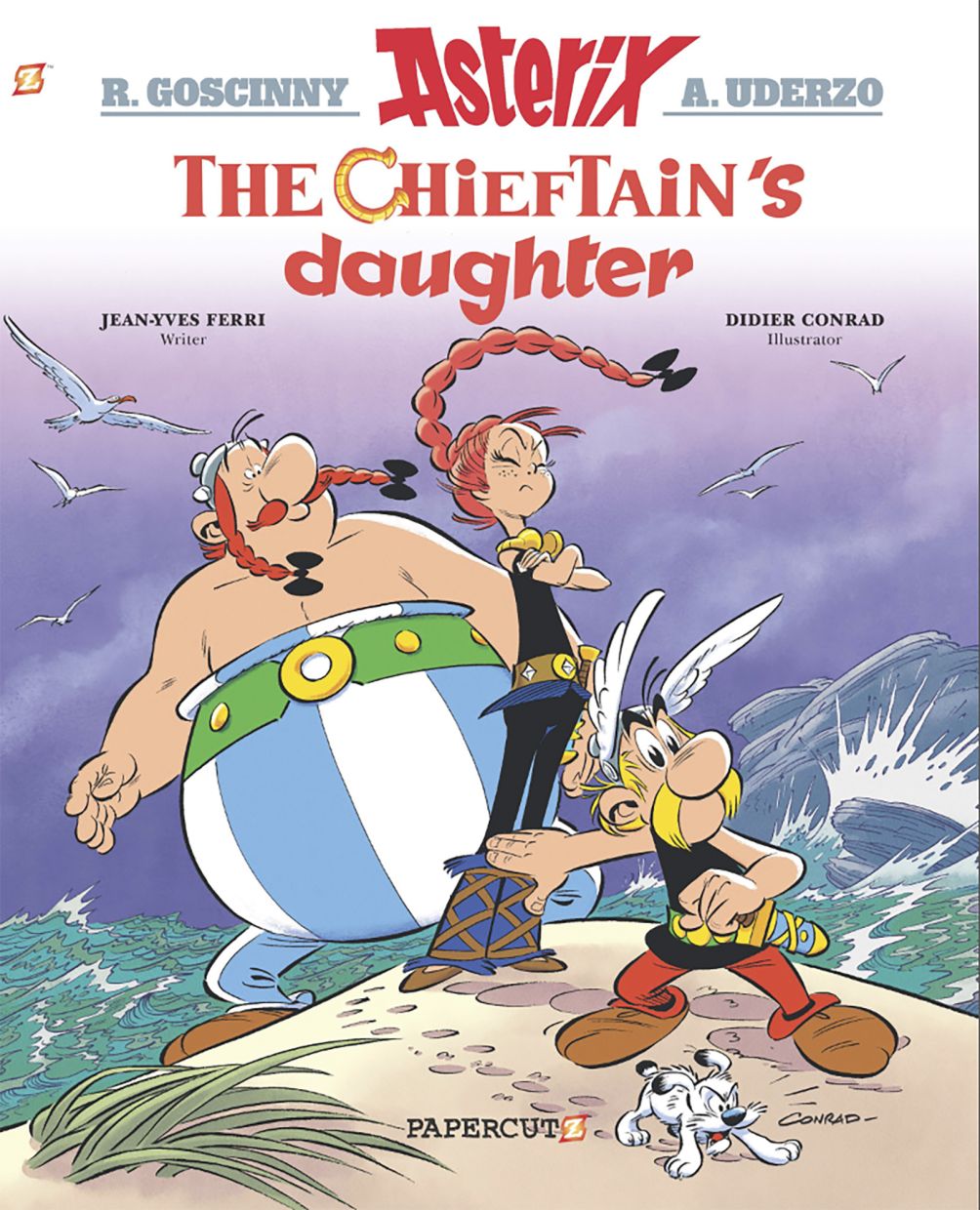 This image released by Papercutz shows the cover image for 'The Chieftain's Daughter,' the latest in the Asterix collection. Papercutz, which specialises in graphic novels for all ages, is republishing 'Asterix' collections this summer with a new English translations - one specifically geared to American readers. Photo: AP

Nantier thinks there is one good reason American kids might enjoy the series: A feisty group of quirky underdogs making an entire empire look foolish. Sound familiar? That's the story of the American colonies' fight for independence from England.

"It is French history, but it’s incredibly successful in Germany and England and many other countries, and in hundreds of languages. It has a universal appeal, ” he said.

The books contain slapstick for the kids and parody for adults. Asterix and Obelisk travel to Egypt, India, Rome and the Olympics, among other places, often mocking the nationalities they meet: The Brits drink warm beer, the Spanish take any opportunity to dance.

Much of the humour is based on French puns of a bygone era, which don’t travel well across borders. The solution has been to tailor each book for different countries, hence the creation of such English character names as Ginantonicus and Crismus Bonus.

Most books contain sly send-ups of popular figures, such as Sean Connery as Agent Dubbelosix in Asterisk And The Black Gold and Elvis Preslix in Asterix And The Normans.

When Asterix visits Cleopatra, adults will chuckle at her resemblance to Elizabeth Taylor, who starred in a 1963 film epic about the Ancient Egyptian leader. (Obelisk, it turns out, is the reason the Sphinx's nose has been lost. It was an accident.)

Johnson's task was of the toughest he's faced: Asterix is very textually driven and pun-heavy, sometimes requiring him to come up with a similar joke to the original or even a new song to replace an outdated one. Even the sound effects are different. When a huge rock landed in the old version it went "Kerplonk!” In the new it goes "Thuddd.”

"Fundamentally, the stories are about friendship. That’s the story that we’re always interested in talking about as a as human beings, ” Johnson said. "It’s a winning formula, I think.”

The series seems less dated than its contemporary Tintin, which often depicted people of colour in racist ways. While the world of Asterix is not immune, the new US volumes remove such horrific images and sticks to the original notion that no one people are better than any other.

"Nobody looks pretty in there. It’s all raucous. The Gauls themselves are portrayed as a brawling lot that can’t get together,” Nantier said. "So nobody comes out of it unscathed. Everybody is skewered happily.” - AP