'For me, chiffon cake is very tied to Singapore and Malaysia and my food memories. Growing up, my siblings and I fought over pandan chiffon cake!' says Chiew about the inspiration behind her new short story, which is available to listen on BBC Radio this month. Photo: Nodesserts

During the pandemic lockdown, a Malaysian-born Singaporean-based author was craving for cake. This became the inspiration for a short story that was recently read on BBC Radio.

The Seductive Properties Of Chiffon Cake by Elaine Chiew, had been specially commissioned for Spice, a series of stories for radio using the idea of "spice" as a theme or starting point. The story was read on BBC Radio on June 28 by London-based Zimbabwean actress Chipo Chung (Doctor Who, Into The Badlands).

Chiew’s story revolves around the character Ching, who returns to Singapore for inspiration after her bakery in Fulham, England runs into trouble. The story is based on old family memories.

“For me, chiffon cake is very tied to Singapore and Malaysia and my food memories. Growing up, my siblings and I fought over pandan chiffon cake! Gula melaka too is distinctive to our region, and and so versatile that chefs use it in different ways, ” says Chiew in a recent interview.

“As I was writing the story, initially I kept circling around the idea of ‘anise’, but this was during lockdown and my craving for cake got the better of me! The shops were out of flour and sugar. I figured if I couldn’t eat cake, I could, at least, write it!” she adds. Singapore-based Chiew hopes to head to Ipoh to work on her new novel once the pandemic travel restrictions are eased up. Photo: Elaine Chiew

The story, which runs for 14 minutes, is the first of Spice’s five episodes.

Chiew was born in Ipoh, and grew up there. She is now a British citizen based in Singapore. She is also a two-time winner of the Bridport Short Story Competition, editor/contributor of Cooked Up: Food Fiction Around the World (2015) and the author of anthology The Heartsick Diaspora (2019).

She says that her short story was commissioned to be part of SPICE after her anthology was released in London. She was approached by Jeremy Osborne, a producer at Sweet Talk Productions, an independent radio company that supplies content to BBC Radio.

“I had recently read and admired The Heartsick Diaspora and was keen to work with Elaine at some point. She seemed like a natural fit for the Spice series. The Seductive Properties Of Chiffon Cake was not only a playful response to the original brief, but a vibrant study of family rivalry, too,” says Osborne via email.

Chiew is delighted about how her first ever story for radio had turned out.

“Chipo Chung, an actress of half-Zimbabwean and half-Chinese descent, really made the story and characters come alive. People wrote and told me they found Denis the cousin an entertaining character and really identified with Ching’s relationship with her grandmother, ” says Chiew.

“Jeremy Osborne is fab, as is Sweet Talk Productions, especially with sharing their platforms and giving opportunities to minority writers and actors and actresses.”

In the last few months in lockdown, she has been busy concentrating on work and catching up on reading.

“I’m dying to write this Malaysian novel set in Ipoh next. But I need to travel for research, and Covid-19 has put a temporary dampener on my plans," she mentions.

“Also, I'm thinking of submitting the written version of The Seductive Properties Of Chiffon Cake to a food anthology. Any takers out there?”

Listen to The Seductive Properties Of Chiffon Cake on BBC Radio here. 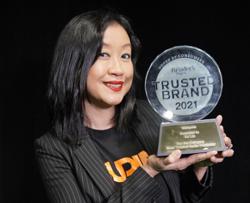