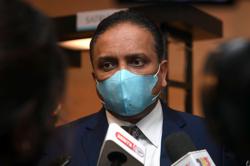 "I wanted to celebrate the art of storytelling around the campfire on the darkest night. I wanted to share with my readers how it all began for me (in Taiping) when I was a scared little kid growing up in a time where supernatural beings were a part of our lives. Most of all, I just wanted to keep the memories alive,’ says Oui. Photo: Handout

Author Julya Oui practically grew up listening to ghost stories and weird superstitions. As a result, she had a fear of the dark when she was young.

Born in raintown Taiping, Perak, Oui knew all about the spooky roads to avoid to get to her Assam Kumbang home, and even the rain trees at Taiping Lake Gardens had a creepy vibe at night.

There was no shortage of unexplained tales in Taiping. Even certain corners in her own home compound were scary.

“The scariest place in Taiping? When I was young it used to be the coconut tree in Assam Kumbang, where the wise old owl lived and will call your name three times to announce your death, ” recalls Oui, 57, in an interview.

”Also my backyard in Pokok Assam where the toilet used to be. Going there in the dark was the single most terrifying event anyone could ever experience. This beats all the haunted houses, ” she adds.

With a childhood like that, it’s no wonder that Oui turned out to be a horror writer.

She has published several short story horror collections, including Bedtime Stories From The Dead Of Night, Here Be Nightmares and There Be Monsters.

Oui’s latest book, Taiping Tales Of Terror, pays tribute to the scary stories she used to hear in her hometown when growing up. The book, available now, is published by Penguin Books.

“Taiping was very dark at night (at the time) because there were very few street lamps. We used to have humongous trees by the road side and undeveloped areas in between shops. So, whenever (there was) a news report that a werewolf was sighted or an ‘orang minyak’ was on the loose, I mean where else would they hide but in small unassuming towns like Taiping?” says Oui, who still lives in Taiping today.

“Besides, everyone used to believe everything the newspapers reported and thought that horror movies were based on the truth. We had no Internet to filter out fake news back then.”

Taiping Tales Of Terror tells the story of a group of boys who go camping one night. They participate in the time-honoured tradition of telling ghost stories around the campfire. Each boy tells a story, resulting in 13 terrifying tales. As the night comes to a close though, a dark discovery is made.

This framing device, says Oui, is inspired by her camping days in school and field trips, which she describes as some of her best childhood experiences.

“When I started on the journey to create this book I wanted it to be different from the rest of my previous books. I didn’t want stand alone stories that had no relation with the other.

“The campfire storytelling idea was appealing, but it wasn’t enough to flesh out the stories. It took me a few tries to come up with the correct voices and how to meld the story within a story and to top it up with a nasty twist at the end, ” she explains.

Each tale in Taiping Tales Of Terror has a believable bent, making them more scary. The Confessions Of A Gambling Man is a story of a greedy man who gets more than he bargained for after conducting a dark ritual. The Boy Who Cried Hanged Man is about a prank gone horribly wrong, while Hunt For The Were Tiger is a tale of a monster causing havoc in Taiping town in the 1960s. All stories take place in familiar locations in Taiping, including Maxwell Hill, the Burmese Pool, and the Taiping Lake Gardens.

Oui says the stories in the book were based on ghost stories she had heard when was young. For each story, she only had about a paragraph of material to work on, the rest she left it to her imagination.

“Everyone in Taiping back then was a storyteller. Everyone who is anyone usually had some kind of ghost story to tell. How could I not be terrified of the night?” says Oui.

One of her favourite stories in the collection is titled That Oily Thing, which features a frightening scene where a character discovers something lying next to her in the dark as she tries to sleep.

“The scene was in truth, a terrifying experience my mum went through. Just as in the story, my family lived in a servant’s quarters and someone broke into the room to lay beside my mum. But, of course, in this case my mum screamed for help and the perpetrator took off in the night, ” says Oui.

Sadly, Oui mentions, modern day Taiping has a lot less ghost stories than the Taiping of her youth.

“The younger generation is too caught up with technology in the hands so much so they hardly have time to see any ghosts passing by. The good thing is they are not as frightened as we were when we were kids. The bad thing is, they miss out so much on the simple joys of life like sitting around a campfire telling stories, ” she says.

For someone who writes about scary stories, does Oui herself believe in ghosts?

“I do believe that there are earthbound spirits who are trapped here, held back by their own guilt or unrest. But I don’t believe in anything I write although I want to, ” she concludes. 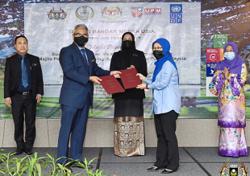