A screen shot of Kakiseni president Low giving a speech during the Boh Cameronian Arts Awards 2020 nominees event, which was announced on Facebook on June 2.

The list of nominees for the upcoming Boh Cameronian Arts Awards 2020 were announced on Facebook on June 2 in a virtual event hosted by actor/singer Sharizan Borhan.

He was joined by Low Ngai Yuen, arts portal Kakiseni’s president, Caroline Russell, chairman of Boh Plantations, and Tan Sri Norliza Rofli, the director-general of the National Department for Culture and Arts (JKKN).

The awards series, popularly known as the Cammies, is organised by Kakiseni. This year’s Cammies will be streamed via Facebook on July 2, with 37 award categories, including the Best Of 2019 award. It will be hosted by Dominic Lucien Luk.

“We are seeing a lot of arts practitioners gathering and convening online, trying to figure out how to not only survive, but make sure that the performing arts can still be alive during this pandemic and lockdown," says Low.

“No better time to be reminded of the 77 shows submitted in 2019 (for the Cammies) that deserve to be recognised for their excellence. Also, the Cammies must take place to remind the industry of hope and that we should start to dream ahead, ” she adds.

Dominating the musical theatre category are original works Euphrasia The Musical and The Working Dead. Both productions are vying for all 12 awards, including the best original score, best original book, best musical direction and best direction awards.

In theatre, veteran stage actor Pearlly Chua is nominated for the best actor in a leading role category for her performance in The Monologues 2019: Stella Kon’s Emily Of Emerald Hill. Loh Kah Weng for Team Theatre’s Men Don’t Cry and Wei Bin for The Door are also nominated in this category.

Ten productions are vying for the best prize of the lot, the Best of 2019 award. These are Bach: St Matthew Passion, Buka Langkah: Inner Resonance, Men Don’t Cry, Mixed Bill Of Contemporary Dance Works, Pohlithik, Seni Tiga #10: Impermanence, The Door, The Working Dead, Ultimate Music Crawl and Music of Words: If Music Be the Food Of Love, Jazz On. 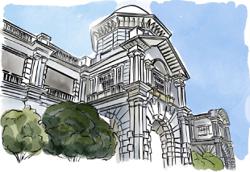