A screenshot of Eliasson's 'Wunderkammer', which features AR sculptures that users can virtually place around their homes, including flowers, rare birds, insects, and the Northern Lights.

"Wunderkammer" features AR sculptures that users can virtually place around their homes, including flowers, rare birds, insects, the Northern Lights, a compass that always points North and a Little Sun, Eliasson's solar-powered lantern.

The artist will add more ephemeral phenomena and artistic experiments to the collection, which is available to experience for free through the Acute Art app. 'It is about creating spaces that meld the everyday and the extraordinary - spaces that evoke vivid perceptions and embodied engagement,' says Eliasson about his new AR project. Photo: AFP

While "Wunderkammer" marks his first foray into AR, it is the second digital project Eliasson has released amid the Covid-19 pandemic.

The conceptual artist debuted in April a new participatory artwork in celebration of Earth Day, which was commissioned by London's Serpentine Galleries as part of their "Back to Earth" program.

Eliasson released nine coloured images of the Earth with a dot in the centre of the sphere, which are collectively titled "Earth Perspectives."

Viewers are invited to stare at the dot for 10 seconds and then focus their gaze on a blank surface where an afterimage will appear in different colours.

The "Earth Perspectives" initiative invites people around the world to think about the state of the Earth, while collectively envisioning a better future.

"Today, 'the world as we know it' is a phrase of the past. The current health crisis has brought our societies close to a halt, affecting our economies, our freedoms and even our social ties. We must take the time to empathise with all those struck by the crisis and also seize this opportunity to imagine together the earth that we want to inhabit in the future - in all its wonders and beauty, in the face of all the challenges ahead of us," Eliasson said of the initiative in a statement. - AFP 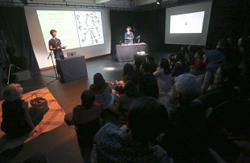