From songstress to artist, Chelsia Cheng is using her art to help people.

In pop culture circles, Puan Sri Chelsia Cheng will always have an esteemed place and a loyal following, thanks to some very catchy pop tunes she sang in the 1970s. Songs such as Dark Side Of Your Mind, Graduation Tears and One Summer Night are still remembered to this day, as are her songs with Hong Kong group The Wynners.

In 1976, at the age of 19, she won the leading actress award at Taiwan’s Golden Horse Film Festival for her role in the movie Chelsia My Love.

The former songstress held an exhibition of her works in South Korea last month to raise funds for charity. The exhibition, held from Oct 26-30, was organised by the Lion-Parkson Foundation and the With Heart Foundation of South Korea.

“I’m very excited! It took me more than one month, almost two months to prepare for this!” said Cheng, 62, at the launch of the exhibition in Daegu, South Korea. 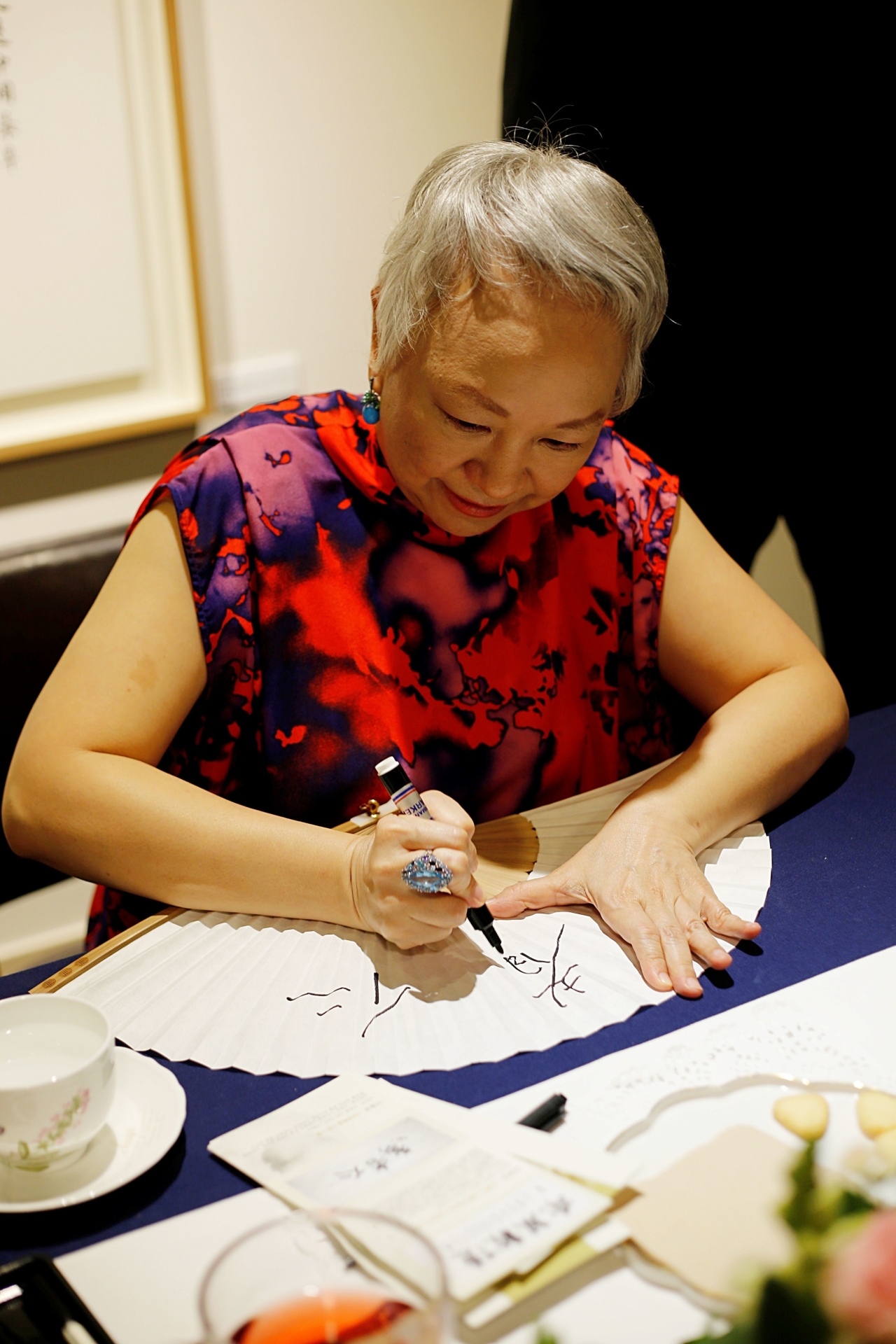 Cheng signing a fan for a fan during her exhibition's opening ceremony. Photo: Choi Jung

The charity exhibition was mooted when Cheng met Kim Yong-Beom, the chairman of the With Heart Foundation some time ago. Kim suggested that his foundation join forces with the Lion-Parkson Foundation for charity.

The exhibition featured works in calligraphy and Chinese brush painting, art styles that are close to her heart, Cheng says, as she had missed the opportunity to practise them when she was young.

“I was educated in English when I was young, during British colonial rule. I neglected Chinese culture at that time because you needed English to get a job and do well in your exams. So I put Chinese aside for a while,” says Cheng who grew up in Hong Kong.

“And then at 45, I decided to take Chinese calligraphy lessons in Malaysia. And I suddenly realised what I had missed for all these years. I was so regretful, and decided to learn more about my own culture, and try to promote my culture every time I get a chance.”

Indeed, as homage to this, one of Cheng’s works is based on ancient oracle bone script, the oldest form of Chinese writing. Most of the works in her exhibition are stylised depictions of Chinese characters and phrases, some of them accompanied by illustrations of nature or landscapes.

Her favourite work is a calligraphic depiction of the Chinese characters “wu wei” (“inaction”, referring to a concept of statecraft from Chinese and Taoist philosophy), taken from Daodejing, the famous book by Taoism founder Laotze. This is because it turned out completely different from what she expected.

“I tried so many times, and I thought it wasn’t good enough. I wanted to give up at one time, I had no feeling, no inspiration.

“But then I decided to make it more interesting. I think I see two horses in the piece, playing freely. Now, when I ask people about interpreting this piece, they have different answers, and I feel very pleased,” Cheng laughs.

The opening of Cheng’s exhibition was well-attended, with art lovers turning up from as far as Seoul to see the works on display. Many fans of Cheng’s old music also attended, asking their idol to autograph their old records!

The exhibition eventually raised over RM330,000 for charity. The exhibition also saw the launch of the Korean version of Cheng’s book, My Cause, My Music, a compilation of articles Cheng wrote for a Malaysian Chinese daily from 2014 to 2016 detailing her work in art. This new Korean version now also includes articles Cheng wrote for a Korean newspaper in 2018.

“I’m very excited. Also, the fact that I’m a Chinese lady from Malaysia printing a book in Korean ... I can’t help but feel proud of myself,” Cheng says.

Asked about future plans, Cheng says she had once planned an art road show to go to Beijing, Hong Kong and other places. However, after holding three exhibitions (in Malaysia, Jeju Island in South Korea, and Taipei), she became ill from cancer and took two years to recover. Now, she’s fired up to restart those plans.

“I’m also planning my 70th year exhibition. For eight years later! Because I want to do something more creative and interesting, but I’m still not satisfied with my standards. So I promised myself that in eight years, I have to do more and get more experience.

“When I turn 70, I will hopefully be at another level. And I’ll definitely do this in Malaysia,” Cheng says.
Article type: metered
User Type: anonymous web
User Status:
Campaign ID: 18
Cxense type: free
User access status: 3