There will be no shortage of art exhibitions across the country celebrating man’s best friend this year. However, The Art Gallery in Penang is probably the first off the blocks with an exhibition called Year Of The Dog 2018, which captures the art and heartfelt stories put across by a diverse bunch of artists about their canine subjects.

The Art Gallery’s space, located on Bellisa Row in Pulau Tikus, is filled by all sorts of adorable, playful and mischievous paintings of canine breeds. The show, featuring 34 artworks from 15 artists, is presented through a broad spread of mediums such as oil paints, watercolour, Indian ink, ball pens, charcoal, colour pencils and even graphite on canvas, paper and wood.

But it is the personal stories behind the works that will make the viewers enjoy this exhibition.

Among them are paintings like Smile On A Windy Day and A Playful Day by Selangor-based artist Yew Souf. Both depict his dog Jessy, a golden retriever and mongrel mix.

Yew Souf celebrates his dog Jessy as a pup and adult dog through his artworks. Photo: The Star/Asri Abdul Ghani

“My parents adopted her about seven or eight years ago. The owner of her mother didn’t want Jessy, so she became part of our family,” says Yew Souf, 44, about his charcoal on paper works.

“I’m also afraid of lizards, so I’ve also painted her helping me chase them away,” he adds with a laugh at the recent exhibition launch. The creative director of an advertising agency, originally from Bukit Mertajam in Penang, also has a third piece in watercolour on display. It is aptly titled Second Chance, and it is a painting of Yew Souf’s other dog Jerry, a mongrel.

“Jerry was abandoned by a neighbour who moved away. Left on the streets, he got into fights with other dogs and had many injuries. Later, he started sitting in front of our house. We fed him and we eventually took him to the vet and nursed him back to health,” explains Yew Souf.

Today, the artist says that Jerry is fine and is also part of the family.

“This is like a second life for him. I painted him looking at butterflies as these symbolise rebirth. We think he’s about 10 this year.”

“It’s a timely reminder about loyalty that we should learn from dogs. When the owner is away, the dog just can’t wait to be reunited ... just like how parents eagerly look forward to their children coming home for festive seasons such as Chinese New Year,” says Lee, who is an IT manager.

The 51-year-old also has two other works – a portrait of a dapper schnauzer titled GQ K9 Preppy Puppy and a playful poodle enjoying a spin in the park in Pawsitively Excited on show.

“Compared to the Jack Russell, which is by nature a hunter and more active, schnauzers are more clingy and want attention,” he adds.

Koay Sheng Tat speaking about his work called Stare, which talks about freedom for pets. Photo: The Star/Asri Abdul Ghani

It’s simple enough scene, but Koay has a message to convey. The piece reflects his belief that pet animals should have freedom.

Koay also says it reflects how children nowadays spend all their time on gadgets, and that they hardly get to enjoy the outdoors.

“Our pets, just like children, should be able to spend time enjoying and exploring the outdoors rather than always being locked up indoors. It’s a commitment in owning a pet, especially a dog. Take it for walks, don’t keep them at home,” says Koay, a multimedia designer when not painting.

“John was a stray dog, which we adopted. He passed away 10 years ago. I didn’t want him to be lonely in the painting, so I gave him a companion. With it being Chinese New Year, I added the Chinese character for luck,” says Choh, 50.

“With canine art, you often find themes like alertness, courage, devotion, faithfulness, love, loyalty and protection. As dogs became more domesticated, they came to be seen as companion animals, and were often painted sitting with their owners,” says Tan Ee Lene, The Art Gallery director.

Among the Chinese community, dogs are an auspicious animal.

“This exhibition is interesting not only to dog lovers but to the broader art community because of the diversity of the artworks on one subject matter. Each painting has its own story behind it,” adds Tan.

“Let them be reminders of how much joy a dog can bring to our lives. They are innocent and helpless animals and deserve protection from cruelty. Once they love, they love unconditionally till their last breath.

“Rarely is there anything in life that is more pure and simple than a dog’s love.” 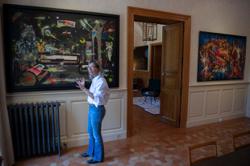